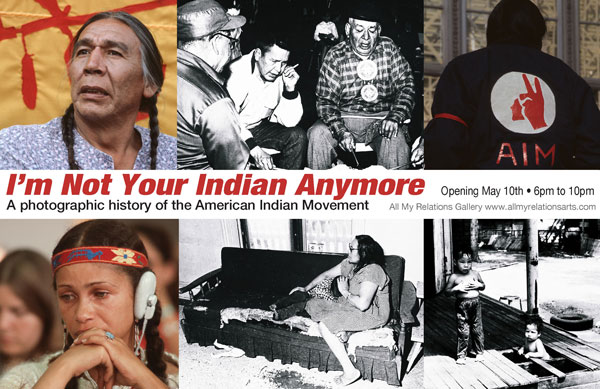 The American Indian Movement will open its first exhibit telling the story of its history on May 10th at the All My Relations Gallery. Planning for the exhibit has been underway for months, as Executive Director Clyde Bellecourt and AIM’s board of directors worked to narrow down thousands of choices to a fraction of the holdings that depict the history of the Movement. They chose a photographic exhibit, featuring the work of Dick Bancroft, long known informally as the “AIM photographer,” and Roger Woo, a photographer who worked in black and white in AIM’s earliest years.

Woo joined the AIM patrol in 1968, at the beginning of the organization’s formal activities. He took photographs of elders in Minneapolis neighborhoods, some of the early pow wows and children at play. He recorded the poor living conditions in the Indian community and students in schools and after school programs. Woo was born in Canton, China and he came to Minneapolis as a youth, graduating from West High School and the University of Minnesota. He began his journalistic career by following his curiosity and his heart, reaching out to populations in need, just as he remembered those in his homeland China.

Dick Bancroft is a Minnesota native, who had an interest in photography since childhood. When he and his wife Debbie went to Africa, Dick learned the power of capturing portrait images of people whose personal dignity and humanity shown through in his photographs. When he returned to Minnesota, he sought out other places and people he could photograph and by happenstance came to be introduced to AIM in St. Paul. He never left his subject, following the Movement throughout the U.S. and overseas. His collection of slides, photographs, and AIM posters numbers into the many thousands. Bancroft has put together color photographs and slides from his association with AIM into a book, “We Are Still Here: A History of the American Indian Movement in Photographs,” co-authored by this writer, which chronicles the sweeping history of the Movement from 1970 to 1981, including some of the most well-known events in the organization’s history. The book, published by the Minnesota Historical Society Press will be released in May.

In addition to the primary photographers’ work, several photographs by Kevin McKiernan, the only working journalist to issue reports from inside Wounded Knee in 1973, and other photographers will be on exhibit. An AIM patrol jacket, buttons, booklets, school literature, other documents and objects will be on display.

The exhibit will feature traditional foods on May 10th and spiritual elder Edward Benton Banai will officiate at the exhibit opening. Renowned educator Elaine Salinas will present a lecture on the survival schools on June 15th and other lecturers will be scheduled for June 8, 22nd, and 29th. Dick Bancroft and this writer will autograph copies of their book on May 25 and June 1.

From 1968 to the present, AIM has had a history of community building but the Movement also made history. In 1968, Minneapolis and the Minnesota reservations reverberated with reports of beatings, arrests, and drastically low education results for American Indian children. The Movement’s first order of business was to create safe streets with fewer attacks on Indian people. The second order of business was to create safe schools where Indian children could learn their own culture in environments that were supportive of children and valued parents and families.

AIM has a 40-year history of successfully educating over 75,000 k-12 students, at Heart of the Earth Survival School in Minneapolis and Red School House in St. Paul. The Circle of Life Academy on the White Earth Reservation in Minnesota, is still in operation. AIM member Dick LaGarde founded it, illustrating that AIM’s mission still focuses on those yet to be born.

AIM is now archiving thousands of documents, objects, and art in anticipation of moving to permanent space for the Interpretive Center. Plans are underway to build space near Franklin Avenue, in the heart of the Indian Cultural Corridor.

The title of the exhibit is taken from the song written and performed by the late AIM leader, Floyd Red Crow Westerman. He began writing music in 1968, inspired by his friend Vine Deloria, Jr., the renowned writer. The song describes the deadly relationship between Indian people and the federal agency charged with carrying out the trust responsibility of the U.S. government under the more than 500 treaties made with sovereign Indian tribes.

BIA, don’t you blame me for your problems

I’m not your Indian anymore

You belong to white man

BIA, you can’t change me, don’t you try

We don’t want your white man rules no more

We can live our own way

Clyde Bellecourt and William Means are two remaining Movement leaders who live in Minneapolis. Both have long histories with the events that have characterized AIM’s public image, and they continue to lead the Movement into the future. Historic events include the development of the Twenty Points delivered to the White House in the Nixon administration in 1972, the occupation of Wounded Knee in 1973, the formation of the International Indian Treaty Council in 1974, the first Geneva conference where the Declaration of Rights was first drafted in 1977 and many others. The Declaration was adopted by the United Nations thirty years later in 2007 and was accepted by all except four colonial powers: New Zealand, Australia, Canada, and the United States. All eventually voted for acceptance, with the U.S. being the very last. A global effort, affecting over 300 million indigenous people is underway to teach the rights they have under the Declaration.

Laura Waterman Wittstock is an author, radio producer, CEO of Wittstock & Associates, scholar of American Indian History and Culture with other accomplishments and credentials too numerous to list here. See the Phillips Educators website for indepth interview and biography amongst others. www.pieducators.com/wisdom/laura_waterman_wittstock