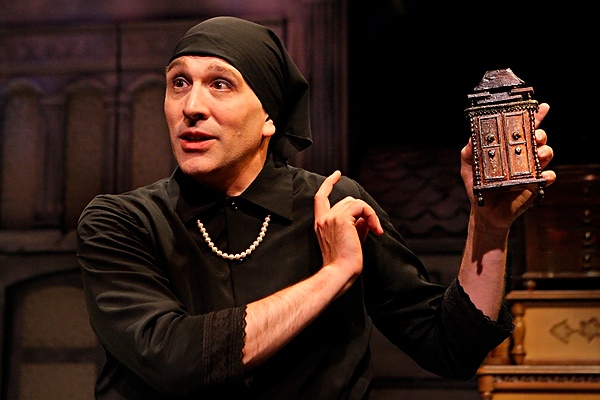 I wasn’t quite sure what to expect from I Am My Own Wife, which opened this weekend at the Jungle Theater in Minneapolis. Though it opened on Broadway in December of 2003, and Bradley Greenwald won an Ivey Award in 2006 for his performance of the 30+ characters that he plays again in this run, this is the first I had heard of the show, the true story of Charlotte Von Mahlsdorf.

To be honest, I thought I was going to see a Holocaust play that dealt with a non-Jewish victim.

I was prepared for a somber evening and to come away with one more story to add to my growing list of different perspectives of WWII. Growing up, I saw all the footage of the atrocities from the concentration camps so many times, and it was years before I began to move beyond those images and explore the stories and lives that happened before the arrival at the camps.

Charlotte was actually born Lothar Berfelde in Berlin in 1928. His father, Max was a Nazi Party leader who forced Lothar to join the Hitler Youth at age 14. By 1944, when his mother left the family, Lothar kills his sleeping father with a rolling pin after being threatened by him with a gun, insisting that Lothar choose between his parents. After 4 years in a jouvenile prison, Lothar escapes during a bombing in the last days of the Third Reich, and soon after he began dressing in more feminine ways and “Lothar” becomes Lottchen.

Though the War, Berlin, and the Stasi, (the Ministry for State Security in East Germany) were all part of the backdrop for the play, this theater experience was far from what I expected, and what I took away was much more of a character study than another Holocaust story.

I have seen one-person shows may times before, and I am always intrigued by one actor’s ability to inhabit so many different characters in one play. Some actors, however, hold the audience’s interest, and some, not so much. This particular production far surpassed my expectations and was one of the most outstanding singular performances I have ever seen.

The story itself is compelling, well told, and leaves the audience much to contemplate. Doug Wright, the playwright, who won both a Pulitzer Prize and a Tony Award for writing this play, visited Charlotte von Mahlsdorf (the main character) numerous times in Berlin, and came to love Charlotte like a grandmother.

He struggled in the writing of the play as he tried to reconcile the image of Charlotte as a hero with the realities that came to light that turned out to be less than ideal.

According to Director, Joel Sass, “Charlotte’s story is more than a heart-warming tale of an eccentric who outsmarted the Nazis and the Communists. Her story asks us to consider: What are the moral costs of survival?” As the play progresses and we learn some of the less than heroic decisions that Charlotte has made, we realize we have a rare glimpse into a real person’s life, not just the positive spin on the heroic deeds that often become what is remembered.

The story of Charlotte’s life (born Lothar Berfelde) is summarized in the playbill so I will not repeat it here. There’s no doubt, though, that the young Lothar did not live a carefree life, and his choice to dress as a woman and take a woman’s name toward the end of WWII becomes almost a non-issue, perhaps because it is Charlotte that we first encounter, and as we learn of the difficult early days of Lothar’s life, building a new life seems only natural.

Though the story is interesting, it is watching Bradley Greenwald portray all 30+ characters that made this theater experience a night to remember.

I am sure I will google Charlotte Von Mahlsdorf to learn even more details of her life and refresh my memory on some of the things covered in the show. But no googling or research will yield the exceptional abilities that Greenwald revealed in his masterful embodiment of Alfred at the beginning of Act II, the man who Charlotte befriended, but ultimately had sent to jail.

I cannot say enough about how masterfully Greenwald was able to shift from one character to another. Though it was billed as a one-man show, there were times, in particular in watching Alfred, that it seemed there was a new person on the stage.

Greenwald moved so seamlessly from one character to another, changing voice inflection, his physical appearance in so many subtle and profound ways, that I found myself wanting to take an acting class from Greenwald, or listen to him talk about how he prepared and how he manages to be so incredibly believable, not in portraying one complex character, but all of them, and having them interact with each other so effectively as well.

I was so taken with Greenwald’s performance, that I almost feel I should return to see the show again to pay more attention to the story of Charlotte’s life. But like I said, I can google that easily enough. If I decide to return to the Jungle Theater in the coming weeks, it will be watch Greenwald’s magic unfold again. I cannot say enough about his outstanding performance!

Photo: Bradley Greenwald in “I Am My Own Wife” at the Junge Theater (Photo by Michal Daniel)