Interstate 35E played a major role in destroying downtown Saint Paul. Along with Interstate 94 and Hwy 52, it forms a series of concrete trenches and highway interchanges that pin downtown against the Mississippi River and cut it off from its neighborhoods. In addition to destroying downtown, Interstate 35E creates a huge, north-south chasm that cuts Saint Paul in half, separating east from west. There are only a few places to cross this chasm– Phalen Blvd, Cayuga Street, Maryland Avenue, Arlington Avenue and, at the northern border, Larpenteur Avenue. With the exception of Cayuga Street and maybe Arlington, all of these crossings are awful, car-choked, arterial boulevards with little or no provision made for pedestrians and bicyclists. The only pleasant and marginally safe places for pedestrians and cyclists to cross I-35E are the Cayuga Street underpass, a bicycle-pedestrian bridge on the Gateway Trail and a bicycle-pedestrian underpass near York Avenue. Unfortunately, MnDOT’s “I-35E/Cayuga Project” is about to destroy all three of these crossings.

The federal government no longer gives out money to widen highways, unless a state DOT is creating “High-Occupancy-Vehicle” or “HOV/Tolling” lanes. HOV/Tolling lanes (what we call “MnPASS lanes”) can be used by buses and multiple-occupant vehicles to speed trips into and out of traffic-congested downtowns. The new twist is that single-occupant vehicles can also use these lanes if they pay an electronic toll. It’s called “Fast Lane Tolling” and was slipped into Federal Highway Legislation almost a decade ago by Mark Kennedy, former US Representative from Minnesota. State DOTs love Fast Lane Tolling because it generates extra, dedicated revenue for their agencies with which they can build yet more highways. This and the fact that it qualifies for federal money is the reason that MnDOT and many state DOTs are building these new lanes. They sell them to cities and states by saying they’re somehow “progressive” or “innovative transportation solutions” that will get users to pay road costs, decrease travel times and enable Bus Rapid Transit. In reality they are just road-widening projects that generate revenue for highway departments. If DOTs were really committed to Bus Rapid Transit and progressive transportation, they could convert existing lanes to HOV/Tolling lanes for a fraction of the cost. By taking away a regular travel lane, they would reduce the volume of single occupant vehicles entering a downtown and they would create real incentives for people to stop driving and use transit. What’s more, if DOTs were really committed to progressive transportation, they would use the toll revenues from these HOV/Tolling lanes to subsidize land use changes and better city and regional public transit. In reality, they just use the toll revenues to build more highways.

The I-35E/Cayuga project is a road-widening project. It will add a northbound and southbound MnPASS Lane to what is already a six-lane freeway, from downtown Saint Paul up to Little Canada Road, near the I-694 interchange. To do this, almost every bridge over I-35E must be torn out or rebuilt because the abutments for these bridges are not far enough apart to accommodate the additional lanes. As a result, the project is projected to cost $225 million– a quarter-billion dollars for five miles of roadway. This is more money than is spent on bicycle and pedestrian infrastructure in the entire United States! MnDOT says that “many of these bridges needed to be rebuilt anyway” but this is not entirely true and the fact that they have to be rebuilt longer, with brand new abutments is adding major costs to the project. In addition, MnDOT will be adding on-ramps and off-ramps at Cayuga Street to ease congestion on the University Avenue ramps, further south. The east end of Cayuga Street will simultaneously be reconfigured to connect to Phalen Blvd. By adding this connection and all these freeway ramps, a sleepy, pleasant-to-bike-on street that crossed I-35E, will now become another dangerous, car-choked, arterial boulevard.

To cut costs, MnDOT is tearing out both the Gateway Trail bike-pedestrian bridge and the bike-pedestrian underpass near York Avenue and not replacing them. Bicyclists and pedestrians will be forced to cross I-35E on Maryland Avenue (a motor-vehicle hell-hole), on Cayuga (a soon-to-be motor-vehicle hell-hole), or on Arlington Avenue. The Arlington Avenue Bridge has been widened slightly so the Gateway Trail can be redirected over it. Cyclists, joggers and pedestrians will now have to cross at Arlington but there won’t be a direct trail link on the west side of I-35E to take them south for several more years, because completing this link and making up for the loss of the bike-pedestrian bridge is simply not a priority for MnDOT.

So, to summarize, we will be spending a quarter billion dollars on an unnecessary road-widening project that will enable rich people to get to work ten minutes faster, that will make bicycling and non-motorized crossings of I-35E worse, and will pump thousands more vehicles into downtown Saint Paul, a place already destroyed by parking lots, freeway trenches and traffic. The I-35E/Cayuga Project is the worst thing to happen to Saint Paul in the fourteen years I’ve lived here.

Cities are required to give “Municipal Consent” for large highway projects. Unfortunately, Municipal Consent hearings are often just meaningless, pro-forma speed bumps. The hearing for the I-35E/Cayuga Project wasn’t advertised but was just one item on a regular Saint Paul City Council Wednesday night public hearing. I was the only person to testify against the project. The city council vote in favor of it was unanimous, including at least two council members who should have known better. Mayor Coleman gave his blessing and the project is now well under way.

If we want to revitalize our cities and save ourselves from catastrophic climate change, we simply cannot keep building new highways and new highway lanes. It’s that simple. No amount of greenwashing can make this project look good. MnDOT just took an asphalt dump on our city. At meeting after meeting, MnDOT says they don’t have the money to make bicycle and pedestrian improvements to Snelling Avenue or other state highways in Saint Paul, something they could do for the cost of a few HAWK signals and some traffic islands. Yet they have a quarter-billion dollars for this horrible highway project or three quarters of a billion dollars for a new Stillwater Bridge.

Somehow, we all need to become informed about where and when these projects are happening, pressure our elected officials to reject them and show up to these municipal consent hearings. We need a state or national organization that is dedicated exclusively to stopping all new highway projects and redirecting this money to alternative modes of transportation and better land use. The existing environmental and alternative transportation groups aren’t getting the job done. If we don’t act, MnDOT will just keep building roads from now ’til doomsday. Given the rate of climate change, doomsday might not be far away. 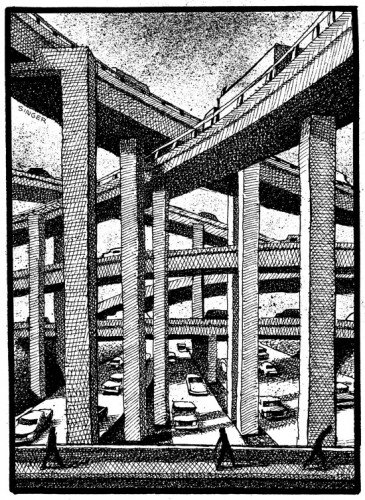