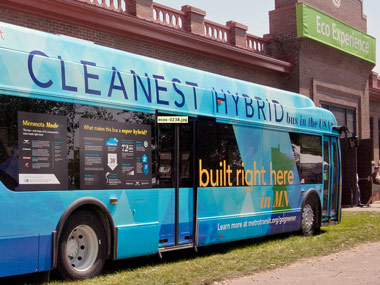 Metro Transit’s newest hybrid-electric buses were unveiled at the State Fair, a fitting introduction for state-of-the-art technology that’s made right here in Minnesota. The rollout drew some unsurprising criticism from the autocentric right over the federal government’s $1.2 million contribution to the $1.5 million purchase of two buses, but the naysayers should try telling that to the Minnesota workers who built these low-emission, high-efficiency vehicles.

The Xcelsior buses, touted as the nation’s cleanest hybrids, were assembled at the New Flyer plant in St. Cloud from components manufactured by private enterprises in Arden Hills, Bloomington, Fridley, Minneapolis and St. Joseph, according to Metro Transit. These firms employ more than 3,700 Minnesotans. Tell me again how government can’t create jobs. (It also does so — often with an 80 percent federal match — building and maintaining the roads and bridges that most conservatives consider a birthright.)

Critics might also run their argument past all the people along busy transit routes who can breathe freer. Ditto for Minnesota taxpayers who will shoulder less burden for fueling and maintaining energy-sipping buses. Metro Transit maximizes the efficiency of hybrids that capture braking energy by concentrating that 15 percent of its fleet on routes with the most stop-and-go traffic.

The agency also has invested in less expensive diesel buses that spew at least 80 percent less pollution than older models. And technology upgrades to its garages and other facilities have cut its utility bills by two-thirds over four years, Metro Transit general manager Brian Lamb told Steven Dornfeld in MinnPost.

Remember, too, that Minnesota benefits from far less per-capita federal spending than most conservative states, many of which are full of defense contractors. The more we can focus the relative pittance we get from Washington on Minnesota-grown efficiency, fuel savings and pollution reduction, the better off all Minnesotans will be.