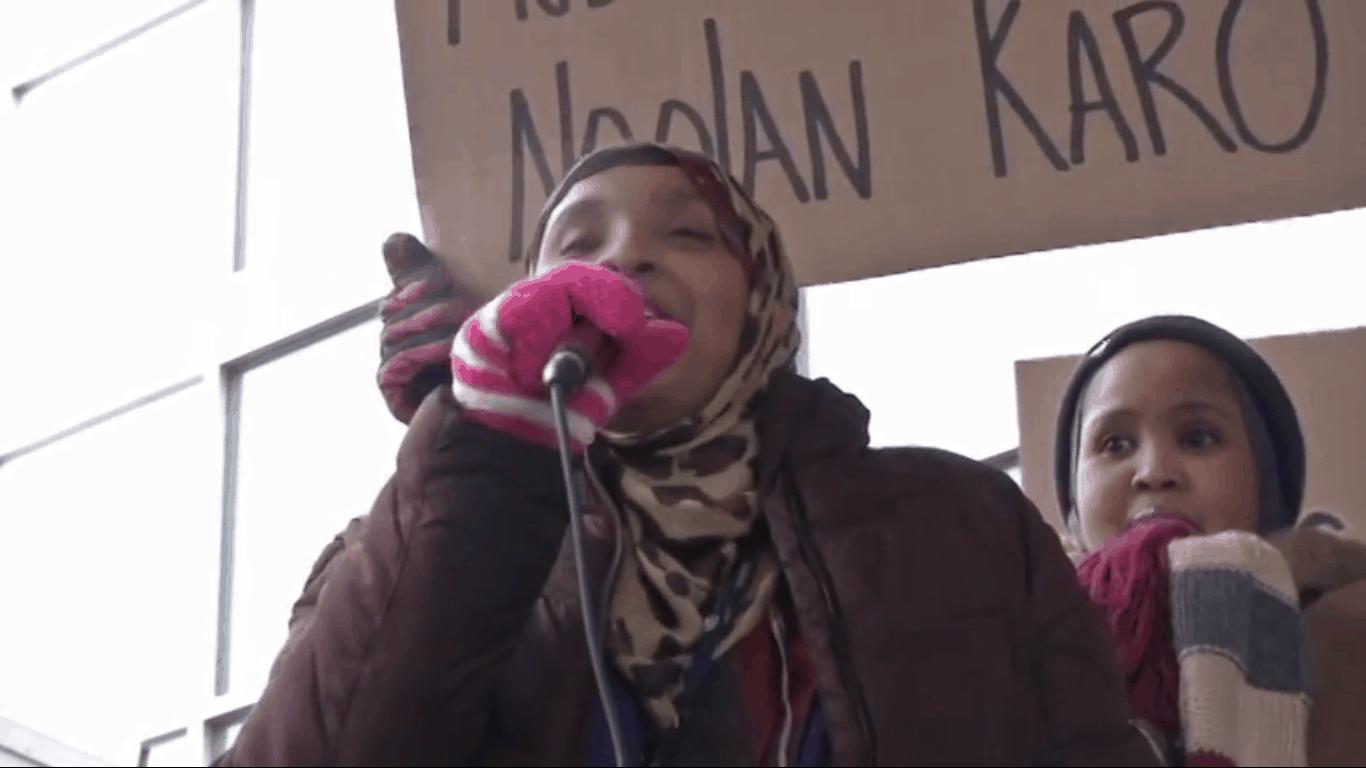 Hundreds of workers and their supporters rallied at the Minneapolis-St. Paul International Airport to call for raising the minimum wage at the facility to $15 an hour and union rights. Many airport workers struggle to support themselves and their families on wages as low as $8 an hour.

Airport worker Abdi Ali spoke about the critical services that Delta sub-contractor Air Serv workers provide, such as wheel chair support, to elderly and disabled travelers. “Without Air Serv workers, many of our state’s residents wouldn’t be able to visit their family – wouldn’t be able to use our airport,” said Ali, contrasting this support with the low pay and lack of benefits these employees receive.

“As a mother of two, all the money I make goes into paying for food, rent, clothes and bus fare. I have to catch three buses to get to work, but I can’t save for a car because there is no money. I only sleep a few hours at night because between work, travel and kids, I have no other time,” said Randa Jama, a Wheelcahir Assistant for Air Serv.

The opposition that the 15 Now campaign faces was revealed when Kip Hedges, a baggage handler at Delta Airlines, was fired on Tuesday for his remarks in a Workday Minnesota video. He had stated that many Delta employees make less than $15 an hour and that even those who make more than that amount are concerned because low wages hurt everyone.

“Like a lot of companies, in the past few years, they’ve turned more and more to part-time low wage labor – people who have to work two or three jobs to support themselves and their families and a lot of big companies don’t want that fact revealed. I’m sure that most of Delta’s passengers don’t know that the people who clean the aircraft , a lot of the people who handle their bags, are paid as little as eight dollars an hour.”

The crowd chanted, “Bring back Kip!” Hegdes thanked rally attendees as well as union members across the country for their support. In a “mic check” satirizing Delta’s decision to fire Heges, the crowd repeated after him as he spoke the sentences from the video that offeded the airline’s executives. Hedges put the situation into perspective.

“I want my airline to prosper. I want them to succeed. In fact, they are prospering and they are succeeding because of the work of Air Serv workers cleaning the cabins of the aircraft, because of the baggage handlers, because of the janitors, the flight attendants, the pilots – union and non-union workers helping to make this airline one of the best in the world.”

U.S. Representative Keith Ellison highlighted the significance of the rally and its relation to recent demonstrations over police actions.

“Today is the culminating day of a whole week of action. Workers in 50 cities in 35 states have had fast food workers strikes this week. And Americans crying for justice from the hands of law enforcement were protesting this week … Here is a fact: You don’t sell loose cigarettes if you have plenty of money in your pocket. Eric Garner was killed because he was trying to make a living in a very difficult situation… You cannot separate the law enforcement from the economic issues.”

After hearing from the workers and supporters, the crowd marched down the airport entrance road and stopped traffic coming into the airport, then marched back to a parking area across from the terminal.

“The MAC has the authority to raise the minimum here to $15. They’ve done it in San Francisco; they’ve done it in San Jose, St. Louis. And they’re trying to do it in Seattle, but the airlines are suing them. And we say workers at the airport here deserve 15, whether they’re organized in a union or not. All workers deserve to be paid a living wage.”

15 Now members and allies have collected over 2,000 signatures in support of the $15 an hour minimum wage at the airport and spoke to the commission at the September and October meetings. They plan to come back to the December 15 meeting to continue the discussion.