“We are building people power. We are movement building,” Communications Workers of America President Larry Cohen told the crowd.

The CWA represents 700,000 workers in telecommunications, media, airlines, public service, health care and manufacturing, all areas where jobs are under threat due to free trade deals. 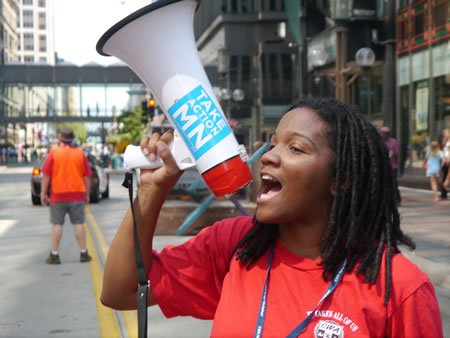 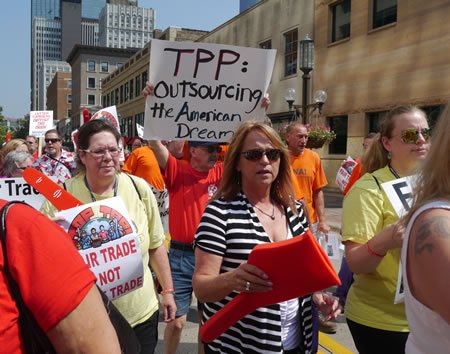 The United States and 11 other Pacific Rim countries will meet this week in Brunei to discuss what could be the largest trade agreement in U.S. history. But the only people at the negotiating table are corporate lobbyists and government officials – not the groups fighting for workers, public health, free speech, environmental regulations and consumer protections.

“Democracy does not function unless the people have a spot at the table,” noted Wise. “The big corporations want to keep this as secret as possible.”

On the way to the rally, protesters stopped outside of U.S. Bank and Verizon – some of the many corporate “trade advisors” involved in the trade talks – to raise awareness about their support of the TPP.

“Secrets, secrets are no fun. TPP hurts everyone,” the protesters chanted.

Learn more about the TPP at the Citizens Trade Campaign website