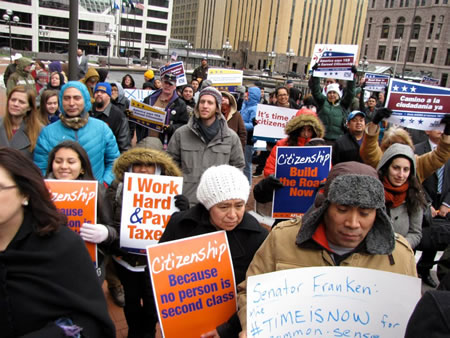 Hundreds gathered for the immigration reform rally at the Hennepin County Government Center in downtown Minneapolis. (Photos by Steve Share)

As part of a nationwide day of action April 10, a rally for commonsense immigration reform in Minneapolis featured speakers from labor, the faith community, business and immigrant workers’ groups. The crowd of several hundred people gathering at the Hennepin County Government Center plaza included many families with young children.

“There are rallies like this everywhere,” Javier Morillo-Alicea, president of SEIU Local 26, told the Minneapolis rally. “The crowd is estimated at 100,000 people in Washington, D.C.”

“Sisters and brothers, the time is now for commonsense immigration reform,” said Steve Hunter, secretary-treasurer of the Minnesota AFL-CIO, who noted that he, too, was the grandson of immigrants. “Empowering immigrant workers is a win for all working people,” he said. “By fixing our broken immigration system, immigrant workers will have a voice in the workplace…”

Father Kevin Kenny, representing the Archdiocese of St. Paul and Minneapolis, said, “we’re working as children, grandchildren, and great-grandchildren of immigrants to ensure the doors remain open” for people seeking a better life. 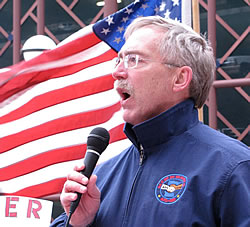 Right: Minnesota AFL-CIO Secretary-Treasurer Steve Hunter was among the labor and business leaders issuing the call for reform.

Speakers supporting the call for immigration reform included hotel owner and 2012 congressional candidate Jim Graves: “I come here as a businessman and as an employer of hundreds of wonderful immigrants… Let us always remember we are a country of immigrants.”

Mike Fernandez, corporate vice-president at Cargill, cited growing business support for comprehensive immigration reform. “For myself,” he added, “immigration is not just political, it’s intensely personal.” He told the story of his immigrant grandfather, who was a welder and member of the Sheet Metal Workers union. “People like my grandfather, all over this country, helped build it.”

Fernandez shared that he was the first member of his family to attend college — and that every week he received an envelope in the mail with $5 cash from his grandfather.

“The time is absolutely now for immigration reform,” said Javier Morillo-Alicea, president of SEIU Local 26. “The members of Local 26 have felt first-hand what we call our broken immigration system,” he said. In recent years, he reported, as many as 1,200 Local 26 members at one employer and 250 Local 26 members at another employer lost their jobs when their employers dismissed them after receiving warning letters from U.S. Immigration and Customs Enforcement. They lost their jobs, he said, “for the crime of working.” Employers, he added, are “making a profit out of exploiting workers who are scared.”

Speaker Gloria Castillo noted, “we don’t want any more employers to take advantage of their workers because they don’t have documented status.”

Issues related to reuniting families are a major concern for supporters of immigration reform.

Uriel Perez Espinoza, vice president for UNITE HERE Local 17, related a story about one Local 17 member who might need to wait 10-12 years for family members to join her in the United States. “We need to fix the system,” he said. “It’s not just for the undocumented. It’s for all immigrant workers.”

Minnesota Senators Al Franken and Amy Klobuchar both sit on the Senate Judicicary Committee, which will be playing a key role in the process.

Neither Senator attended the Minneapolis rally, but both sent representatives expressing support.

“Senator Franken knows our immigration system is broken and needs to be fixed,” Franken staffer Dan Solomon told the rally.

Klobuchar staffer Erick Garcia-Luna read aloud to the crowd from a letter by Klobuchar: “I believe there must be a reasonable path to citizenship.”

Nationally, the AFL-CIO has joined the call for immigration reform and “creating a road map to citizenship.” (See AFL-CIO statement: http://www.aflcio.org/About/Exec-Council/EC-Statements/The-Time-Is-Now-for-Immigration-Reform).

“Current U.S. immigration policy is a blueprint for employer manipulation and abuse, and both new American immigrants and American-born workers are suffering the consequences,” the AFL-CIO website stated.

Many of the signs displayed by people attending the Minneapolis rally bore the AFL-CIO logo.

A U.S. flag blew in the breeze behind the speakers at the rally. “We bring the flag to show the best of America,” said John Joslin, a University of Minnesota retiree. “My ancestors are immigrants.” He added: “The Tea Party and the hard right — they hijacked the flag.”