More people are leaving churches these days than are joining them. There has been a fair amount of media speculation on “the rise of the nones.” I’ve followed it all with some curiosity as a “none” myself. Little did I realize when the study was published in late 2012 that I would be trading in my non-affiliation for a church membership just one year later.

The first Sunday of 2013 I decided to try a new church. It was a bit of a whim. I was interested in exploring my options, and a new year seemed like the right time to test drive a new Sunday morning routine at the nearest Unitarian-Universalist society. It was nice. The sermon was about new beginnings, and it incorporated a guided meditation mini-session, which I thought was pretty cool. But it didn’t stick.

Six months into the year, whimsy struck again. I found myself sitting in the last pew back at that same Unitarian-Universalist church listening to a sermon about change–about life as a series of changes. After a moment of silence, the congregation stood to sing a haunting melody in four parts. The words “Who are we? Where are we going? Life is a mystery” seemed so light they could float. It was really quite beautiful, and I decided in that moment that I was going to be back the next week.

Since then I’ve hardly missed a Sunday. The sermons have addressed all sorts of topics from climate change and other social justice themes to various aspects of humanism. I always leave feeling inspired. ”No two Sundays are alike,” the minister says almost every Sunday. While that statement may stay the same, he’s right about the larger point. It’s always something new on Sunday mornings. This past week, for example, the children were invited to the front for a story, which was projected for the rest of us to enjoy as well. They read Duck! Rabbit! by Amy Krouse Rosenthal and talked about how we disagree with people when we see things differently. Do you see a duck? Or a rabbit? It could be either, and you don’t get an answer in the book any more than you do in a lot of real life situations. You only have your perspective–unless, of course, you can listen to the people around you and consider their perspectives. 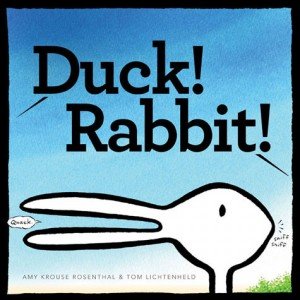 Have I really found a church that shares humanist values, embraces questions rather than answers, and uses picture books during the service as a learning opportunity for all ages? I’m in. I’m officially a Unitarian-Universalist.

Of course, regardless of my religious affiliation of lack thereof, the only thing I’ll be preaching about here is books. Duck! Rabbit! is a good one for sure. Highly recommended for families who are all about the life’s journey with all its mystery.

Find Duck! Rabbit! at your local library or buy it at an indie bookstore. Check out my For Secular Families page for more posts about children’s books supporting humanist values.