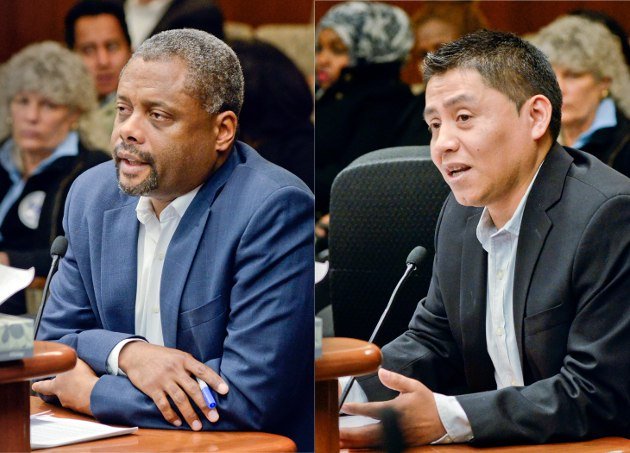 (Photo by Andrew VonBank) Left: Human Rights Commissioner Kevin Lindsey testifies before the House Housing Finance and Policy Committee Dec. 5 during an informational discussion about the issue of landlords refusing to renew housing leases for individuals who do not have legal immigration status. Right: Mario Espinoza testifies at the hearing.

With the Twin Cities metropolitan area rental market the tightest it’s been in years, some people who are undocumented are falling prey to extortion by unscrupulous landlords, who seek to take monetary advantage of a potential tenant’s illegal status.

Tenants who have found their immigration status used as a pawn to extract higher fees concerns Human Rights Commissioner Kevin Lindsey enough for him to suggest at an informational House committee meeting Friday that claims could be strong enough to bring legal action.

Mariano Espinoza, access and outreach specialist for the City of Minneapolis, told the House Housing Finance and Policy Committee that estimates show the state is home to about 91,000 people who are lacking legal documentation. About 67 percent of them live in rental units.

He cited examples, where people who cannot produce a Social Security number are told they can rent only if they pay a higher application fee. Others have had to pay maintenance fees for repairs that should be included as part of their rental agreement.

He said that many people without legal papers face discrimination, which is complicated because of the language barrier.

“This is a good opportunity for us to figure out how to help these people. The Latino community is not the only one affected by this,” he said.

Lindsey said it is not legal to require a Social Security number as a condition for rental and that individuals who are undocumented have the ability to bring housing discrimination claims.

“The stories that have been relayed would suggest there is enough to go forward with claims against these management practices,” he said.

While Social Security numbers can be used for legitimate reasons, such as to assist in a tenant background check, Lindsey said the testimony would suggest a claim against the state’s Human Rights Act is in order.

Rep. Karen Clark (DFL-Mpls), who chairs the committee, invited family members to also testify about being evicted or denied lease renewal because of their disabled children.

“These are serious issues, which are complicated by the lack of affordable housing,” she said.