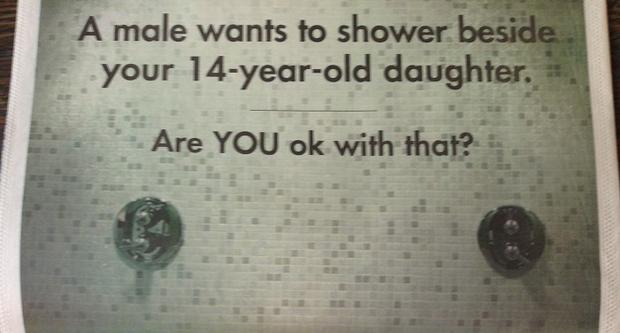 (Photo by Andy Birkey) The full-page ad, published in the Sept. 28 Star Tribune sports section, was from the Minnesota Child Protection League, targeting a proposed policy to allow transgender students to participate in high school athletics.

On Monday, the Human Rights Campaign and OutFront Minnesota criticized an ad bought by the anti-LGBT group Minnesota Child Protection League which was placed in the Star Tribune’s sports section on Sunday.

MNCPL, which opposes LGBT inclusion in public schools, placed the ad in order to foment opposition to a proposed policy before the Minnesota State High School League. The league is considering a policy that would allow transgender students to fully participate in high school athletics without barriers.

According to OutFront and HRC, the ad was transphobic and dangerous:

“The fear-mongering ad, which asks, “A male wants to shower beside your 14-year-old daughter. Are YOU ok with that?” is designed to play on dangerous, discriminatory and false beliefs,” HRC said in a statement. “Moreover, the ad fails to recognize the fact that transgender and gender-nonconforming youth are targeted for bullying, harassment, and violence at levels that are significantly higher than their non-transgender peers.

HRC continued, “Transgender youth, just like other youth, deserve full access to all of the opportunities school provides, including extracurricular activities like athletics. And the extension of this inclusive policy puts absolutely no child in harm’s way. In fact, it would do just the opposite. HRC condemns the Minnesota Child Protection League’s transphobia, and encourages the passage of policies that comply with Title IX and affirm and support transgender youth.”

OutFront Minnesota supports the Minnesota High School League’s effort to assure appropriate inclusion of transgender students in the sports programs. The League allows participation for all students regardless of their gender identity or expression.

The purpose of the League’s draft policy is to designate a set of criteria in which student athletes are able to compete on a level playing field in a safe, competitive and friendly environment, free of discrimination. Fundamental fairness, as well as most local, state and federal rules and regulations require schools to provide transgender students with equal opportunities to participate in athletics.

In the past few days, through a series of misleading emails and a derogatory, full-page newspaper ad, the Child Protection League and other opponents of LGBTQ equality have been hard at work trying to spread fear about the League’s draft policy pertaining to transgender student athletes. The opposition is maligning transgender youth and insisting they should not be able to participate in high-school related activities in their appropriate gender.

OutFront Minnesota has launched a petition for people who support inclusion for transgender students.