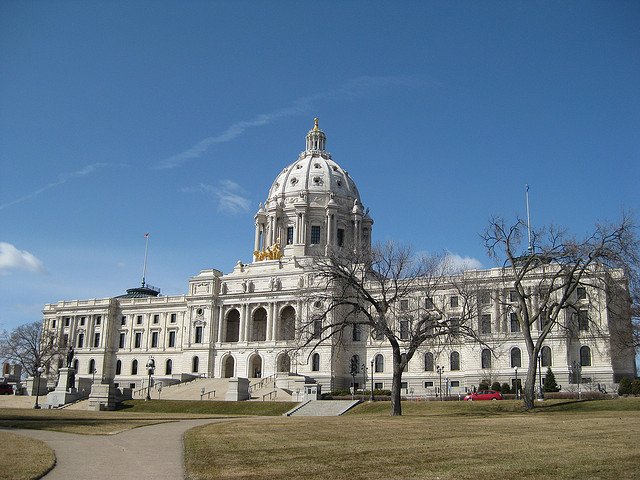 The Human Rights Campaign recently launched a new index rating the states on LGBT equality, and while Minnesota ranks well above many other states, the report notes some glaring inequities particularly on youth and transgender issues.

According to the State Equality Index, Minnesota is rated as “solidifying equality” along with neighboring Iowa. The report notes that:

“States in this category have marriage equality and nondiscrimination protections, though some lack explicit gender identity protections. They have relatively robust anti-bullying laws, but bad laws begin to crop up in this category.”

Liberal bastions such as Delaware, Illinois, Maine, Massachusetts, and New York are also in the category. But Minnesota is behind states rated as “innovating equality.” Those states are California, Colorado, Connecticut, New Jersey, Oregon, Vermont, and Washington, as well as the District of Columbia.

Minnesota’s deficiencies range from a lack of equitable health care for transgender Minnesotans to a lack of solid protections in parenting laws.

Minnesota’s does not have laws related to surrogacy for LGBT people. According to AllThingsSurrogacy.org: “It is unclear how Minnesota law treats surrogacy agreements because there are no statutory provisions or published cases dealing with the issue of surrogacy. However, there is an unpublished court opinion and anecdotal evidence suggesting the law would look favorably on surrogacy agreements involving lesbian, gay, bisexual or transgender (LGBT) individuals.”

On foster care issues, Minnesota lacks a law protecting LGBT people’s ability to be foster parents. However, the ACLU of Minnesota says that Minnesota’s Human Rights Act would prohibit discrimination. However, non-public services such as religious entities could reject an LGBT person or couple from fostering.

Minnesota does not have laws that prevent discrimination against LGBT youth in the adoption or foster care systems.

Minnesota also does not have laws that protect against discrimination in some forms of insurance coverage.

Youth Laws
While Minnesota has strong anti-bullying laws, the state missed opportunities on a range of youth issues.

The state does not have a law that prevents licensed professionals from engaging in “ex-gay” or conversion therapy with youth under age 18. That’s a law Can’t Convert Love MN is currently working to pass, though the bill failed to even get a hearing in 2014.

The report found that Minnesota did not have adequate laws to address LGBT youth homelessness including “requiring that service providers for homeless youth have non-discrimination policies in place and adequate cultural competency training, enhancing data collection to understand disparities among this vulnerable population, and ensuring that homeless transgender youth are able to receive appropriate services based on their gender identity and expression.”

The report also noted that Minnesota does not have policies to protect youth in the juvenile justice system that are LGBT.

The report also said that Minnesota did not have “Transgender Inclusion in Sports.” However, the Minnesota State High School League passed a transgender-inclusive policy in early December. It’s unclear if the report was put together before then.

Health and Safety
Minnesota’s MNSure program, the state exchange for health insurance, does not prohibit discrimination based on sexual orientation or gender identity. The report notes, “While the ACA and federal regulations make clear that healthcare and insurance providers must not discriminate, enforcement is administered by the states, and so it is important that state laws and policies establishing exchanges reflect federal non-discrimination mandates.” However, the MNSure website does cite the Minnesota Human Rights Act and instruction on how to file a complaint. https://www.mnsure.org/help/civil-rights/

In the 2013 session, lawmakers attempted to prohibit health insurance companies in the exchange from denying claims for transgender-related health care, but it was stripped out of the final bill.

Minnesota does not have a ban on exclusions for transgender health care which allows private health insurance deny important therapies and procedures.

According to the report, Minnesota also does not have a policy with a “minimum of difficulty” for people to change their gender on birth certificates. “Generally, this means that these laws or policies will create a clear process and not have specific surgery requirements in order to change one’s gender marker,” the report notes. However, in early 2014, the Minnesota Department of Health changed its policy on gender markers on birth certificates to only require a “appropriate clinical treatment” letter or “ACT” letter instead of a more onerous court process. It’s unclear if that was taken into account in HRC’s evaluation.

Minnesota also does not have a law relating to family medical leave that applies to same-sex couples when one parent doesn’t have a “legally recognized relationship to the child.”

Minnesota also does not provide “transgender state employees access to transgender and transition-related healthcare through their employment health benefits.”

Harmful Laws
In addition to the laws that Minnesota does not have, the state also has laws on the books that are harmful to LGBT people.

Minnesota currently has an HIV criminalization law that “criminalizes behaviors of HIV-positive people which carry a low or negligible risk of HIV transmission.” In at least one case, the Minnesota Supreme Court foundthat law enforcement misinterpreted Minnesota’s law, and called the law vague. The court punted the issue back to the Legislature which hasn’t moved to change the law.

HRC’s full report and state-by-state analysis can be viewed at HRC.org