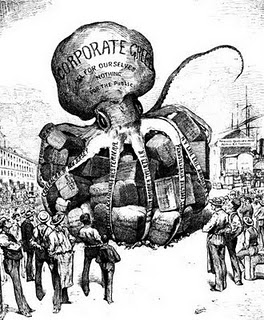 A reader suggested that Bluestem look into what the impact of the meltdown of MF Global might be on Minnesota’s rural economy. I haven’t come up with a definitive answer to this question, but perhaps the business press will look into it.

Here’s what I’ve found so far. Apparently the mega-brokerage not only made a losing bet on European bonds. Client funds are also still missing, the Wall Street Journal reports today. Hundreds of millions.

What does this have to do with farmers and grain elevators? Unfortunately, too much. MF Global not only traded in dubious European bond debt, but in the grain industry as well. MF Global Inc. is a now-suspended clearing member of the MGEX (the Minneapolis Grain Exchange). The MGEX  home page announces the suspension of the firm’s trading and clearing privileges, and the transfer of customer accounts to other firms.

MF Global is/was one of the world’s biggest brokers for commodities and listed derivatives, providing access to more than 70 exchanges globally as well as over-the-counter products . . .

Funds are transferred hither and yon among this myriad of firms as one finances another.

– These transfers appear to include use of clients’ funds rather than keeping them whole and segregated, which currently is legal — except that it appears upwards of $1 billion is unaccounted for. It is ironic that the Commodity Futures Trading Commission had proposed a rule under Dodd-Frank to not allow using customer funds for its own use, but it was shelved when several companies including Mf Global, requested additional comment time.

Lovely. Perhaps Mike Parry will dig deep within himsef and defend this lack of regulation. Moving on:

The list of the 50 largest nonsecured creditors doesn’t include commodity companies, grain elevators or other ag-related companies. But “there will be HUGE ripple effect as folks realize what this really means,” said one grain industry source who cleared trades through MF Global and has spent the week shifting accounts to one of the other clearing firms (ABN, Amro Chicago Clearing, ADM Investor Services, Dorman Trading, FC Stone, R.J. O’Brien, Rosenthal Collins Group) and handling the paperwork.

According to Reuters, 50,000 customers have had to move accounts — and only 60% of the account funds will move with them, so these firms and individuals will have to come up with the balance to keep their margin funds current. Those who can’t may be forced to liquidate their positions.

That’s right: a 40% immediate loss. While big firms like one privately-held commodity behemoth my source mentioned is rumored to have used MF Global extensively have plenty of cash reserves, individual farmers and small town cooperative elevators working a hedge are not so lucky.

There’s nothing publishedthat I can find about Minnesota firms or farmers, but we know MF Global had a seat on the grain exchange, so it’s likely some folks in the state are caught up in the aftershocks of this market-rattling event. The Wall Street Journal provides a timeline of the firm’s evolution here.

Some scattered sources do suggest that there might be trouble. Reuters reports from our southern neighbors in Iowa farmers feel ripples of MF Global bankruptcy:

MF Global Holdings Ltd’s bankruptcy has sent shockwaves through a little Iowa town, where a local broker said he felt a moral obligation to guarantee more than $1 million in funds he placed for farmers at the futures brokerage.

Ken Ries, the 62-year-old owner of Ries Ag Marketing, has been clearing through MF Global and Refco since opening his commodity brokerage and grain dealer in 1987.

In an interview from his home in the farmland outside of Ryan, Iowa, Ries said he might wind up covering client funds — all from farmers in eastern Iowa — that have not yet been accounted for. MF Global and its regulators are searching for some $600 million worth of funds that went missing in the chaos of its bankruptcy this week. . .

Reis said calls to MF Global offices have mostly been met by busy signals. When he reached representatives on the phone, they were unable to provide him with any concrete information on when his clients’ money would be available.

The bankrupt brokerage, however, transferred 58 percent of his clients’ accounts to a new clearing firm, ADM Investor Services, on Friday. Ries is hoping accounts that have cash but no open trades will be transferred over the weekend. . . .

And there’s more here at AgWeb’s Latest News on the MF Global Bankruptcy Filing. Two podcasts predict a rough row to hoe. Jerry Meyer says MF Global Funds Release, Don’t Expect It to be Easy. And Jerry Gulke explains What Happens Now as MF Global Funds Transfer. It’s not pretty and Gulke warns that if there are any surprises in Wednesday’s release of the World Agricultural Supply and Demand Estimate by the USDA, the grain markets and farmers could be in for a rough ride.

Perhaps more solid news on this development in Minnesota rural economy–prompted by wheeilng and dealing far from the windswept praire and sunny small towns–will emerge in the state’s media. Bluestem will keep it’s reading glasses on and report back as news develops.

Update: After checking out this post, a reader involved in agriculture called to share this “Hog Blog” video in which AgStar’s Steve Malakowsky discusses MF Global’s bankruptcy filing [Youtube here]. One can infer that swine producers used MF Global and Malakowsky, Agstar’s Vice President of Agri-Business Capital,lays out the process for swine producers to move to other brokers. [end update]

Graphic: From 1882, the Octopus as a symbol of corporate greed.