In the US, when a bank fails the FDIC swoops in to take control. Often arriving on a Friday, a bank that cannot meet its obligations is often completely re-organized and recapitalized over the weekend and opens for business on Monday as if nothing happened. The executives are pushed out to the street and new management is found, often another bank that can take over as soon as possible. They’ve done this 30 times so far this year. It’s all paid for by insurance premiums paid over categories of risk at all banks across the US.

In Europe, they don’t have such a mechanism. They have something called “Emergency Liquidity Assisitance” (ELA) which is run through the central banks of the member nations. No one knows which banks are getting this money, and the executives to run them as usual. The exact amount has been buried in the balance sheets of the European Central Bank (ECB) as “other claims”, so we don’t even know how much it is. But as money flees Greece and some other nations there’s a whole lot more “other” floating through Europe. And the secrecy shows just what’s wrong with a banking system set up by and for bankers.

It’s best to start with the size of the problem, as shown by the total lending pushed through the ECB as “other claims” over time: 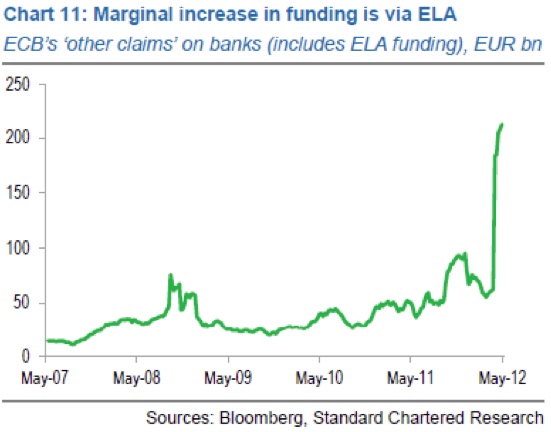 The recent spike seems to be in the €170B range, or not quite double the much trumpeted emergency loan to Spanish banks in plain sight. We can assume that a lot of this money is going to Greek banks, which have been losing money to a quiet run on the order of €600M every day, which everyone hopes will quiet down now that the election is over. In order to come up with this money the banks have to either sell off their assets in a big hurry or come up with additional cash. That’s where the ECB steps in and provides ELA.

Secrecy is built into the system so that the panic that ensues when there is a genuine run on a bank does not become public. But this thinking is completely wrong when you realize that there are no “secrets” in European finance – everyone has learned how to sift through the bureaucratese and nonsense and discover what is really going on. This process turns banks into something like a ponzi scam, where the only ones who can be sure they will be paid are the first ones out – accelerating the stampede.

You can bet that ordinary Greeks, a people who are great at processing rumors as a source of news, all understand what is going on.

This is important to us in the US because it shows not only that the crisis in Europe is deeper than we thought, but precisely why it cannot be solved by Europe. They simply do not have the mechanisms in place to prevent this crisis from becoming much worse. They have not even thought their way through the worst case scenario well enough to even contemplate the institutions, like a Euro FDIC, that are necessary to support their system. Plus, they have no way of getting rid of people in high positions that have messed up.

Our own system is far from perfect, but this highlights where we do things well and why our own lessons can be more universally applied. Financial institutions of all kinds could well benefit from something like the FDIC if the government is indeed going to be stuck being the lender of last resort. The pool of money built up by insurance premiums ensures that bailout does not cost the taxpayers anything, and an unlimited line of credit at the Federal Reserve could be used to take on even the biggest and baddest of the “Too Big to Fail”.

Why is there no Euro FDIC? Because they thought it was best to keep it all under the table and hushed. They are completely wrong because everyone knows what is going on all the same, so the only thing the ECB is accomplishes with its current policies is job protection for bank executives. That’s precisely the wrong thing to do, and that should be obvious to everyone.

But it also highlights where we make the same mistakes. The FDIC is a critical institution for US Banking, and everyone can learn a lot from how efficient it is.