Workers from All Energy Solar in Uptown installed panels on Columbia Place’s garage roof. The building’s owner, Doug Jones, should save about $500 per month  though the installation cost $200,000 minus rebates. (Photos by Gail Olson)

Overall, Minneapolis has more sunny days than Houston, Texas, according to Michael Allen, who owns All Energy Solar. “People don’t believe me when I tell them that, but it’s true. What you need for solar is sun hours. Solar works here.”

Allen’s employees were busy last week putting the last of 162 solar electric panels on Columbia Place’s garage roof. (Many Columbia Heights residents will remember the building at 5100 6th St. NE as the former site of Nelson Elementary School, built in 1954. After the Columbia Heights school board closed it in 1981 and sold it, the new owner converted it to condominiums.)

Allen said he estimates that the panels, which convert sunlight to electricity, will cut current building owner Doug Jones’s electricity costs by about $500 a month.

“That is what he’s paying now,” Allen said. “This will eliminate his bill.”

Allen said that today’s solar electric panels are greatly improved. “These are not the huge clunky solar hot water panels from the 1970s and 1980s. There were a lot of problems with those systems, and people got a bad image about the look of solar. The look has changed. These are cost efficient. It’s no longer just for people who want to be green. It makes sense for everyone. We do a lot of work with architects. We can custom design systems. There are solar shingles. There are systems that can be integrated into the roof.”

Columbia Place building manager Bryan Jones said the panels will provide electricity for the building’s common areas such as the laundry room, two garages, hallways, party room and exercise room. The installation, which cost $200,000, is commercial, he added; individual residents won’t realize the savings because there is no direct wiring to their units. The initial cost was mitigated somewhat by an Xcel Energy rebate and an energy tax credit. And after that, Jones added, “The savings depend on the amount of sunny days.” 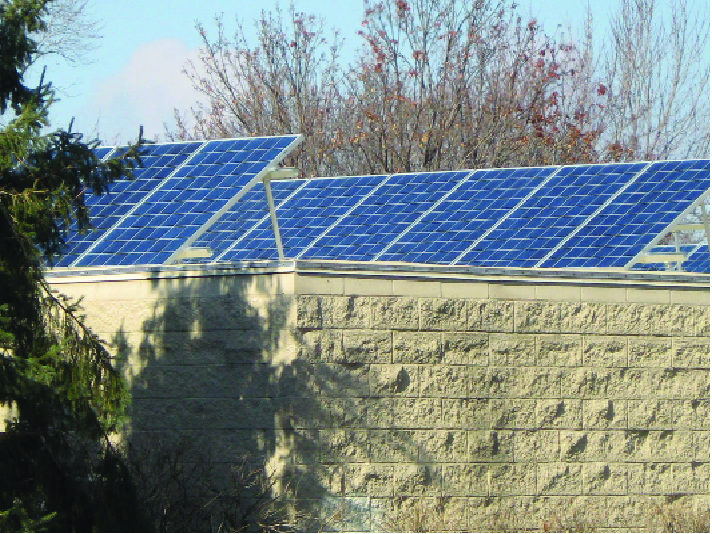 Northeast homeowner Tom Krohg, who describes himself as “a solar panel enthusiast,” had six panels installed on his roof in September, 2011. He and his wife bought their house in 2000 and agreed on an energy-efficiency priority for their home improvements, he said. “We re-insulated the attic, bought energy efficient appliances, replaced the lights with fluorescent bulbs and put in a 1.5 kilowatt solar panel system. It covers half of our electricity needs.” He added that they had to change some of their habits after they installed the panels. For instance, they used to run their washer and dryer at night in off-peak times, but now need to operate them during daylight hours.

The project cost $9,000. They got a $3,375 rebate from Xcel Energy and also get energy saving tax credits, which brought his out-of-pocket costs down to about $3,000. “You have to jump through some hoops for that, and the money is getting tight for these projects,” Krohg said. “You submit a plan, they have to approve it and get the ball rolling. A certified state inspector checks it out. I have a 20-year contract with them [Xcel]. If I produce more energy than I can use in a month they have to buy it from me, although my system will never do that unless I’m not home for a few months.”

He said that he would probably need between 12 and 14 panels to run his entire three bedroom ranch house, which has a finished basement. “I don’t use my panels for heat, although they power the furnace fan. I didn’t do this to make a ton of dough, I just wanted to prove that even a small system makes a huge impact. I have a couple of neighbors who have been watching this project and I say, ‘Let’s compare our bills.’ When we do, they say, ‘You don’t use any electricity!’”

Krohg said that the cost of solar panels (his have 25-year warranties), is dropping. “One challenge I have is that when it snows, it’s dicey to get up on my roof and brush off the panels. My installer said it would slide right off, but that’s not what happens. It slowly melts. That’s a problem that needs to be addressed. Some people put a tarp up there to cover the panels when they know a storm is coming. I would have done a ground mount system, but then you expose it to vandalism and copper thieves.

“I’m not that ‘green,’ but when it comes to electricity usage and energy savings, I’m there,” Krohg said. “I’d like to see two or three panels on every home in Minneapolis. We should make it part of the building code, part of the tax code. This is cheaper than building a power plant. We can reduce our dependency on power in this country by putting up something that’s carbon neutral. If everybody reduces the energy they pull from the city by a half, wouldn’t that help? Wouldn’t that prevent brown-outs?”

East Side Food Coop, 2551 Central Ave. NE, installed a 20-kilowatt hour (kWh) passive solar system on the roof in October, 2010, and the meter was turned on Dec. 8, 2010. General manager Amy Fields said that three programs made the project affordable: Xcel’s Made in Minnesota program (10K Solar made the co-op’s panels and Sundial Solar installed them; both are Minnesota companies); Xcel’s installation rebate; and a $50,000 U.S. Treasury grant.

“We had hoped for 24,000 kWh a year. As of December 8 (2011) we’ve done about 17,000 kWh, which is 3,000 fewer than we had hoped to generate in our first year. We’re about 85 percent of capacity. What I’ve wanted to do is find out if we had a cloudier than normal June and July. We had torrential rains in June and July, and then the drought started in August; those three months were going to be our powerhouse months,” Fields said.

“Am I pleased?” she asked. “Sure. It generates four percent of our electricity, which doesn’t sound like a lot, but we are very electric-intensive. Our refrigeration system runs 24/7 and we’re open 13 hours a day. We have huge electrical needs. The value of this project was $167,000. Because Sundial offered us their own individual grant and co-op members helped with the installation, our out of pocket expenses were $16,000.”

Fields noted that there is another, unexpected advantage to solar power: “It’s fun to monitor the savings. I try to check it at least every day. When it snows, I’ve found that the first day after the snowfall it doesn’t register any power because the panels are busy melting the snow. After that, it registers.”