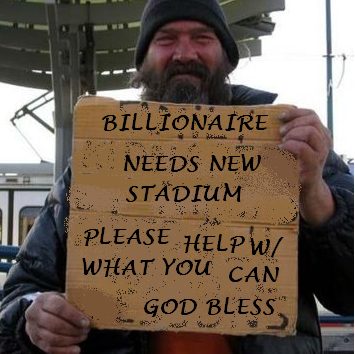 I’m still having a hard time fathoming how we can give a massive gift to billionaire Vikings owner Zygi Wilf when we can’t adequately fund education and the Republicans cannot produce a balanced budget.  I’m fairly certain that under anybody’s budget, the elderly, poor and the mentally ill will suffer.  Under Republican plans vets suffer, too.

Yet, leaders on both sides are trying to figure out a way to build a new stadium for Zygi Wilf.

Here’s a thought:  do like The Pack.  The Packers are expanding Lambeau Field and paying for it themselves.

This is not a dilemma.

Figure out a budget first.  If you spare the poor, elderly, mentally ill, kids and vets THEN talk about a stadium.

It’s fairly obvious that with the Republicans controlling the legislature, we are not capable of walking and chewing gum at the same time.