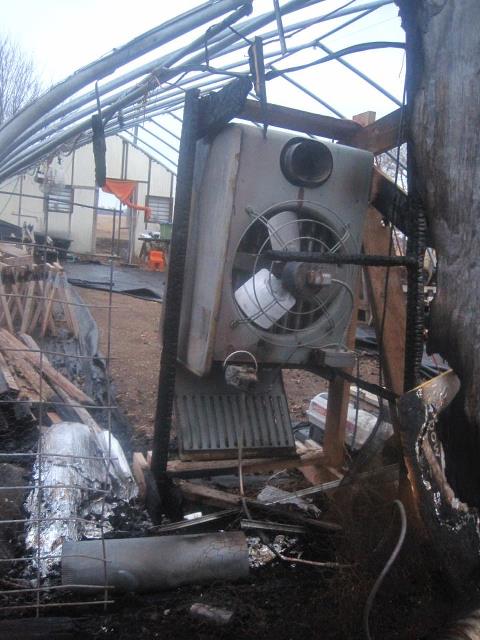 The West Central Tribune and the Montevideo American News both carry news of the fire at the Easy Bean Farm in rural Milan, Minnesota. Easy Bean is a 120-acre organic CSA farm that’s also home to artist Malena Handeen.

In Family grateful things were not a lot worse in Milan, Minn., farm blaze, the West Central Tribune reports:

Cleanup is underway at Easy Bean farm east of Milan, where a fast-moving grass fire Monday destroyed an art studio and its contents, a granary holding farming equipment, a pickup truck and tractor, and damaged two greenhouses and other equipment.

The fire also destroyed a vacant house, two sheds and numerous older-model vehicles, tanks and other items on an adjoining property.

The actions of rural mail carrier Paul Belseth, Milan’s former fire chief, are credited with saving the home of Malena Handeen and Mike Jacobs, and their children, Hazel and Arlo.

In an email sent out earlier this week, CURE’s Patrick Moore described the farm as “one of our region’s shining examples of how creative, hard working people are pooling resources to grow good food and create compelling art & music.” Anyone taking a tour of Easy Bean Farm’s website–or the farm itself–can gain an appreciation of that example.

People who want to help the Mike Jacobs and Handeen household have a couple of avenues by which they may extend a hand to the family.

An account has been established at the Co-op Credit Union, 2407 Highway 7 East, PO Box 447, Montevideo, 56265, to help the couple with their financial losses. Photos from the fire are posted on the Easy Bean farm’s Facebook page.

Another way to help (and secure some mighty healthful and tasty vegetables) is to buy a subscription to the CSA. A full share will bring a 1 1/9 of a bushel of produce for arounf 17 weeks; smaller shares are available.

Live in the Cities? No problem: Easy Bean drops off shares at locations across the metro for $1 extra per box, as well as delivery spots in west central Minnesota.

Oil paintings by Malena Handeen of rural Milan are currently being exhibited at the Prairie Renaissance Cultural Alliance until the end of March, 2012. . . .

Malena has been painting for over thirty years. Her work captures both inner, personal landscapes and the beauty of the countryside that surrounds us. Malena is also a musician who writes music, sings, and plays accordion. CD’s of some of her songs are also for sale at the PRCA gallery.

Malena is the owner (and janitor) at her home studio, The Loose Tooth Cowgirl Saloon of Art . . .

Finally, there’s a hands-on clean-up day this weekend. Bring your own shovel, since those at the farm were destroyed by the blaze. Audrey Arner’s Facebook page has the deets:

Jacobs and Handeen practice “Tikkun Olam or “the mending of the world” in their farming and art; now is the time to return the favor for this wonderful family and business. Their edges are more than a little frayed right now, and you can assist with the mending.