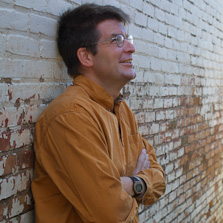 How Helicopters Figure in My Dreams by Three Crazy Sons

So here’s a show that I went into pretty much completely blank. The sum total of what I knew was that

1) it had an intriguing (if vague) title,
2) the show image was a football jersey, and
3) the performer seemed like a really nice guy when we were handing out cards.

I show up at 7:03, meaning that I miss the very beginning of the show. I walk in as he’s running over, in detail, a play-by-play of a series of football games that he’s witnessed.

Oh, man…definitely don’t have anything *against* sports, but don’t know anything like enough about them to be able to follow this.

See, didn’t turn out to be a problem, though. Most of what he’s saying doesn’t revolve around reciting scores, but about the emotional impact of certain moments on him. I may not understand the significance of an individual pass, but I recognize that it has significance for him. Intent informs content; the details escape me, but I can follow the broad motions.

This explains why I found his performance of these sections tolerable. It doesn’t explain why I found them riveting.

Part of that, certainly, is his impassioned delivery: his face lights up, his body and voice become incredibly animated – he’s clearly talking about a subject which has great significance for him. And, ultimately, I find myself responding to what he’s saying, because he’s not really talking about football. He’s talking about *obsession*. And, as someone who has engaged in heated, hour-long arguments about which superhero would emerge victorious under what circumstances, obsession is something I can identify with.

These passages are largely defined by the context in which he describes them taking place: at football practice, watching games with his father, watching games *as* a father. Fatherhood is, in fact, the other major subject here, as he discusses his parent’s gradual fading to both cancer and alcoholism.

(The subject is, very clearly, one of intense emotional importance to him; which is why it seems, perhaps, a strange complaint to state that in points of this section of the story, his writing and delivery felt – too raw? Overwrought? His recollections seemed to have greater weight to me when they were understated – observing that his emotional state was terrible, without needing to, necessarily, demonstrate to us that it was.)

(Okay, so, going further – this is a show that strikes me as being born more from a spirit of reflection than of inquiry. This isn’t about trying to create some great grand observation, or to wrest some meaning from his unfortunate circumstances – it’s simply looking back upon those circumstances, arranging them within a narrative, and letting the events occur without trying to impose some sort of meaning upon them. Which, as a writer, I find sort of admirable.)

The threads interweave amiably, intersecting at appropriate emotional points and being, in moments, masterful. Ultimately, what drives this for me is his own stage presence: he’s as charming and likeable onstage as he is off, and in the moments of discussing his love of pro football he’s genuinely vulnerable with us.