Although I’ve been an active caucus-goer for about as long as I can remember, it was only last year that I decided to take the plunge and get involved in a sub-committee. I picked the resolutions committee, because I was working on a resolution against Northern Metals at the time. I gained a deeper respect for the grinding work it takes to slog through such political minutiae, and decided that I’d put in my time for the next decade or so. 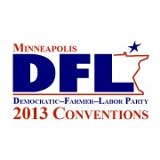 I did kick around the idea of getting on the arrangements committee, if for no other reason than the last senate district convention’s layout straddled the line between “inconceivably awful” and “potential fire hazard death trap” more successfully than anyone could have expected. And I didn’t want a repeat of that fiasco.

But then a funny thing happened on caucus night. There was no chance to sign up for participation on a committee. At least in my precinct, that just wasn’t an option for anyone. I’ve asked representatives from different campaigns about this, and it appears there is a completely different method for selecting committee membership – either for this year or for city elections vs. state elections.

At last year’s caucus pretty much anyone who wanted to be on a committee just raised their hand and signed up. This year, it seems that committee membership was selected through two different mechanisms. First, some people signed on months ago, through a process that wasn’t exactly clear or widely announced. Second, each campaign was able to pick a few of their people for at least some of the committees. That, however, happened only after complaints were lodged.

Per the esteemed city party chair Dan McConnell, in off/odd years, the DFL constitution does not specify how such committees are formed, or even which ones are created. So the discretion is presumably up to the ward chairs and whoever is a part of their inner circle.

Now, there are some aspects to like about the second system–or at least the one used after one or more campaigns complained. For one thing, it keeps a campaign from stacking committees with their members in an attempt to skew results. (A credentials committee stacked with one candidate’s supporters, for instance, could selectively challenge delegates, and ultimately harm the credibility of the endorsement process.) And with a relatively short turnaround time between caucus and convention, at least some preliminary work is needed before committees can form after caucus night.

But what I don’t like about how things were handled for committees this time around is that the process is different. Precinct caucuses are tricky enough to navigate. And grunt work on committees is how many people build their relationships within the party so that they can move up in rank or eventually run for office themselves. In order to increase participation and develop new leadership, the way one accesses power structures within the party should be as uniform as possible.

Furthermore, and more importantly, at least when a campaign puts together a good ground game to fill committees, that process is open and transparent. I would also much prefer to reward someone for what amounts to good organizing, as opposed to rewarding someone for knowing and liking the right people, or holding the “right” viewpoints.

Back to uniformity for a moment: while there is something to be said for local control over such decisions, the DFL is a statewide brand. As a parallel, think about the Cracker Barrel restaurant chain. You know that just off of Midwestern suburban freeway exits, you can pull into one of these restaurants, wait half an hour for a table for some reason, undo a bunch of old-fashioned puzzles that the staff probably spends an evening shift putting back together, order an overpriced hamburger, and waddle out of there on your way to a Holiday Inn. Sure, it’s not that great, but people like it because they know what to expect.

I would argue that the party benefits from more participation (assuming that’s what they really want) when there is a uniformly understood mechanism for how one accesses power, influences decisions, and even climbs the ranks. When that process is different from year to year, or city to city, or even precinct to precinct, it serves only to disenfranchise people or make them less willing to participate in such political minutiae.

Even if committee make-up is decided in well ahead of precinct caucus night, that process ought to be more open and accessible. The local DFL branch can and should do a better job of promoting committee openings and recruiting new participants. If there is no committee membership option on caucus night, people should at least be given a pathway to join up. “This year’s committees are full, but if you want to sign up for 2014, we’ll be putting together those committee rosters by the end of the year. What’s the best way to contact you at that point?”

This year it’s too late to get things right, but there’s always the next election.