Upticks in various government measures and financial indices show that the U.S. economy continues to roll along in a recovery mode. But by one local measure it is still too early to say, “Recovered. Job done. Mission accomplished.”

Most often, where economic measurements come home to roost for Minnesotans is with home values. In turn, those values are greatly influenced by household income that makes home ownership possible.

February is not a big month usually for the housing market. A statistical mean average price for all months in 2012, for instance, was $167,900. The inventory of single-family homes on the Twin Cities market is tight, and as the Minnesota Housing Partnership reminds us, rental properties for families are in extremely tight supply.

“Judging by the number of inquiries agents are receiving, buyers seem prepared and motivated this spring,” said Emily Green, the realtors’ president-elect in announcing monthly data. “We anticipate an uptick in new listings and we hope it is enough to meet the strength of buyer demand.” 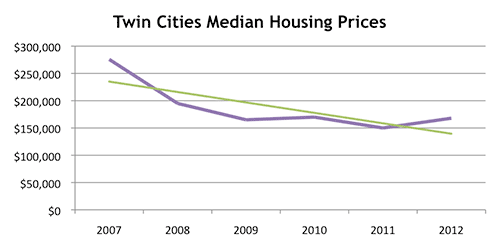 If one looks at the trend line inserted in the above graph, we have started to cross the downward tend line set by the peak median home prices of 2006-2007 before the housing bubble burst. As retired St. Paul banker Larry Buegler and I noted in a March 2009 report, “Stopping the Freefall: Stabilizing Minnesota’s Housing Market,” regaining mid-point home values would indicate a statistical “reversion to mean” and would indicate the housing market has recovered. We’re gettng closer to recovered territory.

A drag on such a recovery, however, comes from the inequality factored into the American economic recovery. The U.S. Census Bureau found Minnesota household income fell to a mean average of $56,954 in 2011, down nearly half a percent from 2010 and down 4.83 percent since 2008. Data for2012 will be released by the Census Bureau in September this year.

The following graphic, however, helps show why the recovery in the Minnesota housing market is slow despite overwhelming signs of economic growth on other measures of the economy. 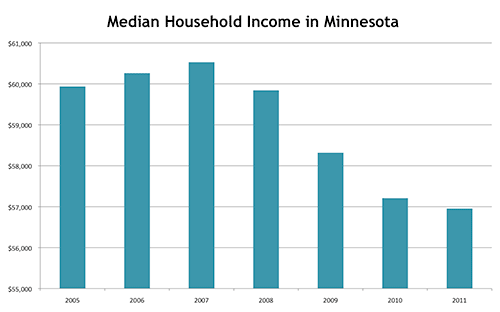 Continuous shrinking household incomes do not encourage people to buy homes or make other big-ticket purchases.