When searching for housing, the immediate impulse is to assess the price tag, period. Can I afford the mortgage/rent? But new research shows that housing affordability framed as such doesn’t tell the whole story. 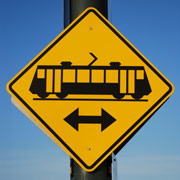 It’s become increasingly important to factor the transportation costs of a neighborhood into cost analyses because even if a housing unit itself is cheap, any perceived savings may be lost in the spending associated with driving a car to commute, well, everywhere.

That’s why it’s important to pay attention not just to the marked price tag but also to “smart” locations, like those well served by public transit, dense rather than sprawling, and within walking distance of retail and professional businesses.

These factors aren’t simply desirable for those in pursuit of a cosmopolitan millennial lifestyle. Certainly walkable, mixed-use downtown models have risen to prominence of late in urban development, but the merits are fortified with numbers.

Again—only two out of five neighborhoods are truly affordable when accounting for transportation costs.

New urban development as well as pre-existing neighborhoods following the walkable, mixed-use model can work in large part because they cut down significantly on transportation costs. So although up-front price tags may be higher, it’s critical to account for the savings in transit.

It makes sense that transportation hasn’t always been presented as a major factor in affordability because expenses are disaggregated (car payments, gas, insurance) rather than housing, which comes with an easy-to-measure sticker price.

But in a world where fossil fuel dependency is an issue of heightened importance and economic inequality impels us to support sustainable urban development especially in the low-income ranges, it’s time to turn away from sprawl and deceptively expensive suburban housing.