Republicans in the US House are continuing to push their assault on poor women and children.

House Republicans are pushing forward with their “shared sacrifice” agenda. Today, they’re asking newborns and low-income women to pitch in: The House is expected to vote on a proposal to cut the Women, Infants and Children program, which helps about 9 million mothers and their young children, by 13 percent. The Center for Budget and Policy Priorities estimates that up to 350,000 food-assistance recipients would be cut off if the measure passes. At the same time, the House is also debating a bill to increase the Pentagon’s budget by $17 billion — even though Defense already makes up more than 50 percent of discretionary federal spending. Hey, maybe they’ll make their sacrifice next year.

Note the comments in the right-hand column, on the linked page.

How do they deal with the dissonance, of voting to cut aid to society’s most vulnerable, while still proclaiming themselves wonderful “Christians?”  By convincing themselves that their activities will actually help the poor, in the end, because all government is evil.  There’s absolutely zero evidence for that, quite the opposite, but these idiots only traffic in cowardly, self-serving lies, not reality.

Obviously, this bill is unlikely to get through the Senate, as is.  But it’s unclear, to what extent programs like WIC are in play, in the big-time “deficit negotiations” that are taking place now, largely between extremist Republicans and Conservadems.

Here’s where WIC money goes.  Far from the bloated paragon of inefficiency that righties like to claim government programs are. 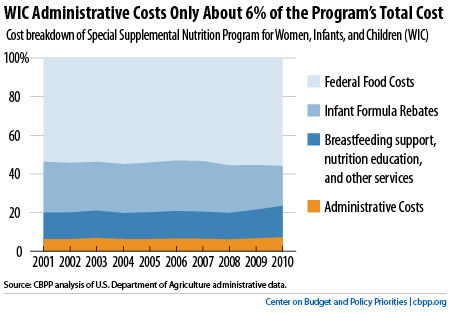