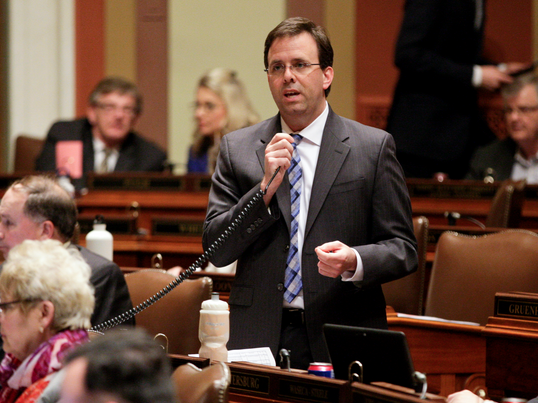 Rep. Pat Garofalo speaks during early debate on his bill, HF1027, which would modify the minimum wage for certain workers who receive tips. Photo by Paul Battaglia

Some waiters and other tipped workers could earn a wage lower than the state minimum, under a bill the House passed 78-55 late Monday.

HF1027, sponsored by Rep. Pat Garofalo (R-Farmington), would set a minimum wage of $8 an hour for workers whose combined tips and wages come to $12 an hour or more during a one-week pay period.

Lowering the wage would preserve waiter jobs at restaurants offering full table service, Garofalo said. “Right now, businesses that are doing table dining, we are providing a regulatory incentive for them to move to fast-casual.”

The proposed lower-tier wage is a dollar less than the new $9 an hour minimum that goes into effect Aug. 1, 2015, as part of a law enacted last year stipulating a series of wage increases. Employees whose tips amount to less than $4 an hour during a work week would make the higher minimum wage. The bill would repeal a part of current statute that prohibits the counting of employee tips toward the minimum wage.

The bill now goes to the Senate, where Sen. Gary Dahms (R-Redwood Falls) is the sponsor.

“Freezing wages for waiters and waitresses will not make our economy stronger,” said Rep. Ryan Winkler (DFL-Golden Valley), calling the bill “a penalty on people who earn tips for their hard work.”

Rep. Abigail Whelan (R-Anoka), citing her own experience as a barista as well as the service-industry work experience of her mother and sister, said the bill would help struggling restaurants and “keep as many people employed as possible.” After misguided minimum-wage increases, Rep. Glenn Gruenhagen (R-Glencoe) said HF1027 is “a step back in the right direction.”

The House adopted Garofalo’s delete-all amendment 77-56. Among other changes, the amendment would add a ban on restaurants deducting credit-card company fees from tipped workers’ wages — as proposed in HF402, sponsored by Rep. Jim Davnie (DFL-Mpls).

Despite that, Davnie urged a “no” vote on a bill he compared to “standing on someone’s paycheck and jumping up and down and trying to make it smaller.”

From among the dozen amendments that were offered, Garofalo said he could accept two: