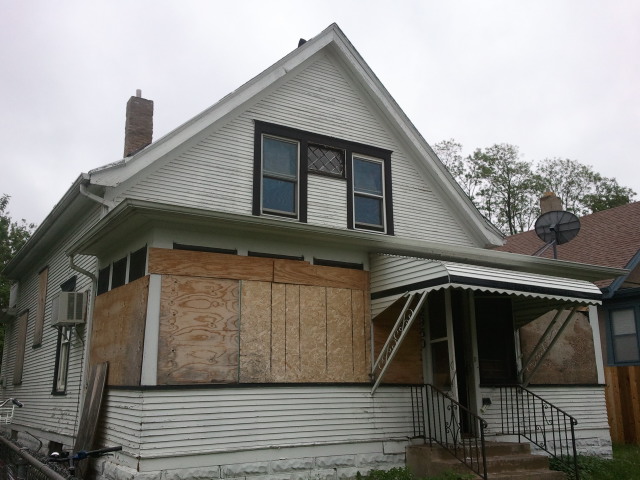 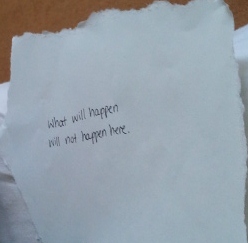 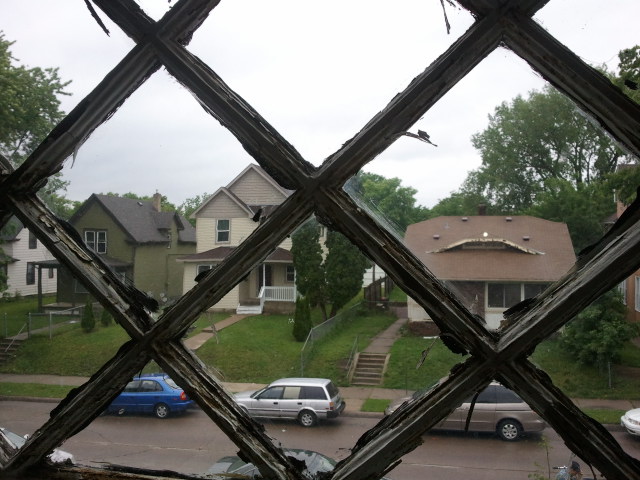 Over the past month, a group of artists have been working at their craft at 2930 Newton Avenue North. The house is owned by the city of Minneapolis, and according to the artists, is slated to be demolished. The imagery here is centered around the temporal nature of this house as it heads towards its demise. I had the opportunity to visit the home both during the opening and closing sessions. What I found here invoked a sense of loss, a remembrance of the past, and frankly a seething level of frustration that a home perfectly able to be restored could somehow be torn down.

Others may be more detached; I cannot separate the fate of this house from the art created within. I think that was kind of their point, driven home immediately when one walks in the door and sees… 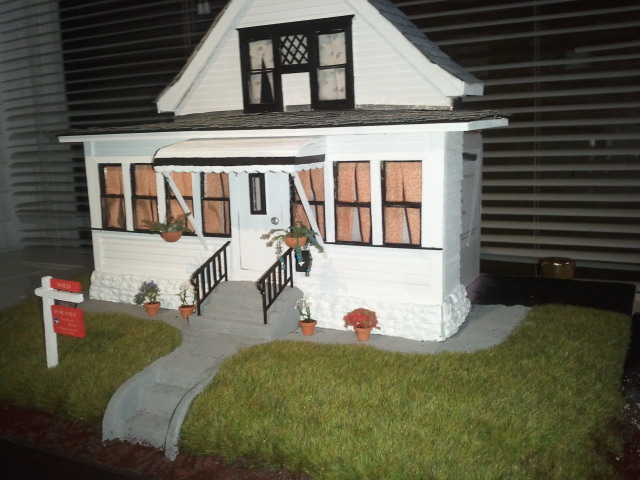 …a miniature recreation of what this home could look like if it were rehabbed instead of torn down. The photographer, Japheth A. Storlie, will then take a picture of the miniature in front of the condemned home before its demolition.

Before I could get past the entryway, I had to sign a waiver that I understood I was entering a condemned home and that I wasn’t going to sue anyone for bad things that could happen within. I asked if anyone knew the mystery of why the house was coming down instead of being repaired. The best guess I got was that there was significant mold problems in the basement (so bad that they had–gasp!–a SIGN telling people not to go downstairs). That didn’t fly in my mind. I can imagine homes being so ridden with mold that they are beyond salvation. But it would seem to me that such properties would be either structurally unsound or unsafe to enter without some sort of respiratory protection. The case of the curious condemnation continues.

In the living room area, lines are penciled along the walls. I was unable to match up an artist on the Tumblr page with this room, but I followed the lines until I saw… 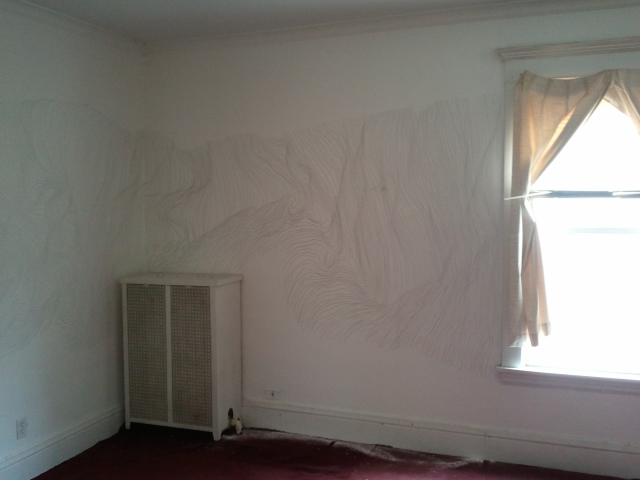 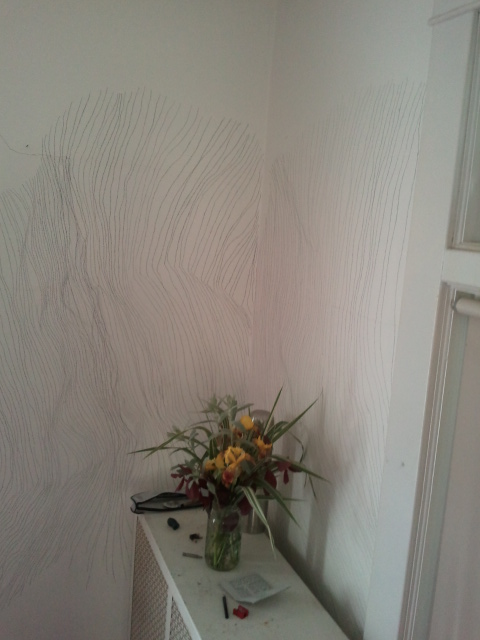 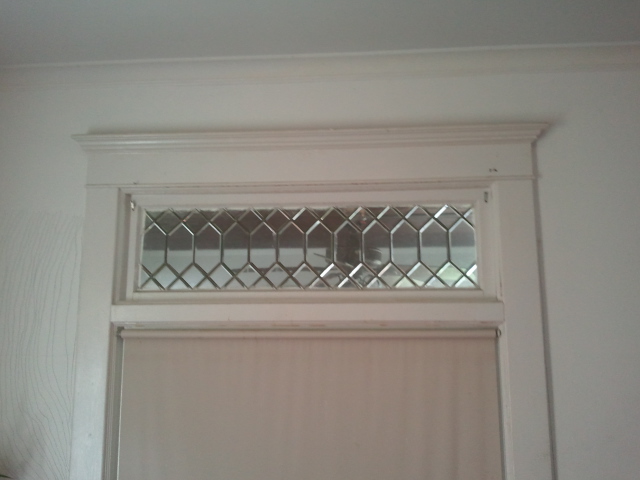 Yet another stupefying piece of evidence that would suggest demolition is unwarranted here. Moving on to the dining room… 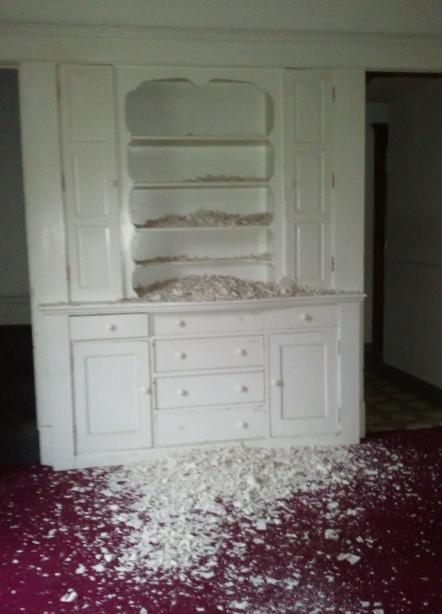 Well this looks like enough lead paint chips to fill a kiddie pool. (Oh yeah, this exhibit is not a fun place for toddlers to play) But when they cleaned up the built-in, it looks like this: 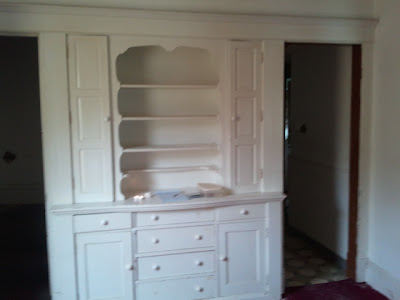 With the paint chips now even more accessible for the young-uns, but more leaded glass here. 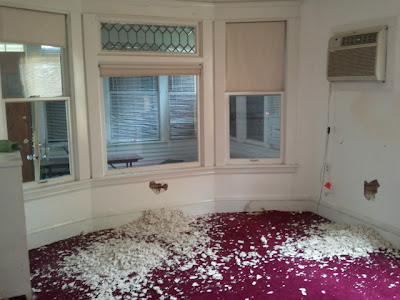 For the record, I have no clue if these were paint chips or if they contained lead. The above language is hyperbole.

In the kitchen, assorted findings from the house were inventoried. 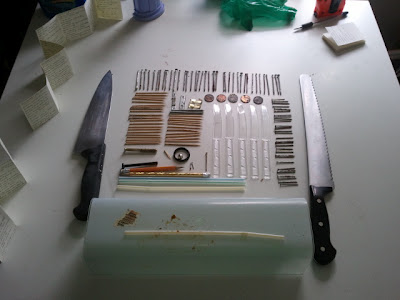 The final room downstairs was filled with life-size depictions of what people who once called this home might have done, called “We Used to Live Here.” 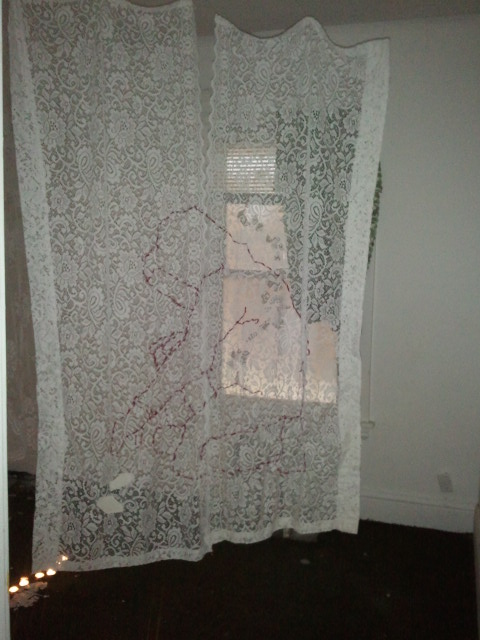 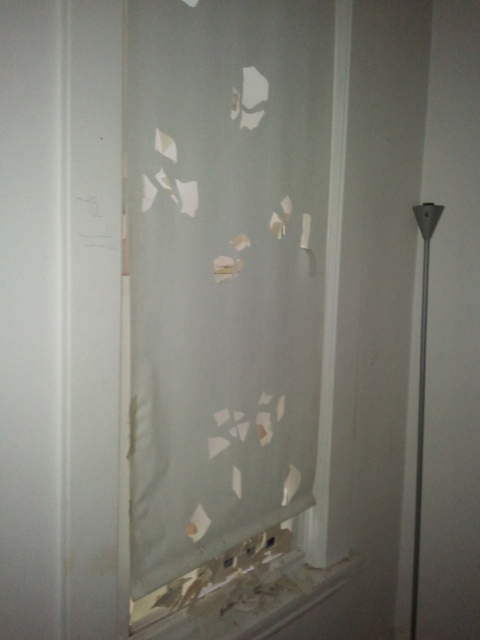 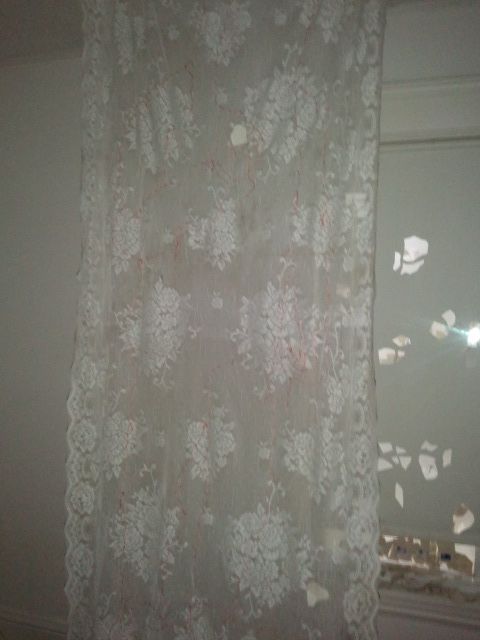 My two favorite exhibits were upstairs. The piece of work I found most visually interesting was a series of strings tautly crisscrossing the room, with a blackened Jenga game set stacked on a table in the center. Inscribed on a piece of paper next to the game pieces was the phrase, “What will happen / will not happen here.”

Hanging from these strings were various other inscriptions, such as this one: 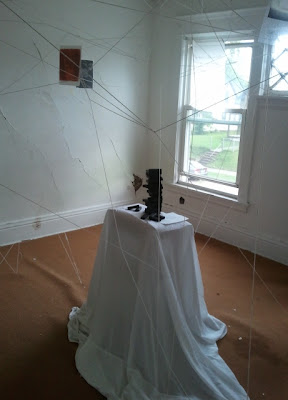 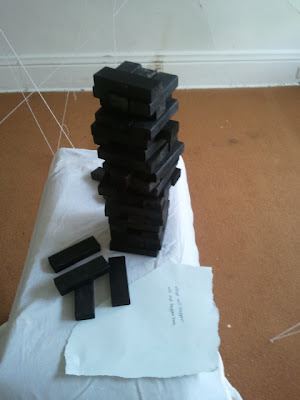 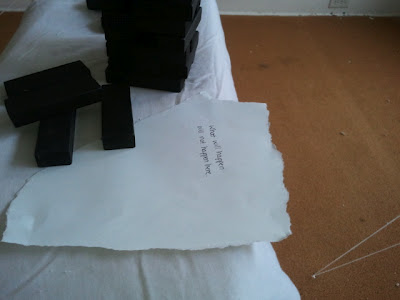 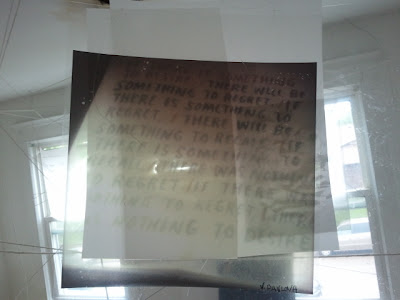 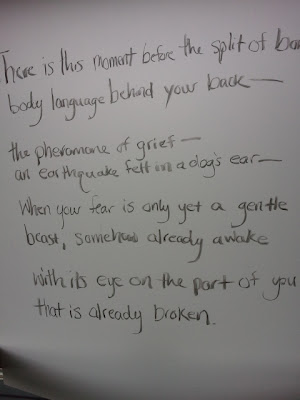 And then there was this: 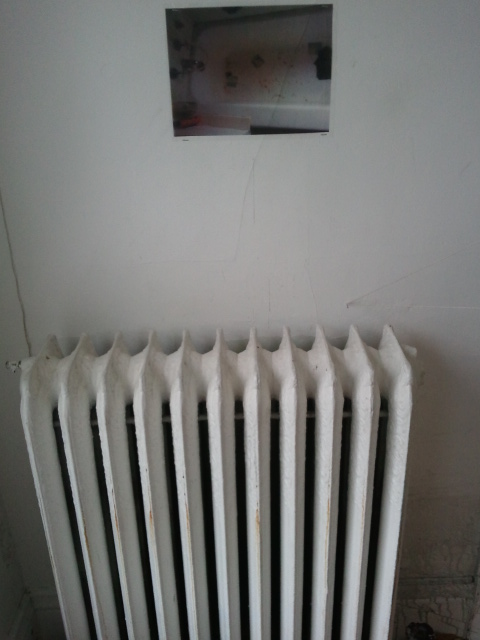 I can’t remember the last time I saw a home that still had its radiators untouched and still needed to be demolished. If nothing else, the city should be taking these out themselves and getting them into the hands of other developers, to cut down on their rehab costs. Or, you know, just not demolish this house in the first place. Seeing what appears to be at least a somewhat intact heating system in a house someone else thought wasn’t worth saving makes me desire, recall, and regret quite a bit.

The final room packed the most emotional wallop. I was still in shock over the decision to tear this house down, and missed the introductory inscription:

When people die, they become hyper-real as our collective memories add to the person they were. I will be creating a mural of my deceased grandmother. Beginning with a digital template, I will add then subtract from the image, applying and removing color and material. The process reminds me of how loss and grief affects our lives immediately and changes over time. As the memory of a person fades what is left in our minds is an aggregate of who the person was to us and who we have imagined them to be. This installation will chronicle the arc of how I have experienced my grandmother’s death. At first memories are additive, swelling with detail. However, what will remain at the end is a faded memoir, bright in some places, evermore vacant in others.

Now I didn’t notice this, but my brain did. Without even realizing why, my mind immediately brought forth memories of my own grandmother, who passed away two years ago. I thought of how she helped raise me, how active she was in her church and community, and I remember the picture of her decked out in full baseball catcher regalia, looking tough as nails. After people pass away, they kind of become frozen in one defining moment that encompasses the most–or at least the most recent–of what they meant to you.

That moment, which would take far too long to explain in detail here, hit me again while I was in this room. I thought of a favorite folk song of mine, “Water from Another Time,” that talks about the connection between past and present, and specifically mentions the protagonist’s grandmother. Only when I began to share these thoughts with the artist did I find out that the exhibit itself was about her own grandmother and that that woman was the one singing the music playing on the stereo. 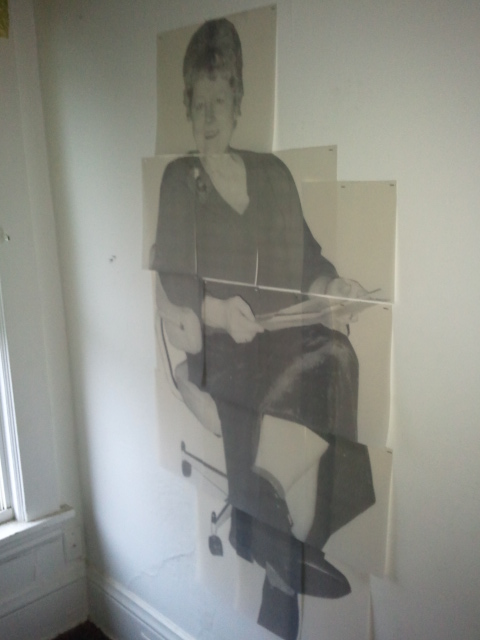 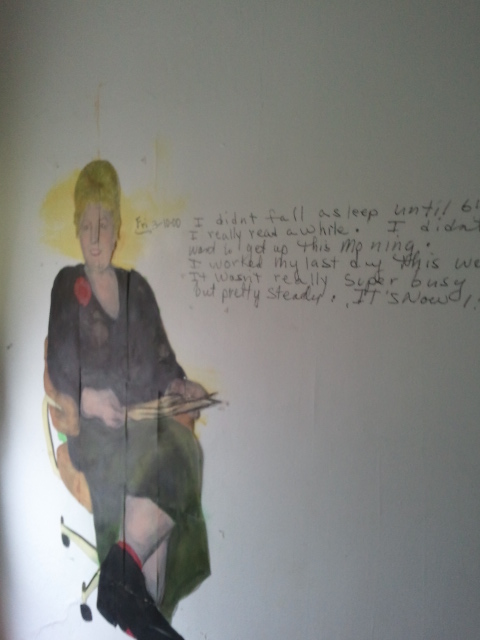 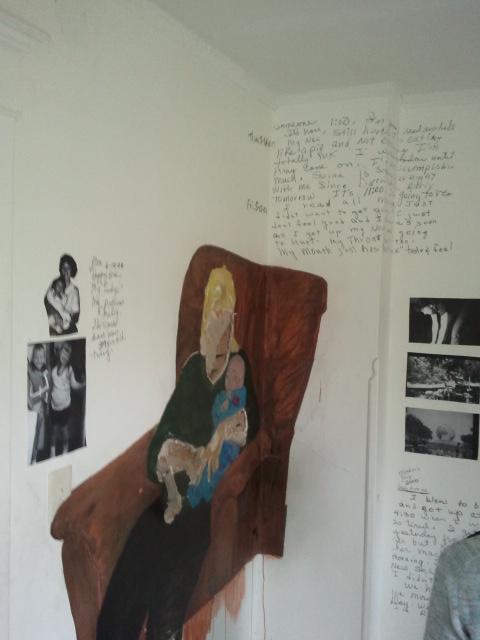 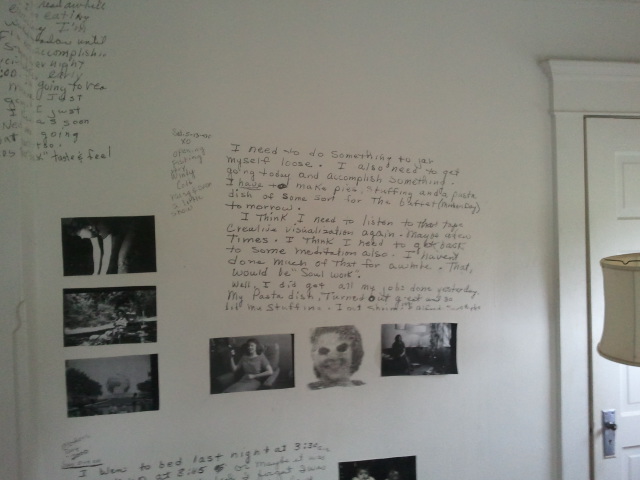 Whether 2930 Newton Avenue North is ultimately saved or not, the artwork inside will disappear. The only question is this: Will it disappear in a pile of rubble, or will it be erased when a new family paints over these walls and fills the rooms with dreams of their own?