The Hotdish Revolution has become nothing short of a phenomenon for the Holland Neighborhood in Northeast Minneapolis.  Since its debut in 2004, Hotdish Revolution has grown every year, changing locations more than once to accommodate the crowds that come either to compete in the hotdish and jello spectacular or to just plain sample the array of foods. Last year more than 300 people attended, eating their way through 60 casseroles and 15 jello dishes entered into the competition.

Lily Vaughn, Holland Board Member and two time winner for best spicy hotdish, is the first to admit that she didn’t think a simple neighborhood fundraiser like this would be so successful.

“I was one of those who thought, ‘oh yeah, right’ in the beginning but to see how it’s blooming out, it is just amazing,” she said.

She’s not exactly sure what it is that brings people in from as far away as Hudson, Wisconsin and Duluth.

What could be considered a bland event is quite the opposite.  Although you will see a good share of tater tot dishes, you may be surprised at the creativity and diversity of the food.

“All different cultures are doing this,” Vaughn said, adding that the spicy category is one of the more competitive categories that people enter.

A lot of creative talents drive this event from the very beginning; from the unique poster, designed each year by Carol Nagan, to the care one board member takes to prepare a trophy for the jello winner.

“It’s very artistic what people are coming up with,” Vaughn said.

The Board comes up with different ideas to make the event more pleasurable and every year it is more organized.

“There has to be flowers on the table for centerpieces,” she said. Vaughn will buy the geraniums for the event and then plant them in her garden later.

About 20 volunteers assist with the set up and clean up but more volunteers are always needed and welcome.

Celebrities help judge the entrees. This year there will be four judges per category, Past judges have included Edison High principal Carla Steinbach, former Park Board comissionerWalt Dziedzic, and artist Aldo Moroni.

“The Hotdish Revolution is a brilliant event, because it melds together several important and passionate elements:  history, culture, neighborhood involvement, good-natured competition, local artists, and of course, FOOD,” said Pederson. “The setting for the event is wonderful, too – the old Grain Belt Bottling House has been smartly renovated, and it adequately housed both the food portion of the event and a corresponding exhibit of works from local artists.” 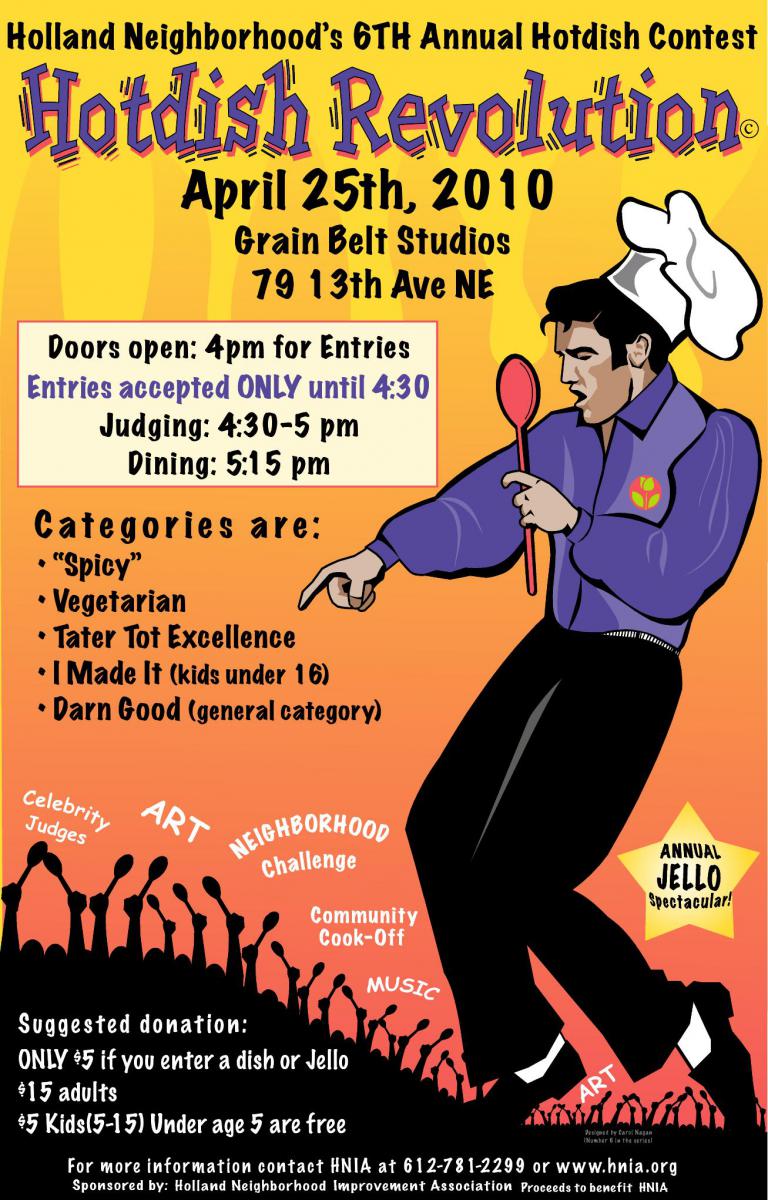 Judging the dozens of entrees is not an easy task and according to Pederson, “We judges started relying on each other’s recommendations as the judging time period began to draw to a close, and judges started lobbying a bit for their favorites in each category.”

“The winners in each category were selected by straight majority vote, and as I recall, we selected two or three grand champion hotdishes.  One funny thing I remember is that it was the first year of Instant Runoff Voting in the City of Minneapolis, and when we were arguing about how to tally votes for the winners, someone started advocating for a modified system of IRV to select the winner.  He even started making a complex chart to use as a way to tabulate results, but then I think someone brought him a beer and told him we need not make it quite so complicated.”

“I am honored to have been asked again to serve as a judge this year.  With a year of experience under my belt – literally – I’ll be able to pace myself better during the judging period so that I can taste more hotdishes.  It’s so much fun to talk to everyone there, but if you talk too much you lose precious tasting time.  I may need to be anti-social for short time in order to serve the greater good,” he said.

Vaughn is not entering the competition this year. “I’ve won two years now,” she said.

But she still plans on preparing three hotdishes for the event along with 120 cupcakes for dessert.

If you are planning on competing this year, arrive by 4:30 for judging. Doors open at 4 p.m.

Besides hot dishes, the jello spectacular has become a popular category for those who are artistically inclined. Last year the winning jello entry depicted Moses parting the sea.

Along with the food comes community, and the Hot Dish Revolution has provided a cross between a family reunion and a neighborhood block party.

“You can talk to everybody here,” Vaughn said.  “Everybody feels the same way. It’s like one big family.”  And everyone from the young to the old attends the event. 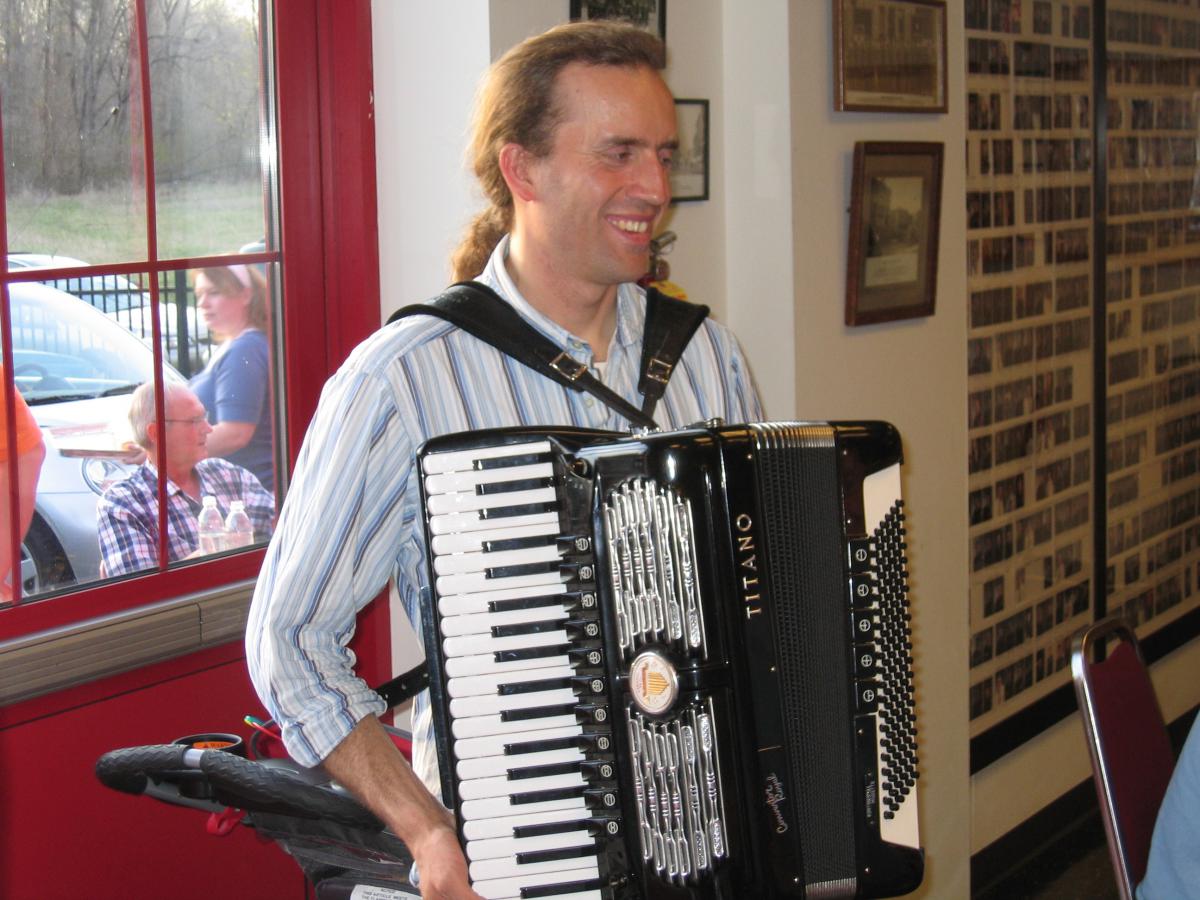 Along with the food, accordion player, Dan Turpening will be providing festive music.

Add to that a donation of a keg of the new Grain Belt Nordeast Beer, and this hotdish revolution becomes a real Northeast event.

“It really is a great time,” Vaughn said.

And as you can imagine, there are no leftovers.