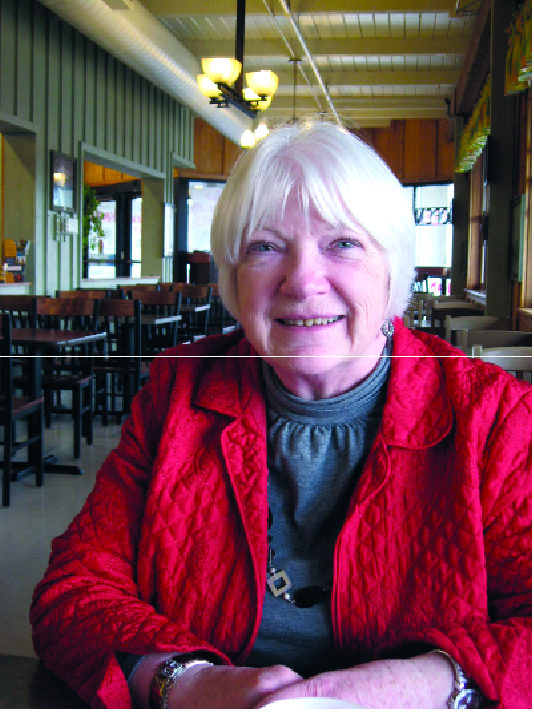 Eve Frank, Meals on Wheels coordinator, tells the story of an older client who fell down at home in the early morning hours. The client later told her daughter, “I tried to be as calm as I could, because I knew that my Meals on Wheels volunteer was coming.”

Frank added, “Many people have told us that they are very happy that we check on our clients.”

Meals on Wheels, also known as Hot Meals for Shut-Ins, covers Columbia Heights, Fridley, Hilltop, and Spring Lake Park. On April 26, the organization will host a 40th Anniversary fundraiser dinner at First Lutheran Church in Columbia Heights. The following month Frank—who has been on the job for 38 years—will retire. Her last day is May 31.

Meals on Wheels volunteers deliver hot meals to people who are unable to prepare their own food. The meals cost $4.85 each, and include two packets, one hot and one cold. The hot packet includes an entree, a starch, and a vegetable. The cold packet consists of bread and butter, dessert, milk or juice, and salad.

“We contract with Unity Hospital. Their staff prepares the food. They make about 115 meals a day,” Frank said. “We do the intake, collect the money, and fundraise.”

Fifteen churches, two local companies, a social service agency and a school provide about 500 volunteers a year. “Right now, we use 12 volunteers a day,” Frank said. “If it weren’t for volunteers, there’s no way we could stay in business. They have been the backbone from day one.”

Frank is a paid employee and one of three part-time people on the staff. The other two are Janet Fossum, who works 18 hours a week, and Jo Haugan, who works 10 hours a week. Frank is paid for 24 hours a week, she said, but she often works more. “Money is always a big issue. We never have extra money. Right now we’re in the worst financial shape we’ve ever been in.”

Meals on Wheels clients tend to fall into two categories: older people who want to live at home but need help preparing meals, and younger people, usually disabled, some with mental illnesses. Frank said that a typical client “is a man in his late 70s or mid-80s who has never cooked a meal in his life. They are often long-term clients. Women [in the same age group] tend to use our services when they’ve suffered an injury, such as a broken leg or hip. For them, it’s often a temporary arrangement.”

Volunteers deliver the meals early in the day; Frank said she thinks most elderly people eat the provided meals at lunch time and then eat a lighter supper.

Frank conducts intake interviews with clients, but said she doesn’t interview the volunteers. “The coordinators [at the churches and the companies] do that.” Volunteers must provide verification of liability insurance on their automobiles, and a drivers’ license.

There is no required number of hours for volunteers. “We will work with whatever time they can give us. Some people work one day a week, some work every other week. I have a teacher who only drives on school breaks.” Many husband and wife couples deliver Meals on Wheels, she said.

“I give the churches a schedule of how many drivers I need. There is a trip coordinator; last week the churches were Immaculate Conception in Columbia Heights and Fridley United Methodist Church; each was responsible for half the routes.”

The drivers don’t have time to stay and visit with the clients, she added. “There is not really a social component to this. The volunteers drop off the food, make sure the client is all right, and leave. Each volunteer gets between eight and 10 meals to deliver; a typical route would take no more than 45 minutes. Our coverage area isn’t very large.”

One problem that volunteers might encounter is getting clients to answer the door. “On our intake, I ask the client if they use a wheelchair, if they’re mobile, or if they’re hard of hearing. I will notify the volunteers that they need to knock loudly, ring the bell, or sometimes call the client on their cell phones.

“If somebody doesn’t answer the door, we tell the volunteers to only do what they feel comfortable doing. They might check the door to see if it is unlocked. They can call the office and we will make follow up phone calls to the client. If we don’t get an answer, we would check their emergency numbers, usually a relative, and call them. Or, we might call 911 and ask them to do a well check.”

Frank said that in the past, a driver found a client dead in their home. “I was grateful that it was one of my older, experienced volunteers.”

Church representatives serve on the Meals on Wheels’ board of directors. Drivers include church members and volunteers from area businesses, including Medtronic, Cummins Power Generator, and Achieve Services (a social service agency).

Frank said that while most volunteers tend to be older, the program also has attracted some student workers. “Spring Lake Park High School’s program has been going for about five years. The teams include two students and one instructor. Our clients love to see the young people.”

Peter Yelle, Spring Lake Park Schools community education coordinator, said that he is the advisor for the LEO (Leadership, Excellence, Opportunity) program, which is the youth component of the Spring Lake Park Lions Club.

“The kids participate in service activities at the school. Some of them came up with an idea to help Meals on Wheels. I asked Eve if a student group could do it, and she said they could. I started once a month with two or three high school kids. Now LEO kids do it a couple of times a month. A few years ago, I contacted other programs, special education and life skills, and they started delivering Meals on Wheels every week.”

He said that the special education students have more flexible hours. “A staff member from their program drives the students in the school van. I’m the back-up for off-school days. The kids really enjoy doing it and the clients like seeing them. The students ask me every year if they can do it again. Over the years, we’ve probably had about 60 students involved in the program.

“Eve is a great person,” Yelle added. “She’s generous and kind, and she has always been very supportive. She is passionate about what she’s been doing over these years.”

Frank said that in 1973, former Fridley United Methodist Church pastor James McChesney had some parishioners who were ill and needed meals for a short term. “He had heard about Meals on Wheels in other parts of the country and thought it would be a good idea for Anoka County.” Frank heard about the program through her church, St. Timothy’s Catholic Church in Blaine.

“When the coordinator job at Meals on Wheels came available, my husband had just gone on third shift. I decided I could devote two hours a day to it. That was July 1, 1975,” she said.

Frank said the job has changed through the years. “When we started, we had Blaine and New Brighton. Later on, we added Coon Rapids, Lexington, and Circle Pines. We helped form the Blaine/Coon Rapids program. I hired my sister-in-law [Mary Jo Herker, who worked there for about eight years] for that, and they’re still going.”

The delivered-meal numbers have ranged from 1,257 in 1973, to a high of 43,114 in 2008. “Our numbers have gone down as other Meals on Wheels programs, such as Presbyterian Homes, have started up. Now new clients on medical assistance have a choice of three providers. The younger generation wants more variety of options. They want frozen meals, and they want to receive 10 meals at a time so they don’t have to be home to receive the food. With our program, you have to be home for the deliveries.”

Frank said that she is retiring for two reasons: not only has she been on the job for 38 years, but she recently suffered a health crisis. A breast cancer survivor, she has had two surgeries since last Thanksgiving. Although she only missed one week of work, she said, “My husband said it’s time to retire.”

The couple plans to spend some time traveling; there are only three states in the United States—South Carolina, Alabama, and Georgia—that they haven’t visited yet. “We’ve been to 10 foreign countries. We love to travel, and my husband loves to take cruises.”

She said she has enjoyed her time with Meals on Wheels. “We have had wonderful support from the community, the Lions groups, the churches, and the veterans organizations. I really did love my job.”

Steve Smith, who volunteers for the program through Immaculate Conception Church in Columbia Heights, said, “Two words describe Eve: caring and commitment. She knows every one of our clients personally. She takes time to get to know them and their immediate families, in case one of the drivers encounters an emergency. She makes sure she greets all the drivers and thanks them for their service every week.

“Eve’s commitment to Meals on Wheels is complete,” Smith added. “The route cards are always in order. The addresses and phone numbers are accurate and the maps to the client homes are clear and easy to follow. I have delivered meals for a full week every six weeks for a year and a half and the order of delivery has never been off once. All of us drivers and our clients will miss Eve a lot. She has earned everyone’s love and respect.”