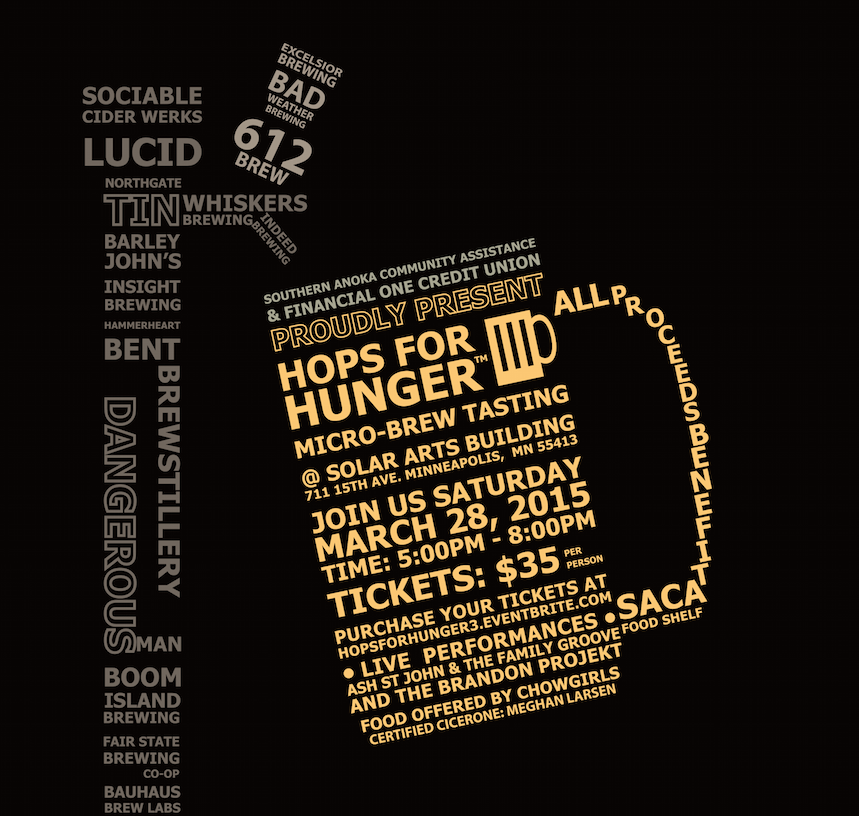 “We want to get into different types of fundraisers, not just pancake feeds and spaghetti dinners,” says Dave Rudolph, manager at the Southern Anoka County Assistance Food Shelf (SACA). With craft beer popular, what beer way than a local festival?

On Sat. March 28, SACA will host Hops for Hunger III, a beer tasting event with live music, catering, and a charitable bent. Sixteen Minnesota breweries will be pouring samples to guests, including Dangerous Man, HammerHeart, and Fair State.

It’s not just a chance for beer drinkers to sample some goods, though, the $35 tickets raise important funds and awareness for the hunger problems facing the local community. Hops for Hunger II raised $12,500 last year, and festivals 1 and 2 combined have bought about 175,000 pounds of food for the local food shelf.

For many, the food shelf offers a lifeline for keeping up with other expenses. For an individual earning between $8-14/hr, the food shelf offers an alternative to making that hard choice between buying food and staying in school, purchasing medication, or filling the gas tank to get to work. With the numbers of recipients rising, it gives increased importance to the awareness and fundraising that takes place at an event such as Hops for Hunger. “It really helps out a lot,” Rudolph says. Plus, “it’s some really good beer.”

With just 16 participating breweries and about 250 tickets for sale, the event is smaller than typical beer festivals and offers more of a community atomsphere where attendees can easily chat with the brewers. Hosted in the Solar Arts Building in Northeast Minneapolis, which also houses Indeed Brewing, Chowgirls Killer Catering (also at the event), and several artists, the space limits the scope of the event but helps to foster that intimate experience.

Hops For Hunger III will feature Chowgirls Killer Catering, live music from Ash St. John & the Family Groove and The Brandon Projekt, and the following breweries: