Nationally, SNAP recipients receive an average of less than $4.40 per day. The number is even less in Minnesota, around $3.86/day, about $1.30 per meal. One in seven American families struggles to put food on the table. The vast majority (83%) of households receiving SNAP, formally known as food stamps, are below the poverty line. Most families (90%) receiving SNAP run out of money for food by the third week every month. The program is not a giveaway: able bodied workers without dependents may be unemployed for no more than three months in order to remain eligible for SNAP. Illegal immigrants are not eligible for SNAP. 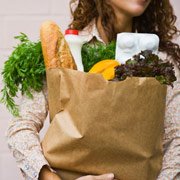 In Minnesota, 45% of families are below the SNAP eligibility threshold of 165% of the poverty line. That totals over 550,000 people. The average cost of a meal in our state is $2.56—more than $1 in excess of the per meal allowance under SNAP.

For 40 years, Congress has passed a farm bill that includes the SNAP program. The vast majority (72%) of the Department of Agriculture’s budget relates to nutrition assistance. This year, for the first time in decades, the conservatives in the House of Representatives, have severed the SNAP program from the rest of the farm bill. The vote was 216-208, with 12 conservatives voting against the bill. Minnesota conservatives Bachmann, Kline and Paulsen all voted in favor of it. Conservative leadership suggests that the SNAP program can be addressed separately. This was in the face of 532 farm organizations, including the largest farm lobby, the American Farm Bureau Federation, that called on the House not to split the bill in two.

The current SNAP program will expire on September 30, if no bill is passed. House Agriculture Chairman, Frank Lucas (R-Okla.) promised a separate SNAP bill as soon as he can “achieve a consensus.” Speaker John Boehner wanted to pass a farm bill, and promised he would “get to those other issues later.”

John Kline said he did not understand the votes against the pared down farm bill, because “you’ve got to have farm policy.” However, Colin Peterson, who championed the bipartisan farm bill that was defeated by House conservatives several weeks ago, led the opposition, calling the conservative action the “most divisive political move of his nearly 40 years in politics.”

The House passed its bill on July 11. The next day, Kline was in Red Wing, meeting with local farmers. The purpose of the meeting was to view crop damage from winter and spring weather, and to discuss the availability of federal aid under the existing farm bill. Afterwards, he commented on the newly passed House bill, saying it was necessary to have farm policy in place for, without it, farm policy would revert to the law enacted in 1949. He failed to mention that the absence of a SNAP bill would result in reverting to policy in existence in the 1930’s.

Now that both the House and Senate have each passed a farm bill, there will soon be a conference committee meeting to try reconciling the two proposals. In describing the anticipated conference committee bill, Kline said, “My expectation is that I’ll hate it, and I’ll vote for it because we need to have farm policy.”