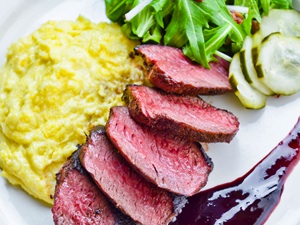 Kangaroo: Build your foodie word power with a new food word a day. Today’s food word is kangatarianism. Kangatarianism, according to Wikipedia’s kangaroo meat entry,  “is a recent practice of following a diet which excludes meat except kangaroo on environmental and ethical grounds. ” Kangatarians point out that kangaroos “live natural lives, eat organic food, and are killed humanely,” and also have much less harmful environmental impact than grain-fed beef.

And here’s a bonus word: “australus.” Australus is the culinary term for kangaroo meat, (like beef is to cow, or venison is to deer) chosen in a competition sponsored by the Kangaroo Industry Association of Australia.

The reason I mention this is that Hell’s Kitchen, 80 S. 9th St., Minneapolis, is now featuring kangaroo on their dinner menu: “seared kangaroo top loin served with sweetcorn aged-cheddar polenta, blackberry BBQ sauce and pickled vegetable salad,” for $19.99. Haven’t tried it yet, but if you do, drop me a line or post a comment.