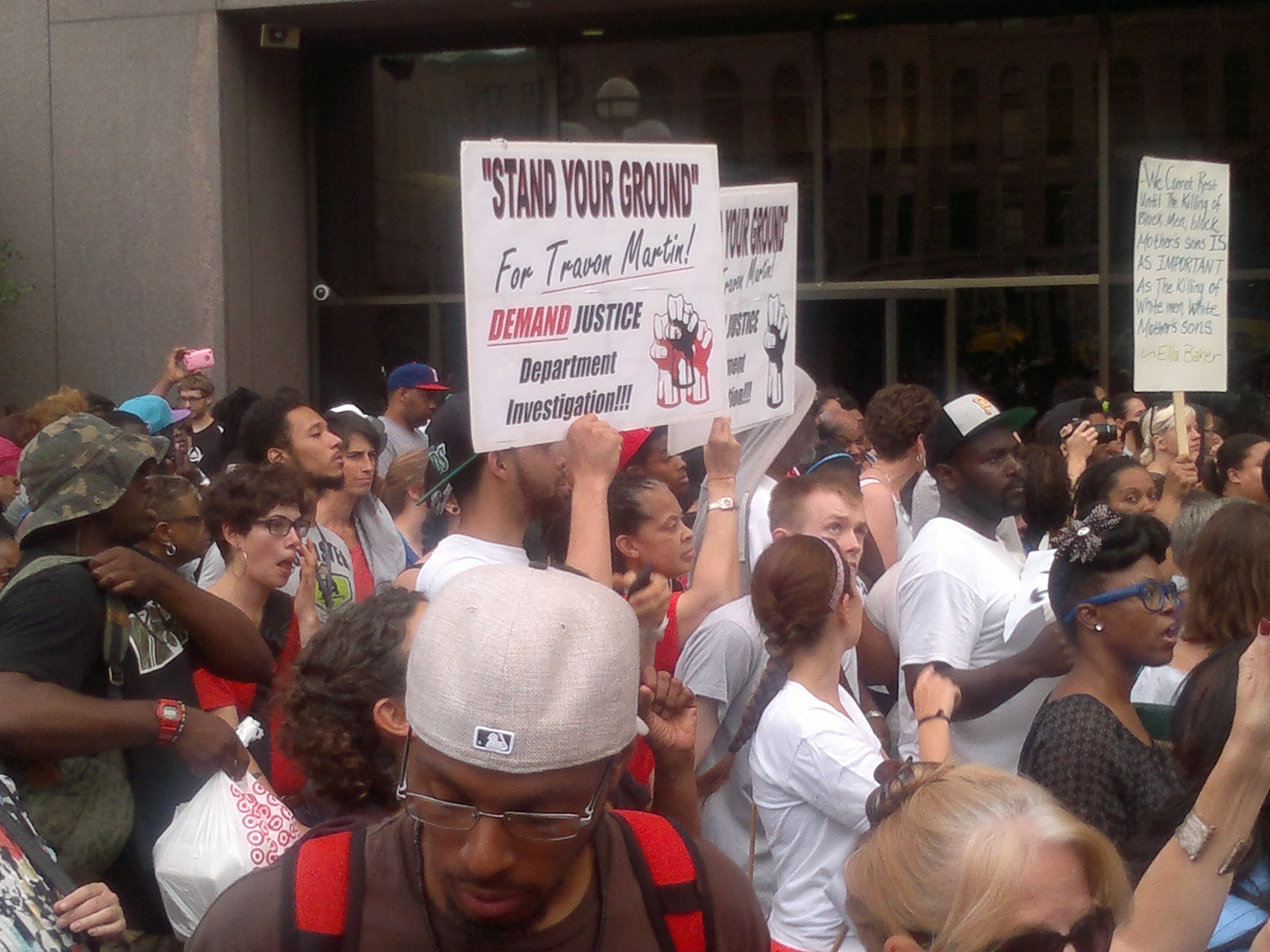 The sweltering heat did not deter the crowd of Minnesotans who gathered in downtown Minneapolis on July 15 to protest the acquittal of George Zimmerman, Florida teen Trayvon Martin’s killer.

Multiracial participants of all ages and of diverse ethnic and religious backgrounds attended to express their concerns and anger with racism in the criminal justice system, and the racial profiling of black males and communities of color. Organizers from Neighborhoods Organizing from Change said they collected 3,000 signatures from participants on clipboards.

The organizers had three demands: for the United States Department of Justice to bring criminal civil rights charges against George Zimmerman; for the prosecution of the police officer who recently shot and killed 22-year-old Minneapolis resident Terrance “Mookie”

Franklin; and for the decriminalization of black youth and youth of color, locally and nationwide.

Raising their fists in the air to symbolize “black power,” marchers zigzagged through downtown Minneapolis for more than an hour after listening to speeches.

Dr. Nekima Levy-Pounds, associate professor of law at the University of St. Thomas Law School, was one of more than a dozen speakers who took the mic to talk about racial inequity.

Her impassioned speech called for a second civil rights movement in America.

“We need to wake up! It’s time we wake up from our slumber!” she implored, calling for the African American community to stop being complacent about civil rights.

Many speakers told the audience that the cause of the deaths of both Trayvon Martin and Terrance Franklin are connected by racial profiling. Franklin’s family and friends say his death was a result of excessive force by the police. There have already been several rallies in Minneapolis seeking justice for Franklin.

The rally was organized by Neighborhoods Organizing for Change (NOC), the Justice for Terrance Franklin Committee, Save the Kids, Idle No More, Occupy Homes, and other community groups, activists and community members.

Protesters tweeted at #HoodiesUpMN and #HoodiesUp, some of which can be found in the Storify below.  [If you don’t see the Storify photos and comments below, please refresh your browser window.]

• BEHIND THE STORY | Trayvon Martin and George Zimmerman: When will the cycle of racism stop? (Sheila Regan, 2013)