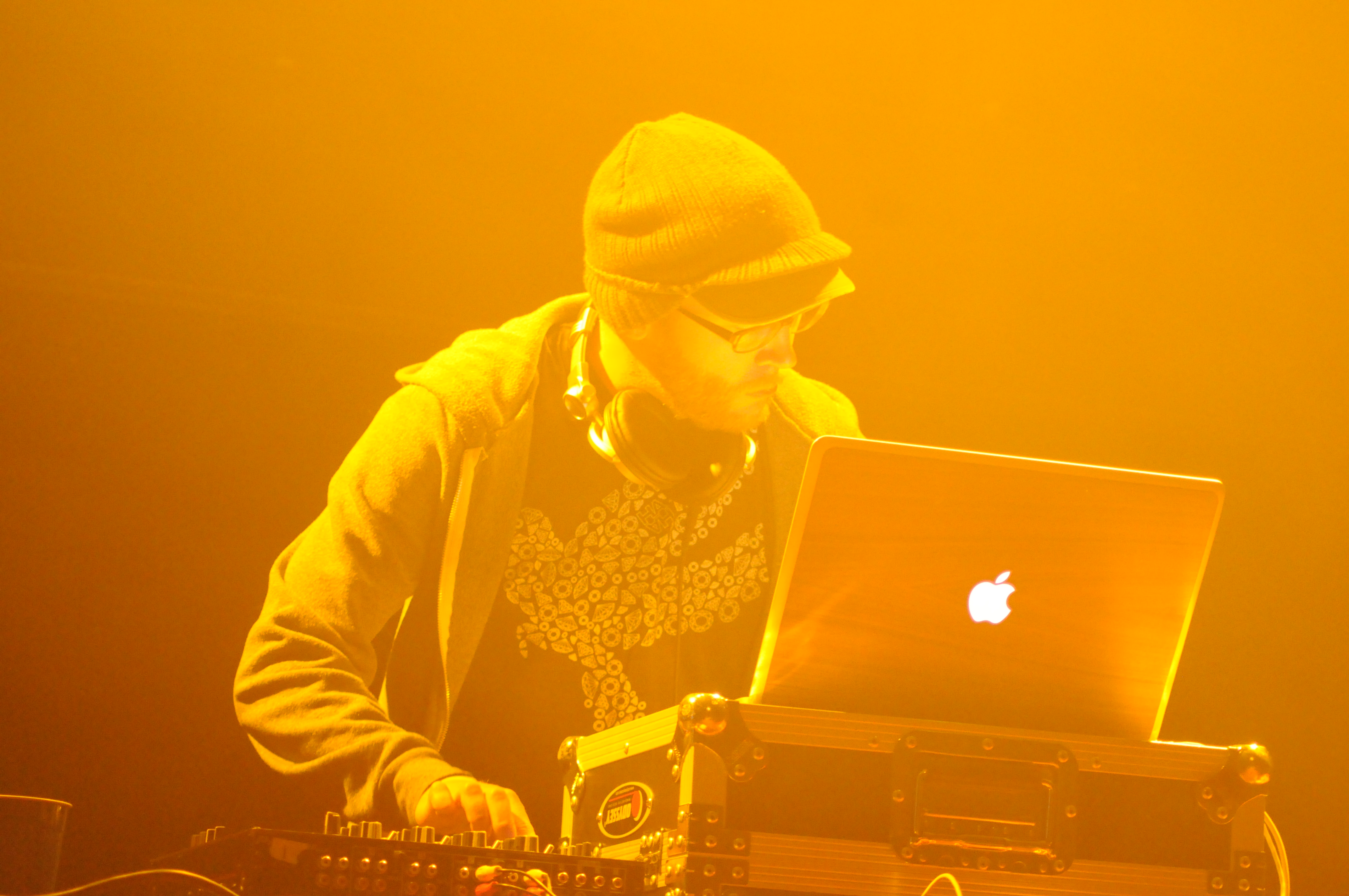 I’m going to say something that might surprise or even shock you: on Thursday night at the Varsity Theater, openers Elite Gymnastics put on a more entertaining show than the Hood Internet. The key word is “entertaining,” but nonetheless, the main event was underwhelming compared to the quirky, even baffling local boys who at least managed to retain my attention.

Elite Gymnastics are a Minneapolis-based chillwave (or is it?) project comprising producer Josh Clancy and vocalist James Brooks. According to public statements, the band is possibly a joke or possibly a real non-chillwave band founded on the presumption that claiming to be a chillwave band would generate hype. Either way, their live set kind of satisfied all of those labels: it was funny, it was chill, it was also not chill.

Speculation aside, here are some things I can say with certainty about Elite Gymnastics: Clancy is absolutely adorable and looks like he was born to be the MacBook player in an electronic music project. Though I’m partial to electronic music (and to Josh as a person), I thought he was really fun to watch and seemed much more enthusiastic and absorbed in the moment than the act to follow. Brooks was both funny-ha-ha and funny-weird as he paced back and forth across the stage, never really facing the crowd, half-singing and half-speaking about such hip topics as all the drugs he’d done at First Ave. 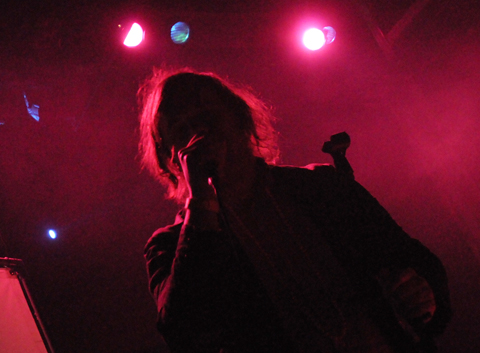 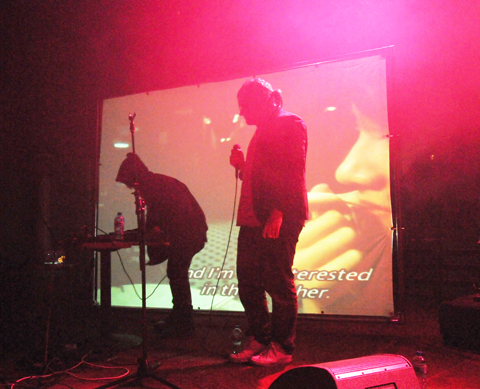 Elite Gymnastics finished their set and shortly thereafter we were greeted by the Hood Internet, an (alleged) pair of mashupcore remix artists: Aaron Brink (known as ABX) and St. Paul native Steve Reidell (known as STV SLV). Yes, there are two people in the band, though there is some confusion as to whether ABX was actually at the Varsity or if the second person occasionally on stage whose face never caught the light was in fact a security guard. 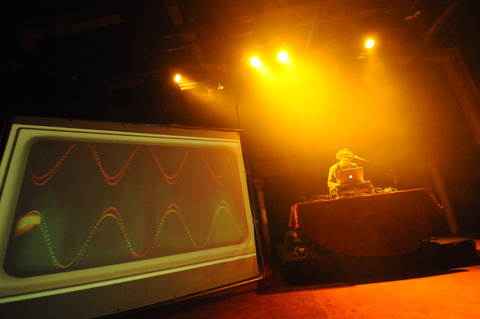 Though he (they?) was (were?) on stage for nearly an hour and a half, I can sum the set up rather succinctly. In fact, those of you who missed the show are in luck, for here I have reproduced the formula for how to put on your very own Hood Internet show: Find a “cool dad.” If you can’t find one, just locate any dude in his mid-thirties and then put him in the clothes of a hipster 19-year-old. Put him on a box on a stage with a laptop playing the Hood Internet mixtapes on shuffle. Give him the following script, and ask that he read from it between every three or four songs:

“Let me hear you, Minneapolis!”

Instruct him that during song breaks where he is not reading from the script, he should make exaggerated, arm-extended shrugs, seemingly to imply a sassy internal monologue somewhere along the lines of, “What do you want from me, huh?” Tell him to do that for a couple hours. The end. 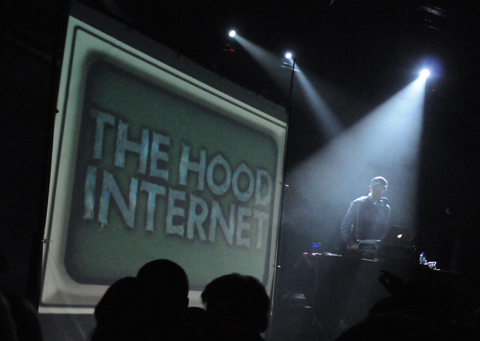 By now I’m sure I’ve betrayed my obvious disappointment at the Hood Internet’s live show, but with good reason. For the unfamiliar, the Hood Internet are most commonly compared to Girl Talk. Whereas people go absolutely nuts for Girl Talk—when Gregg Gillis’s most recent album dropped last fall it was more hyped, discussed, blogged about, and memeified than even this whole Rebecca Black thing—the Hood Internet exist much more under the radar. The difference between the two artists is that while Girl Talk crams countless samples, riffs, and snippets into each track, the Hood Internet typically only mash two songs per track. Maybe it’s my lack of knowledge of the full canon of classic songs outside of Scandinavian pop music and Top 40, but I much prefer the more straightforward stylings of the Hood Internet.

Unfortunately, though, what simplicity lends to the recorded tracks it robs from a live show. Sure, we heard songs we recognized and liked (was that R. Kelly’s “Ignition”? Modest Mouse’s “Float On”?) but aside from half a room of sweaty, maniacal dancers, the live show added literally nothing to the experience of listening to the their MP3s. I avoided the perspiration and took in most of the show from the back bar, a vantage point from which STV SLV looked like a fringe politician speaking from a podium to a small crowd of invigorated supporters; they were all in, but the rest of us were unmoved. 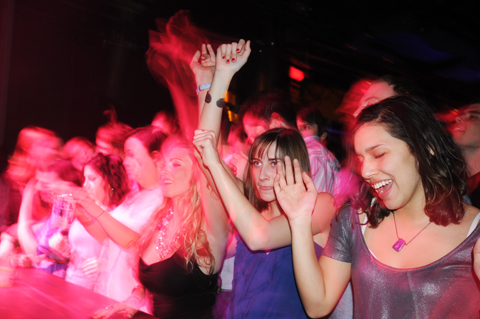 The climactic moment of the show was probably STV SLV repeatedly chanted “swag” over a mashup of Arcade Fire’s “Sprawl II” and Blondie’s “Heart of Glass,” a compilation that’s very cleverly constructed but decidedly un-swag by most people’s definition. Most of my friends and I were sitting down by this point (not a great sign for a dance show) which only made the disparity between what the show was and what the show could have been all the more obvious.

I’m still a major proponent of the Hood Internet, but especially at $12 a ticket, I’d recommend saving your money, downloading their five mixtapes, and listening at home. You won’t miss much. 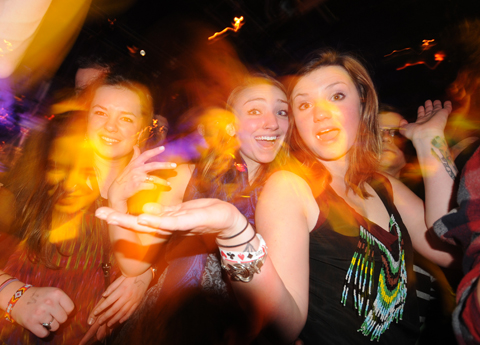 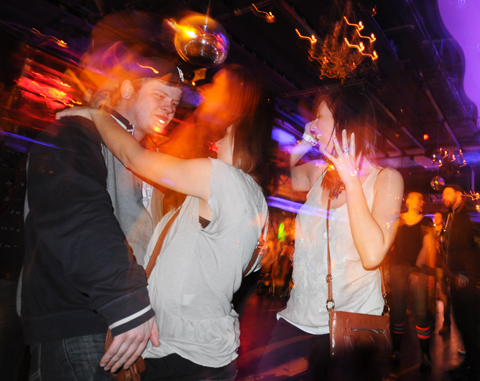 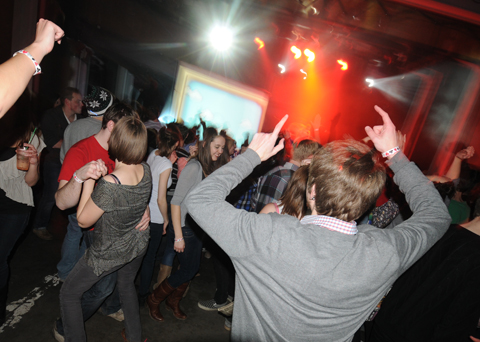 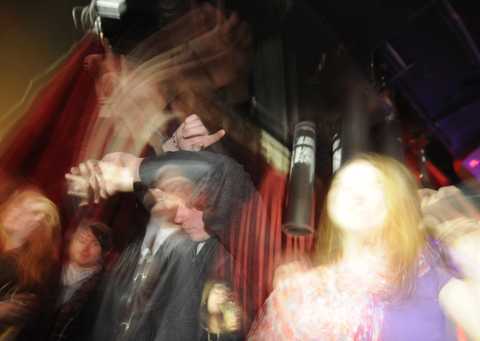 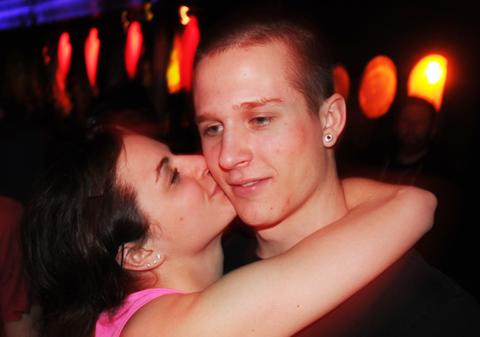 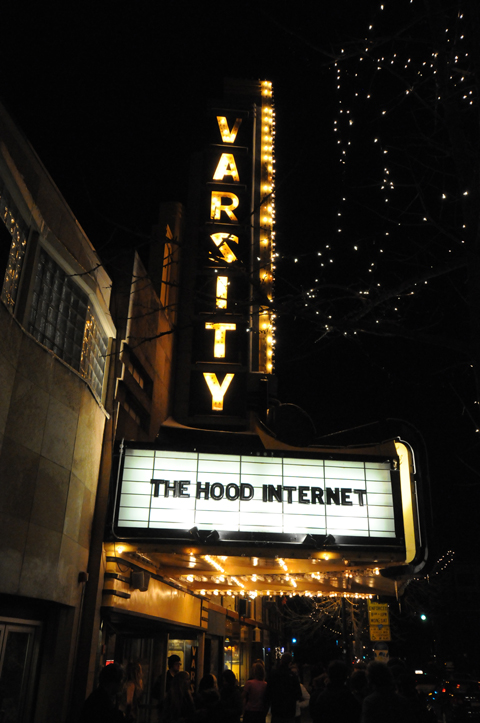