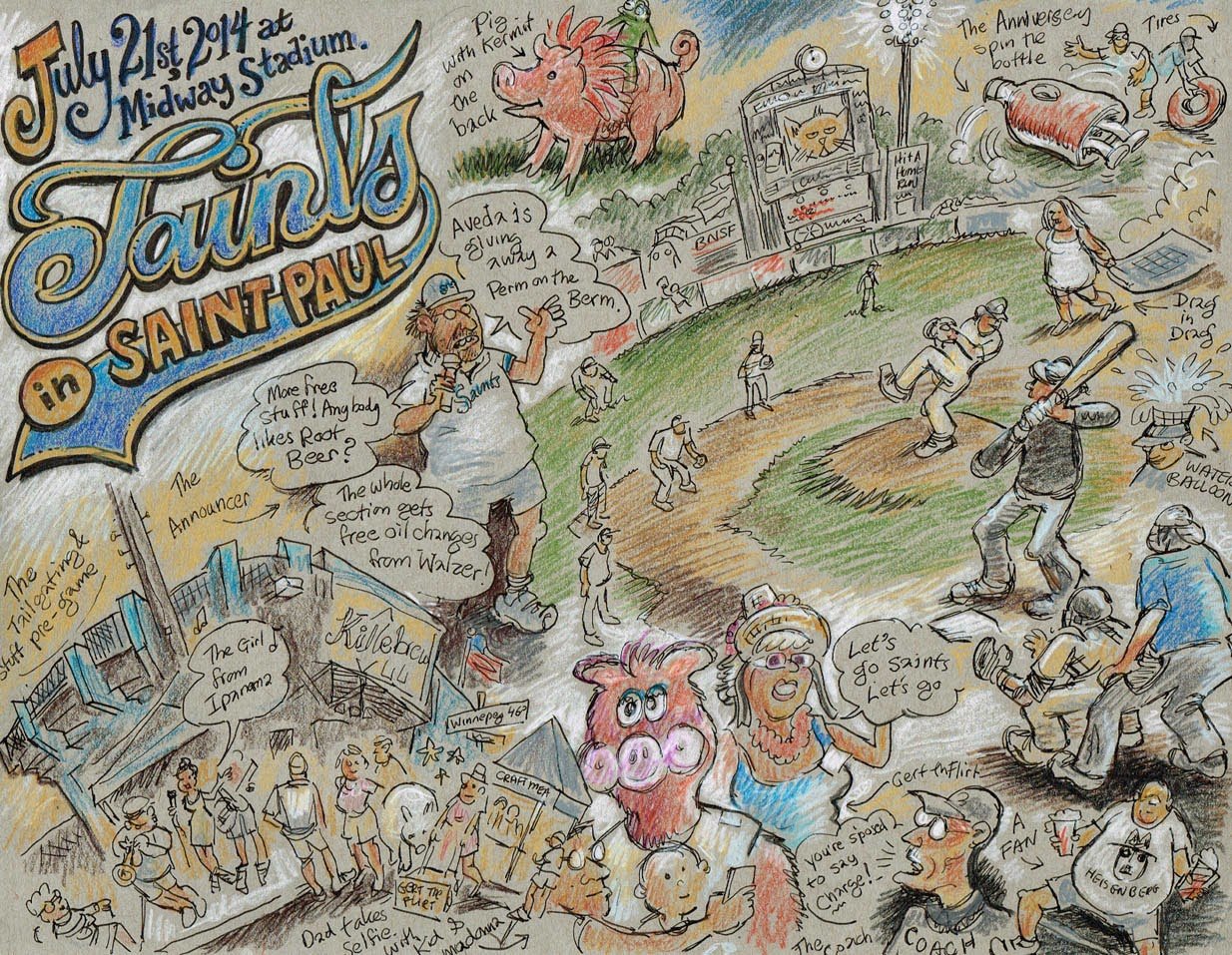 When I was a kid, I watched the Olympics on television and they had this artist with a big mustache painting a big canvas. That painter was Saint Paul native Leroy Neiman. Whenever there was a dull moment or a break in the action, the announcer would ask, “What’s Leroy Neiman up to?” and the cameraman would pan to the painter daubing the canvas with bright pigments. Somehow, Neiman was able to finish the painting just as the games ended. It was real performance art. Here’s a YouTube video showing Neiman painting. Here’s another one.

Neiman lived the good life, hobnobbed with politicians, celebrities and sports legends. Neiman’s paintings and prints sold well and he raked in the dough. He had a posh apartment in Manhattan and travelled the world in style. But, there was one thing that Neiman could not obtain in his lifetime – respect in his hometown.

Leroy Neiman planned to donate millions of dollars worth of art to a proposed museum in the Jemne Building on Kellogg Avenue when Pioneer Press columnist Katherine Lampher penned a nasty condemnation of Neiman’s artwork. Lampher declared Neiman’s art “stinks” and compared it to Precious Moments figurines and ceramic villages of Little Dickensian houses.” The museum never happened and Neiman remained bitter all his life. He wrote about the column in his autobiography, calling it a “savage, insulting attack on my character and work. I feel like I was mugged … in my old home town.” What a terrible way to treat a local legend! I would hate to see Lampher have the last word on Neiman’s legacy in Saint Paul.

I can think of a few ways to honor Leroy Neiman. My first idea is a sketch-out in honor of Leroy Neiman. A sketch-out is a social event where artists of all abilities gather to sketch. The ideal place for the annual Leroy Neiman Sketch-out is the new ball park under construction in Lowertown. Neiman sketched and painted baseball and Lowertown is an artist community. It would be way awesome to invite artists and baseball fans to sketch the Saint Paul Saints. It would be even more fun if the sketchers wore paper versions of the trademark Leroy Neiman mustache. It would also be awesome if the event raised money to fund a program to benefit the kids in Neiman’s old neighborhood in Frogtown. Maybe a portion of the proceeds could support art programs in the schools.

Roberta and I had a lot of fun sketching the Saint Paul Saints at Midway Stadium this summer. Here are our sketches:

The new ballpark and its fun spirit is taking shape in Lowertown – a sketch I did last week: 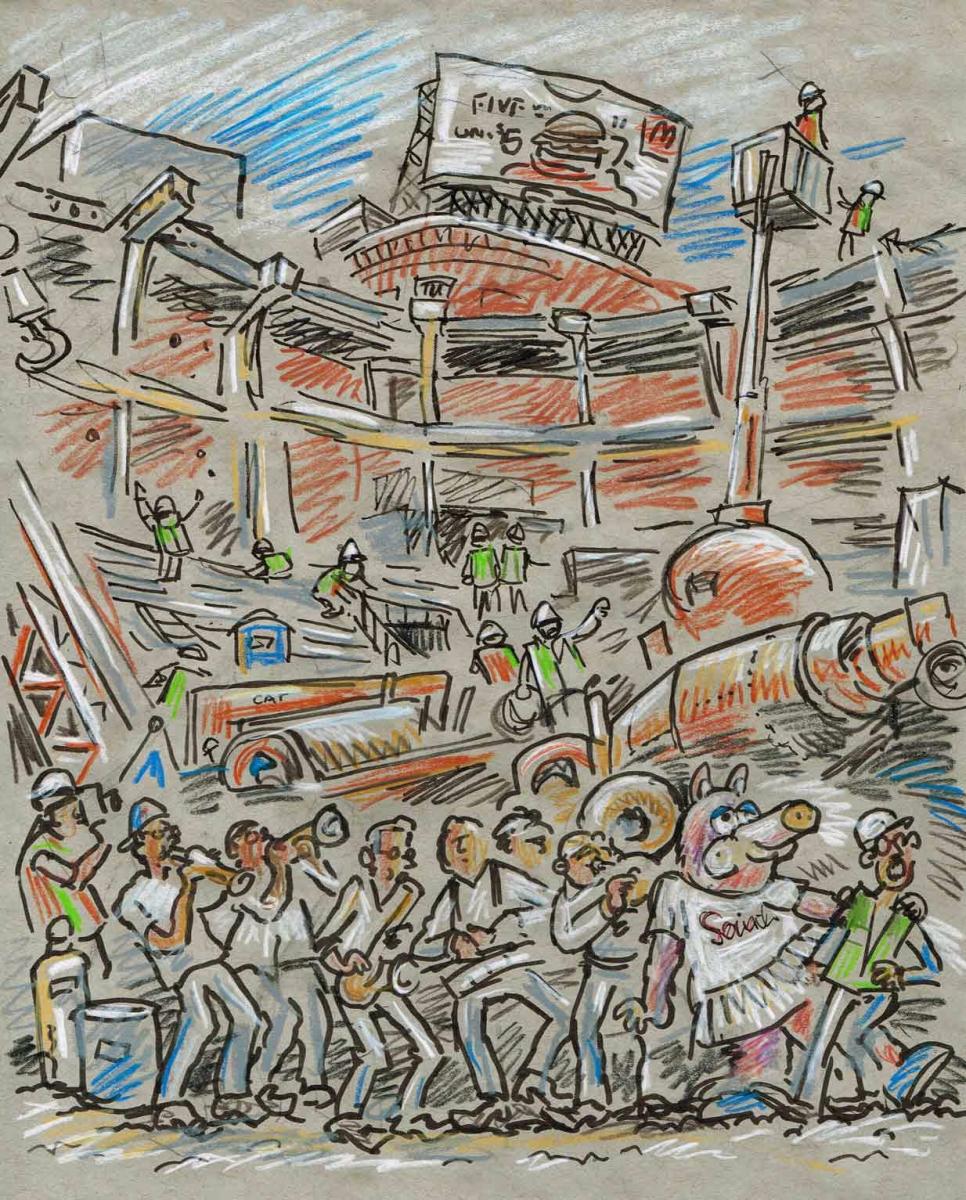 Another way to honor Leroy Neiman is to create a museum for commercial art in the still-vacant Jemne Building. The Twin Cities has a bunch of art museums, but they all look down their noses at commercial art. Minnesota has been home to many great commercial artists and many more have toiled for companies like Brown and Bigelow. A museum would go a long way to remove the outdated stigma that commercial art is somehow inferior to “fine art”.

Here are some quick sketches I did this week of the two Frogtown homes the young Leroy Neiman lived in and the Jemne Building – click on the sketches to make them bigger: 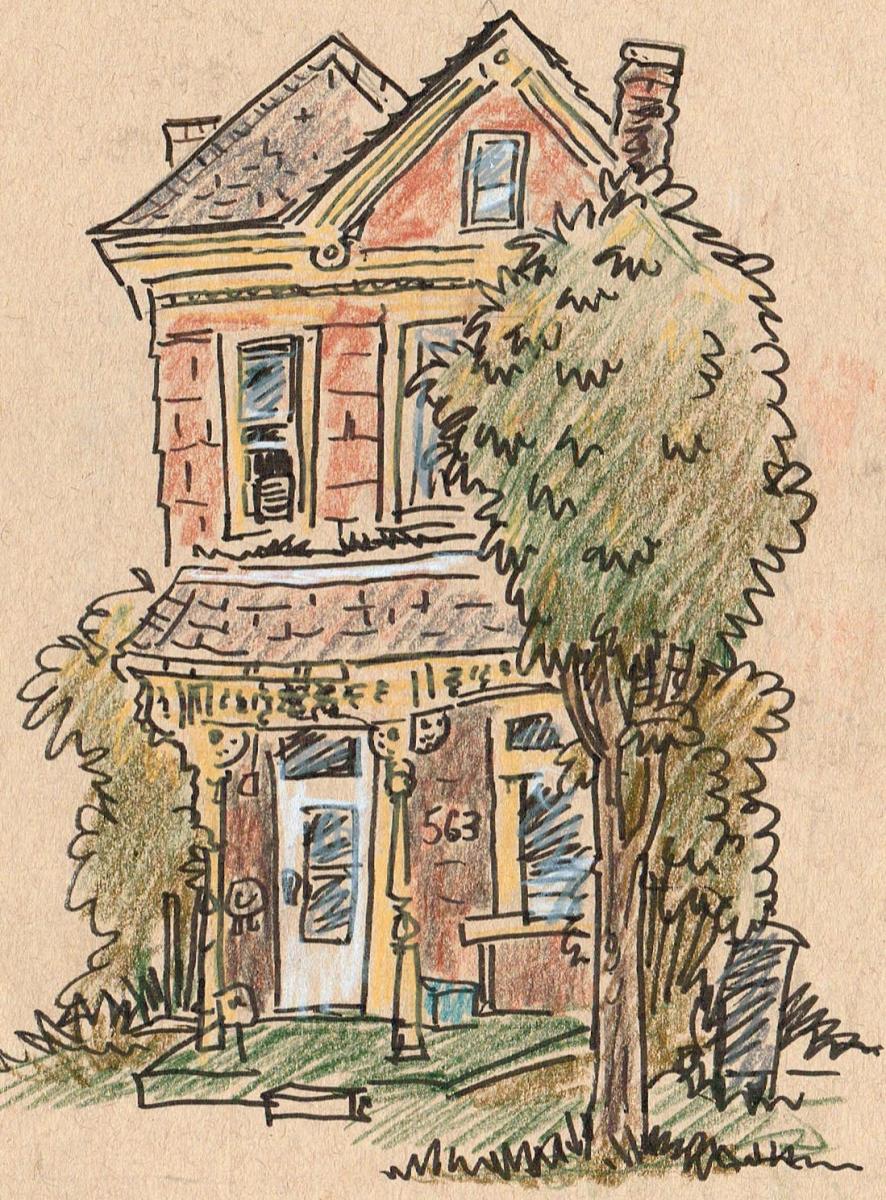 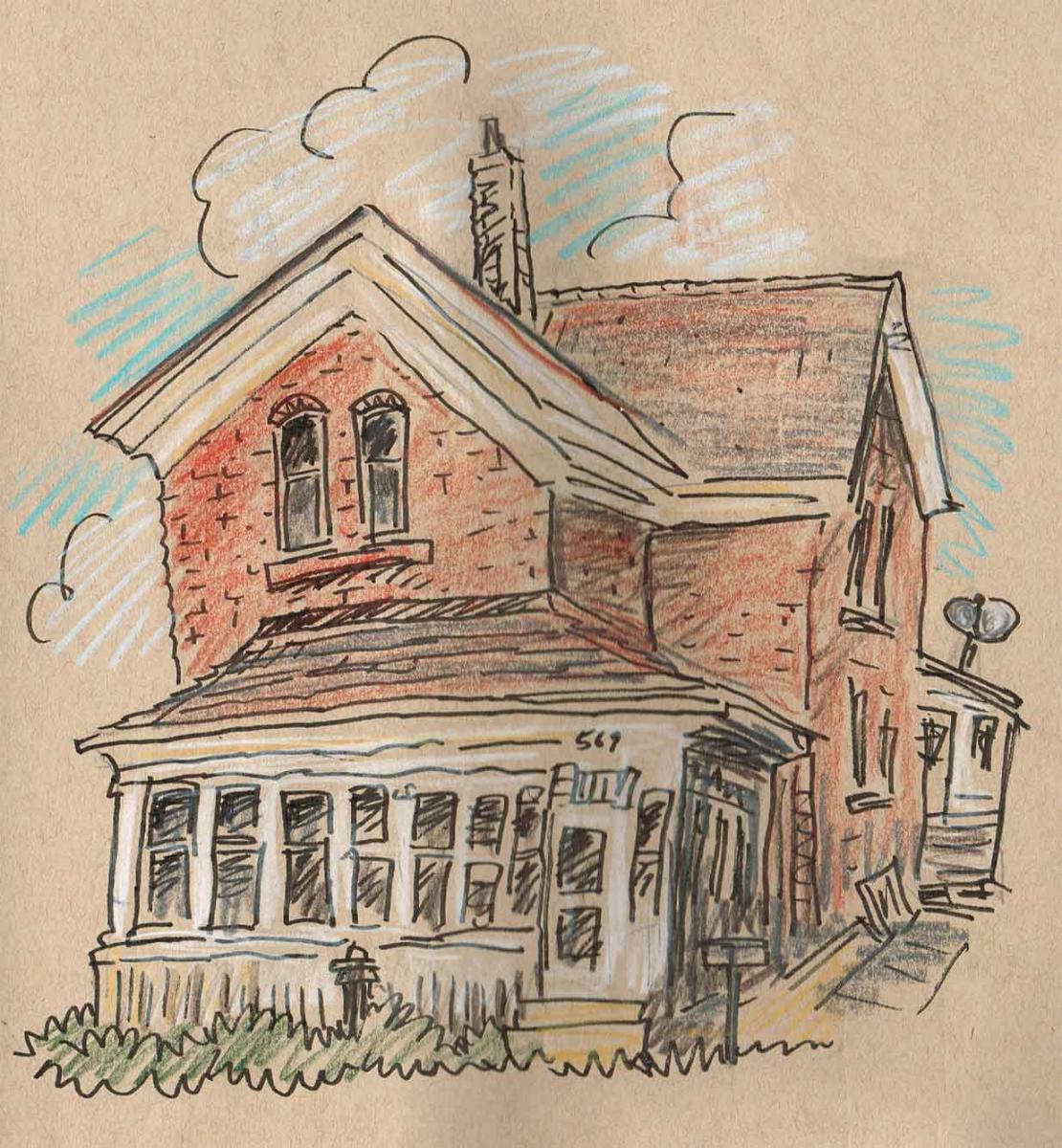 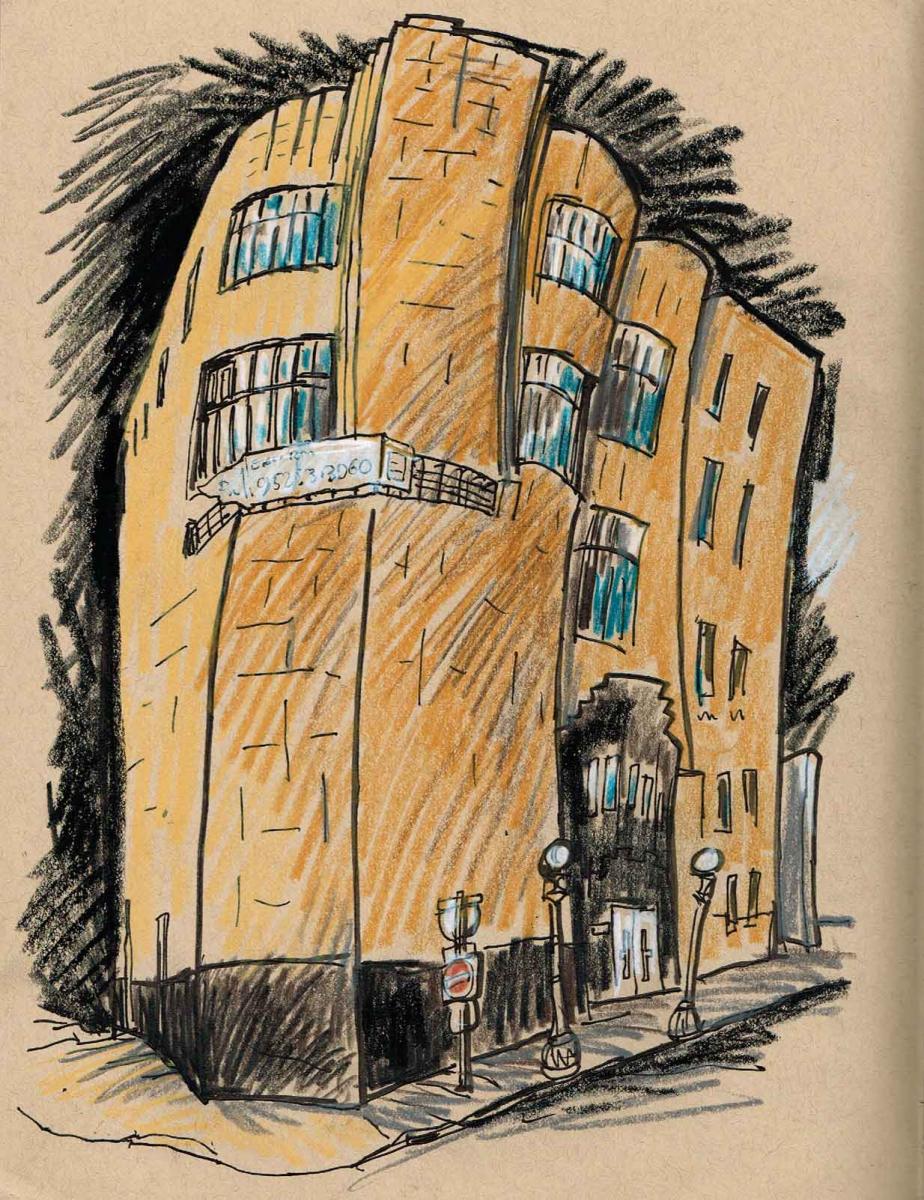 NOTE: I will be taking a break from posting Sunday Sketch to finish some projects. I have also been distracted recently by a defamation lawsuit in which I’ve been named a defendant. I’ll be back when it is all sorted out.