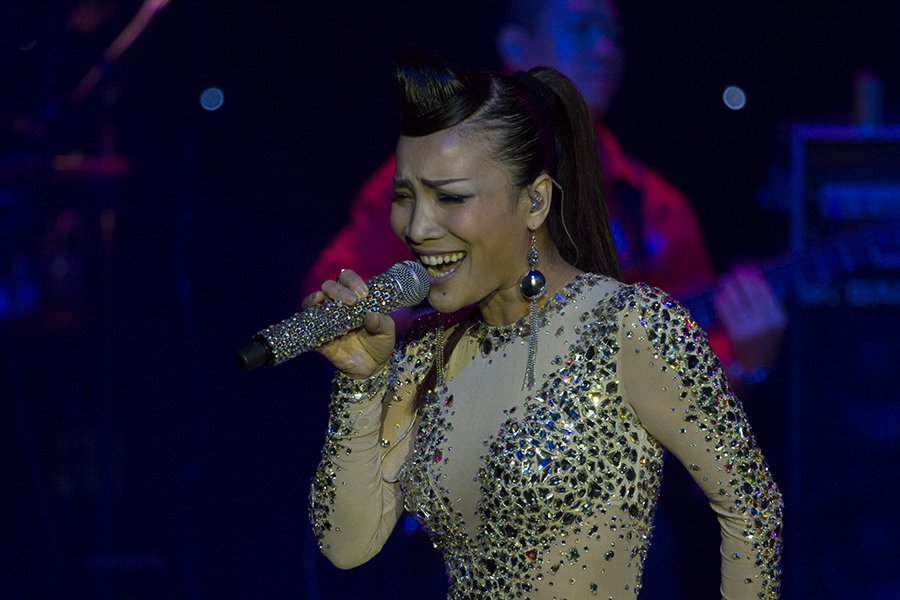 On August 4, 2013, Vietnamese pop star Hồng Ngọc culminated her international My Life tour in a final performance at Mystic Lake Casino. The main showroom of the casino was near capacity with an audience that spanned kids to senior citizens. There was obvious excitement in the crowd before her five-piece back-up band Strikerz warmed up the room with a few instrumental rock sets. After that, her tour mates performed a few songs with the Strikerz supporting. Trinh Nhat Tuan, Nhat Tinh Anh, and Pham Khanh Hung are all younger gentleman who performed energetic romantic ballads with considerable showmanship. Each of them had their own approach, and though they shared a general visual stlye, I got the sense they were using the opportunity to reach a wider group of fans. Henry Chuc is more established and  brought a mature presence to the stage, he took the time to perform more reflective sounding ballads which I imagine appealed more to the older members of the audience.

Hồng Ngọc, draped in sequins and glitter,  joined the group of supporting acts for a routine in which she exchanged duets with each of them. She shared quite a bit of banter in Vietnamese,  which was lost on me, but I got the impression that she was expressing the thanks and happiness she felt after performing with them throughout the tour. They left the stage for the time, each of them to return to perform later during her wardrobe changes, and she performed a series of high-energy pop songs which were driven by a range of contemporary Top 40 rhythms. After several of these more energetic songs, she left the stage to change into a less flashy dress. On her return, she changed the show into a set of slower songs which were inspired by a variety of musical styles. Latin, new wave 80’s, and sitar could be heard, adjusted to fit the tempo and mood of her flashy big room show. A final wardrobe change brought her back in a red and sequin outfit and a shift into a slower set of romantic ballads. She brought the show to an end with a rousing, high energy song which was a hybrid of ballad, club music and bass-heavy rock and roll. She got the audience to their feet, many of them standing from their seats to wave and clap to her finale.

Hồng Ngọc is described as “The Lady Gaga of Vietnam,” a moniker that I think is a misnomer. Both of them are international performers, and clearly Hồng Ngọc has an appeal that extends beyond the physical boundaries of Vietnam. She does perform in Vietnamese and the majority of her crowd understood her banter and lyrics, but she does bring a level of showmanship that puts her in a global category. I don’t think the comparison to Lady Gaga is appropriate at all, though. Hồng Ngọc is flashy and energetic, for sure, but her stage persona and presentation is much closer to classic adult contemporary performers such as Cher, Striesand or Neil Diamond. Her duet with Henry Chuc could very easily have performed in a Vegas dinner showroom instead of the Mystic Lake Casino. Her pop sensibilities are much more family-friendly than Lady Gaga or even Katy Perry.

She lost me with most of her ballads, but I could see the audience enjoyed them and were what they wanted to see and hear. Hồng Ngọc is also very verbose in her onstage banter, another thing she shares with her showroom colleagues, but she is an engaging storyteller and always got laughs from the crowd during the substantial breaks. Again, all of the spoken language was lost on me but her body language and performance gave me the impression she was telling “road stories” and a little bit of background for each of her songs. I didn’t get the feeling these breaks slowed the show down, rather they helped create a experience with the artist, similar to what you might get in a more intimate show. Similarly, she also personally helped with at her own merch booth after the show, something I think would be unthinkable for many pop stars of her stature.  After the show, her opening acts could be seen moving around the casino and interacting with the guests in a more casual manner. There were no screaming fans, but there was also a much thinner barrier between entertainer and audience.

There were a few minor technical glitches, and she navigated all of these without losing form or tone. Mystic Lake has a pretty nice video monitor set-up, so even when she was performing to the other side of the room, you could watch her moves in detail on the big screen. Hồng Ngọc was an expert at playing to all parts of the room and keeping it interesting for the cameras. She’s been performing all her life and all that experience was on brilliant display at Mystic Lake.