UPDATE Nov. 29, 2011: A video of Dr. Axworthy’s talk is accessible here. (It will take a short while to load as it is a long presentation.)

Of course, it’s impossible. (This post is well over twice those 700 words, but divided into two parts.)

I’d like to share at least the main takeaway points I caught in a very fulfilling afternoon with Canadian Dr. Lloyd Axworthy, speaking to a good crowd at the University of Minnesota Law School, and a later dinner involving Dr. Axworthy and more than 30 of us (many of whom were high school students). At the end of this post see more under “More of Dr. Axworthy’s Wisdom”.

The program descriptor spoke for itself: “the Hon. Lloyd Axworthy, is a former Foreign Minister of Canada and a former Canadian Representative to the United Nations, serving twice as President of the UN Security Council. He served 21 years in the Canadian Parliament and has held seven different cabinet posts in the Canadian government. Currently, he is President of the University of Winnipeg. He has gained distinction for his advocacy for the International Criminal Court, the Responsibility to Protect principle, and the abolition of land mines for which he was nominated for a Nobel Peace Prize. He holds honorary doctorates from twelve universities. His book, Navigating a New World – Canada’s Global Future, was published in 2003.” 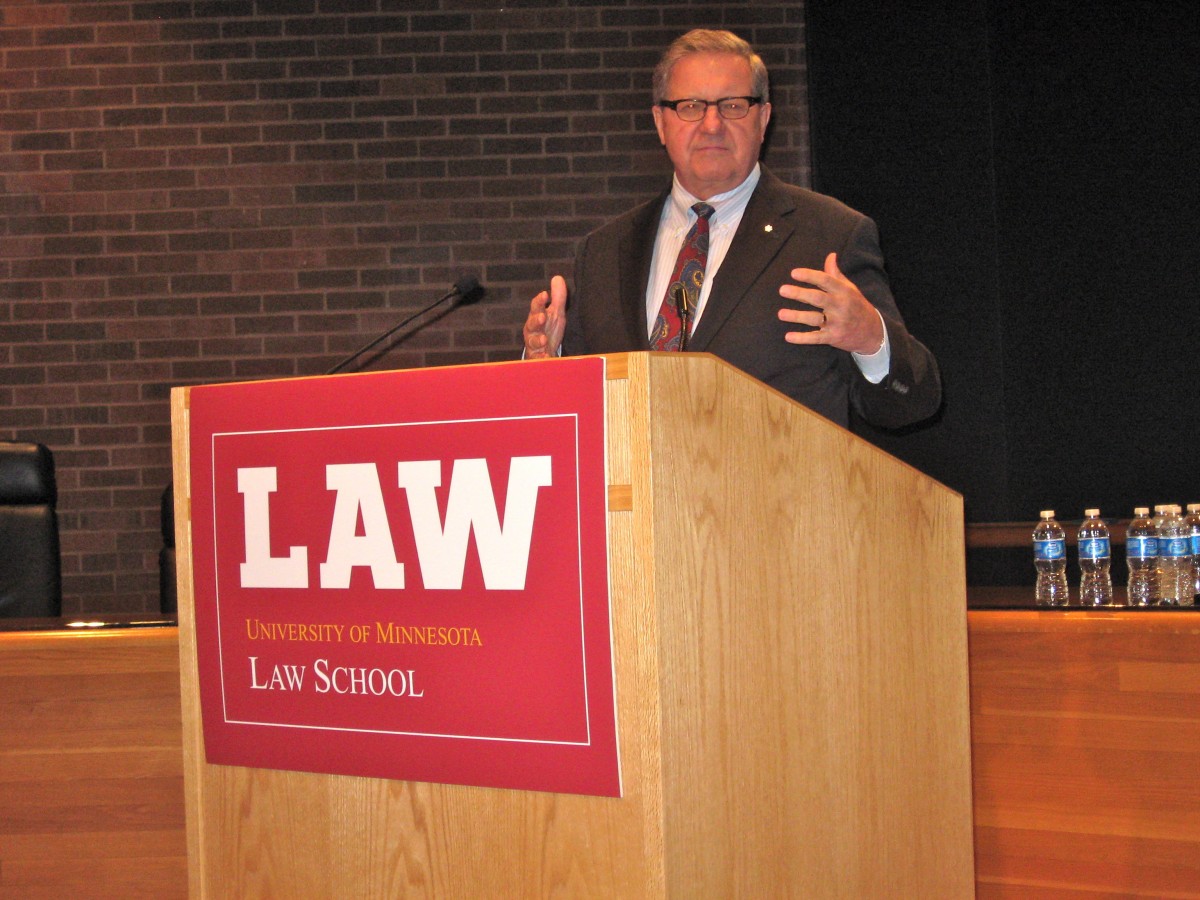 In his extensive public service, Dr. Axworthy saw much of the promise and peril of our contemporary national and global society, and saw much of that up close and personal as an envoy. Words like Rwanda, Congo, Bosnia, Kosovo, Eritrea, Ethiopia and such were not exotic abstractions to him. He had, as the saying goes, “been there, done that”. What seems easy is rarely if ever so….

My takeaway from the gatherings yesterday is that it is easy for folks like us to sit around in a coffee shop, or in an affinity group, and figure out all of the world’s problems – or at least the problems we have identified as most important. These days, for most of us it seems, the world revolves around our own particular thing, our own ‘truth’, from the profound to the trivial. We put leaders in impossible quandaries. In a complex society and world, there are no easy answers.

It is essential to have the big picture folks like Dr. Axworthy around, the visionary and diplomatic ones who can identify problems and work towards long-term solutions under oft-times impossible appearing circumstances. I’ve been around people like Dr. Axworthy before, and they always inspire awe. They truly are ‘been there and done that’ folks, at home with seemingly impossible situations while the rest of us, like me, can muse about how things ought to be.

Things do look simple when all you have to consider is your single issue, and debate its merits only among others who agree with you, using your own data as proof.

Who we elect as leaders is extremely important – it is not a task to be taken lightly. Then, once elected, the leaders task is not “light”.

After dinner, I posed a question about the current generation gap (at the dinner, many of us were high school students), and one comment Dr. Axworthy made stuck with me: essentially, in my day, and his (we seem to be almost exactly the same age) you were dependent on the book and the 50 minute lecture from somebody; in the contemporary generation, in seconds google will come up with a great number of items of apparently related information for the student…but the devil is truly in discerning which of these sources might be reasonably credible and which might be demonstrably false. This is a dilemma of the current age. We can deliberately fool ourselves by accepting only the truth that we believe; in the end analysis, we’ll be the fools if married to that notion of ‘truth’. Facts have a nasty way of coming home to roost.

The Canadian Consul-General to the Twin Cities, Martin Loken, also attended the evening meeting and addressed some current issues, particularly the rapid melting of the Arctic ice cap, the very serious implications of global climate change on the lives of indigenous peoples of the north, and the increasing potential for issues regarding ownership of the resources below the sea; even the implications of northern ports as they will ultimately relate to Minnesota and the Midwest.

As the Arctic opens year round – a consequence of global warming – one of the many outcomes will be the potential reality of a sea-to-sea corridor north to south through the American Midwest. The debate on the implications of this is already beginning. Take a look, sometime, at a globe, with the Arctic in the center of your view. View it without ice. See which countries border on it. Here is one such view, well worth the time to really internalize. It upends our traditional view of east and west. It is a view of the future.

Things like the Law of the Sea, which the U.S. has not yet ratified, will play a larger and larger role. We were urged to pay attention to this. Most countries have ratified the Law of the Sea, and those who have come to agreement are in a better position in upcoming negotiations over the status of the Arctic and other sea issues in this time of improved technology.

A link to a Will Steger program co-sponsored by the Canadians on the changing Arctic is worth a look, here. 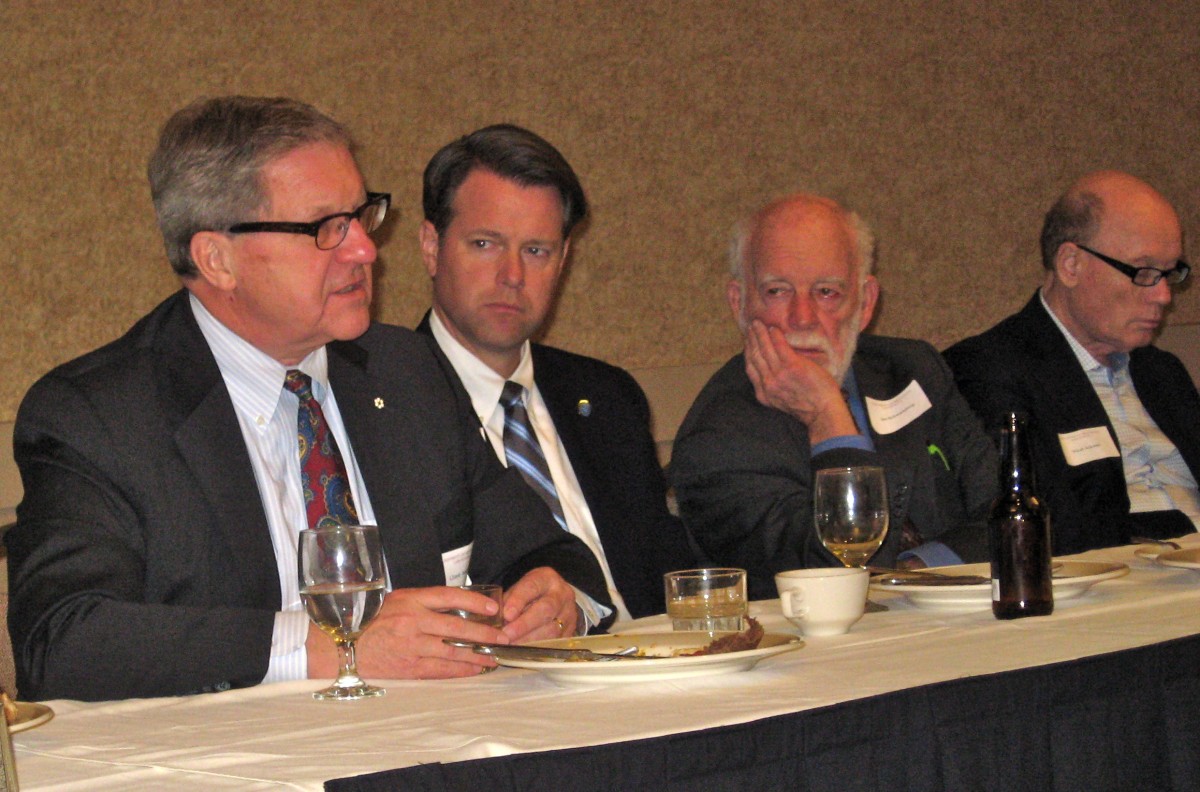 MORE OF DR. AXWORTHY’S WISDOM based on a few notes I took at his talks. My apologies in advance for any unintentional misinterpretations of his thoughts.

1. A good line about being a University President: “there are a lot of people under us, but nobody listens”. He also noted that Canadians likely think many times more often about developments in America, than Americans think about Canada. My thought on his: of course, these were both flashes of his abundant humor, but so true…in too many instances we own the leaders, who we elect after all, and thus can de-select for good or not-so-good reasons, but in America’s case, we have created a system that simply does not work, especially in the current day. What we do – or don’t do – has serious implications across our borders. On the latter note, simply from conversations with my Canadian cousins, two of whom are dual citizens, we – and they – have a great deal to gain from a positive relationship with our near north neighbor. Similarly we have a great deal to gain from other neighbors, near and far. But our notion of American exceptionalism gets in the way of our comment sense.

2. Dr. Axworthy mentioned several times Susan Sonntag’s book “Regarding the Pain of Others”. I’m going to check this book out.

3. “You can turn off the computer, but you can’t turn off the reality” and related comments on the importance of ideas: you need to believe in something you want to do. I picked up the notion that Dr. Axworthy saw great power in networks and coalitions, and that this power is potentially enhanced by the internet. He and several other Canadians became politically powerful and in his case he learned a great deal from door knocking when running for office…”you learn a great deal from the stories behind the doors”…. He reminded me of my great friend, Elmer L. Andersen, Minnesota legislator and Governor in the 1950s era. Andersen was already a well-to-do businessman, but he was also a scratch organizer non-pareil. Andersen loved people, and he reveled in ideas and the interplay of differing points of view. We are now in an American era where political direct and indirect lies are endemic, and personal contact of governed with their elected representatives limited almost entirely to sound bites on television or radio, that we are at risk of losing the very democracy we celebrate. The U.S. Congress has truly abyssmal approval ratings from the public. Unfortunately it truly reflects us.

4. Dr. Axworthy has walked the talk of Responsibility to Protect for years and credited the campaign to end land-mines for its impetus and success. (Relevant links in the 4th paragraph). One-hundred twenty countries have signed the treaty document and the results are clear: a reduction from over 100,000 to 15,000 mines per year. Dr. Axworthy made clear that there is evil in the world. It will never be totally eradicated. But campaigns such as Responsibility to Protect have and can do great things. He suggested a New Law of Humanity as opposed to simply a Law of Nations – where one can’t be a predator of his/her own people; and where there needs to be an effective multi-national force to restore order in occasional chaotic situations.

5. As a powerful politician and a well-seasoned diplomat, Dr. Axworthy made no claims that the UN was or ever will be perfect, or that things such as evil can ever be eliminated. His was a very practical view of making change. Towards the end of his talk he mentioned a new Northern Institute of Social Justice, in the the far north region in the Yukon. He was highly impressed with this program, through which indigenous peoples advocate for their own interests, particularly in the potentially devastating impacts of global climate change on their way of life through new policies of major governments, global business, etc. I have seen other examples of the effectiveness of local advocacy despite overwhelming odds. The success is in the public engagement through the many means available to all people. Dramatic change often comes slowly, one small step at a time.