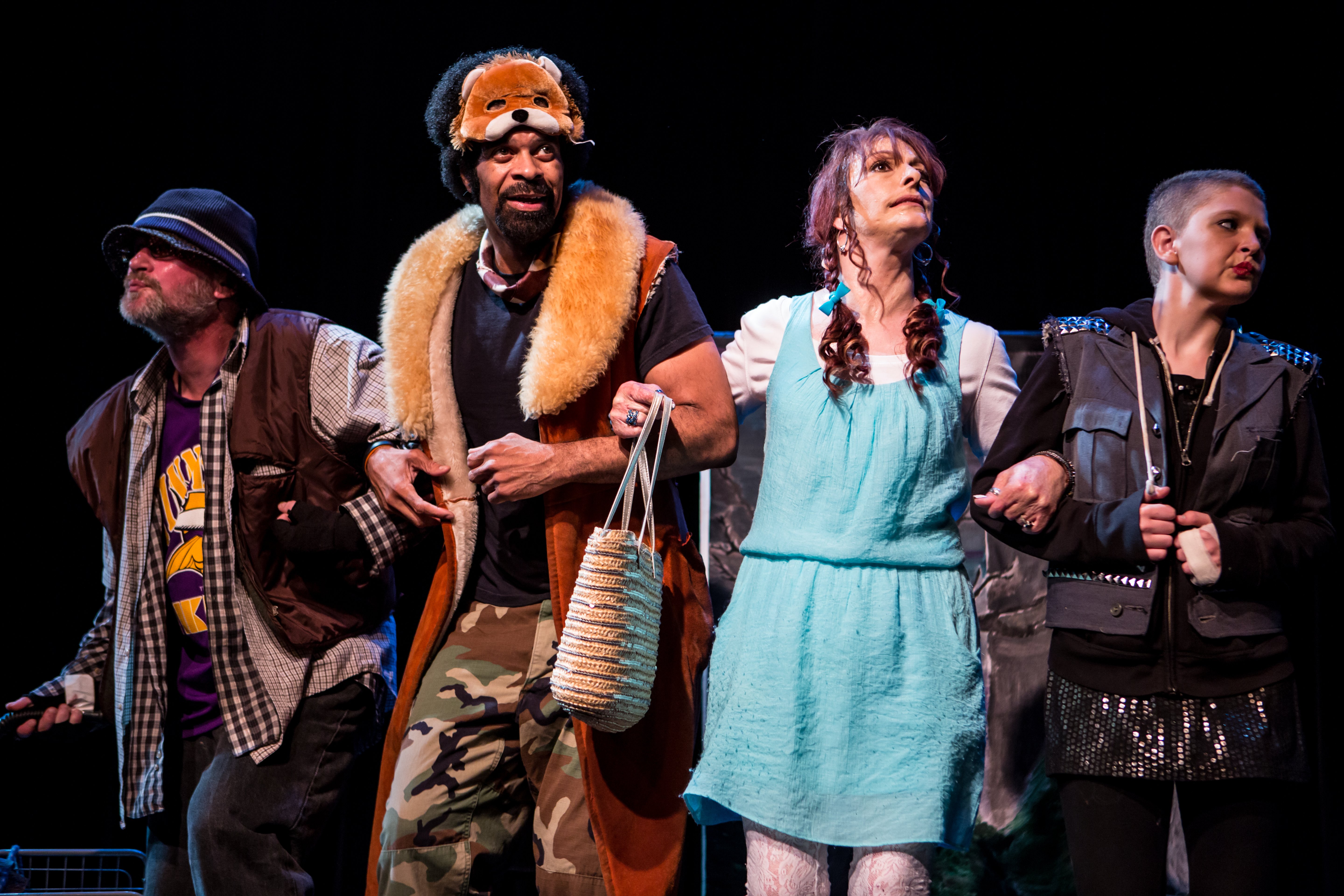 Richard Brinda is the person on the left in this photo. (Photo courtesy of zAmya Theater)

The zAmya Theater Project just celebrated a milestone: its tenth anniversary. Ten years. Ten memorable, heart-breaking, uplifting, hilarious, poignant, raw and real years. zAmya is not your everyday theater, like classic Shakespeare or Dickens put on by the Guthrie, or new pieces by up-and-coming playwrights celebrating global diversity at Mixed Blood, or even those avant-garde dream-like pieces that once captured our hearts and imagination at the Theatre de La Jeune Lune (RIP). As theater with a passion for social justice, zAmya brings together homeless, formerly homeless, and housed people who transform into actors in a community-based theater.

zAmya’s mission is to change minds about everything we think we knew about homelessness: who becomes homeless, why, and how. But they don’t stop there. They have audience members wriggling in their seats feeling uncomfortable with tears running down faces from laughter. They actually make it okay to find humor in the everyday comedy of human interaction.

The messages in each show are so compelling that it’s easy to overlook the amateur production. The process of writing and producing zAmya’s annual show is a collaborative effort. Theater troupe member Richard Brinda, who has been part of the last four shows, said that when helping to come up with the new show each year, he does lots of interviews and active listening. He himself was formerly homeless, but recognizes his isn’t the only story to tell. He wants to incorporate what he hears on the bus and in shelters from other people who allow their experiences to be shared. He also noted that the theme they capture each year often reflects current events such as the Occupy Movement, or natural disasters such as typhoons or tornadoes that destroy communities and homes.

This year marks the seventh year for troupe member Arminta Wilson. She relocated to Minneapolis from Chicago after her husband died. Wilson was living in a local Salvation Army while taking classes towards a degree in human services and theater at the Minneapolis Community and Technical College when zAmya visited the shelter to do a workshop. She was taken with the approach and mission and decided to get involved right there on the spot.

Seven years later, Wilson thinks the theater has much more work to do. “zAmya signifies the story of real lives. It features the conditions of homelessness,” she said. “In our time so far we’ve only just staged a few scenarios. There’s more to share to signify the lives and conditions that homelessness impacts.” 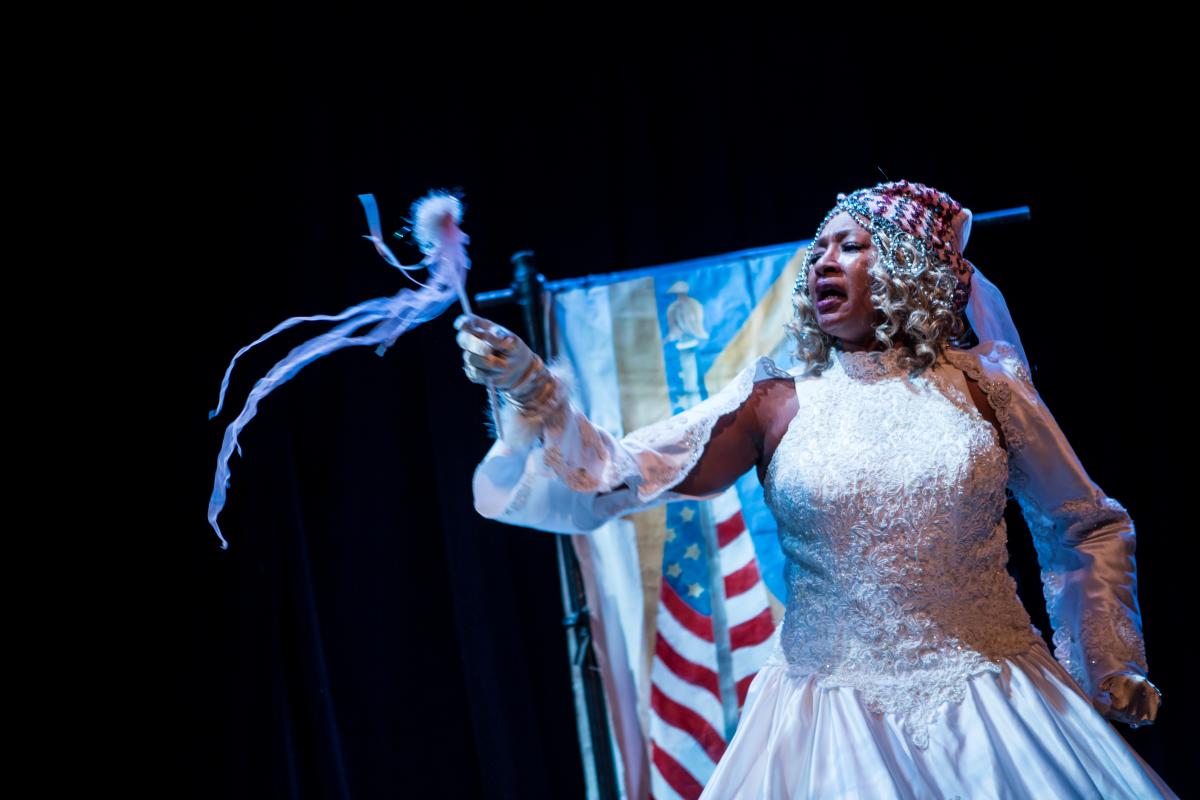 Other members of the theater troupe stood up to speak about memorable moments of their involvement when St. Stephen’s Human Services hosted a celebratory event for zAmya on Wednesday, November 20. Most remarked on feeling immediately drawn to the material and the overall project as if something beyond their control was pulling them towards the work. Richard Brinda noted the challenge of memorizing lines that might change the morning of a performance, but that being involved in the work was healing. “zAmya is a space to let feelings out instead of bottling them up. It’s also a community that looks out for one another.”

zAmya, meaning “aiming for peace” in ancient Sanskrit, was the brainchild of Lecia Grossman who needed to come up with an assignment for a leadership program she was involved in to become a life coach. Participants had to make a pitch to their cohort on something they’d be willing to die for. It needed to be a compelling 15-minute presentation at the end of a year-long exploration.

Monica Nilsson, then with The Bridge for Youth and one of Grossman’s local mentors, called on her to commit to something that would be sustainable, and said that if she worked with a highly mobile community in Minneapolis, she would have to show up—long-term. Scared at the prospect, Grossman still recalls not wanting to do something for, but rather with community. She had no acting experience and confessed she didn’t know much about the systemic issues underlying homelessness at the time, so she set out to secure knowledge and experience with a core motivation of combining this art medium with dignity and respect. With the help of well-known theater folks from the area including Joe Evans, who has also done work with the Los Angeles Poverty Department, and Maren Ward, a co-founder of Bedlam Theater, she was up and running. That was in 2003.

Since 2009, the zAmya Theater Project has been a program of St. Stephen’s Human Services. Monica Nilsson, now Director of Community Engagement at St. Stephen’s, oversees the project she encouraged from the start. St. Stephen’s has a mission to end homelessness through programming that includes housing opportunities, employment support, emergency services and outreach, and systems change. St. Stephen’s provides logistical support to people experiencing homelessness, and zAmya is a creative outlet for individuals working through the process.

Currently, the group is working to secure a grant for collaboration with the Minneapolis Downtown Council’s Intersections 2025 to conduct theater workshops with people who work, play, worship, and live downtown. The goal is to bring those who have and haven’t experienced homelessness together to create a new theater piece to share in spring 2014.

Lecia Grossman explains that the process is the important part—even more so than the final product. “We depend on one another for a sense of value, and there is much to learn from people who experience homelessness—their adaptive capacity and creativity for one.”

If you haven’t been to one of their performances, it’s time to add attendance to your to-do list for the New Year, and every subsequent year thereafter. Take ten minutes to celebrate the tenth anniversary by watching this video of vignettes from various shows from across the years. And then consider inviting zAmya to your local school, church, or community center to perform.

Happy Birthday, zAmya! Congratulations to everyone who has played a role in bringing music, humor, and heart to these sensitive issues.