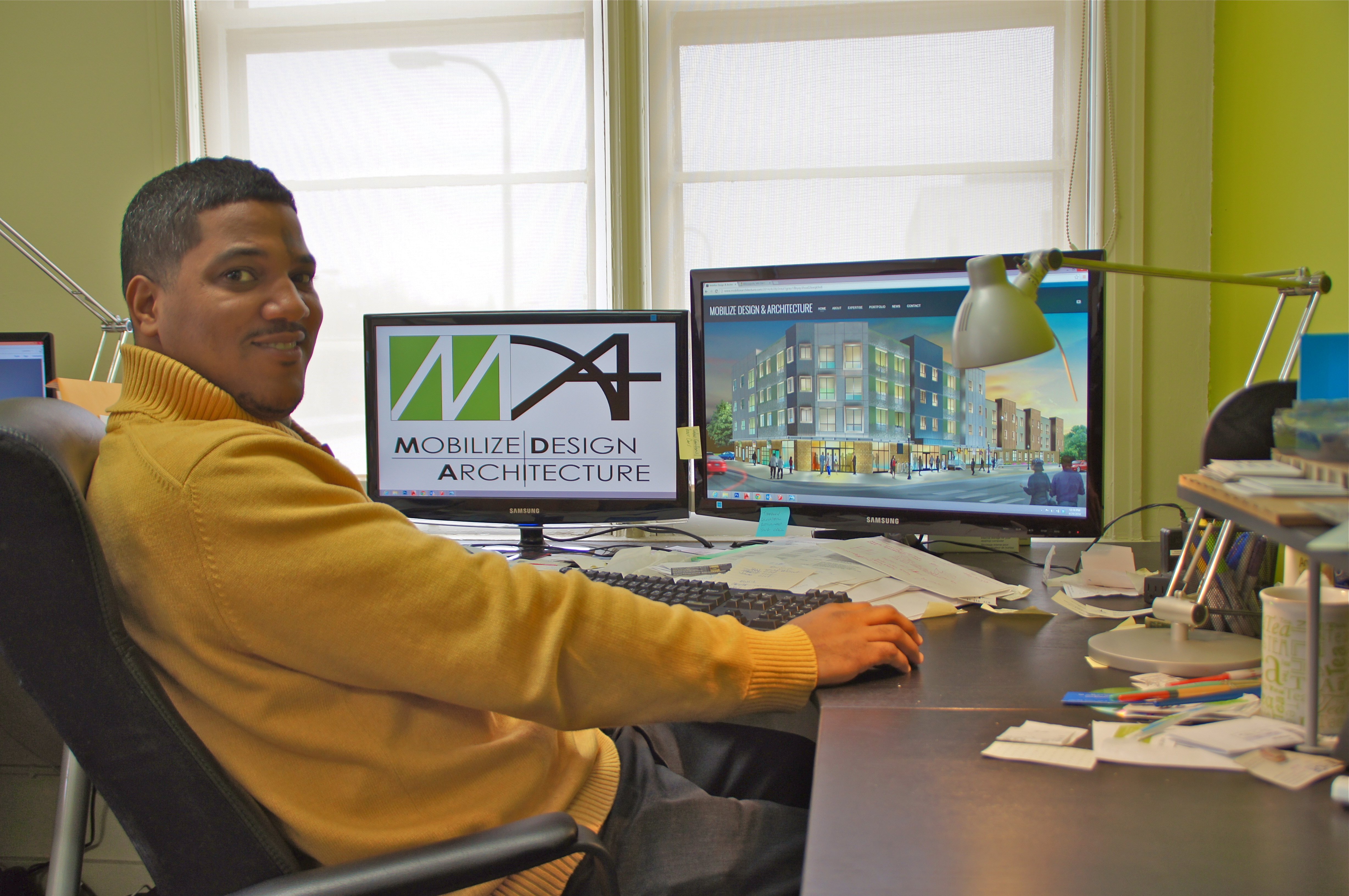 Jamil Ford, president of Mobilize Design and Architecture at his desk. An artist's rendering of The Commons @ Penn Avenue is displayed on the screen

Jamil Ford lives and works in North Minneapolis. His relationship goes far beyond that though; he believes that his business, Mobilize Design Architecture, is an important part of creating a prosperous, dynamic and safe community there. His passion is to design beautiful and accessible buildings and housing at busy, blighted or crime-ridden intersections to spur economic development. Prosperity, security and pride, he believes, will follow.

Ford is one of those rare guys who had his path mapped out in the 8th grade. He was the kid who was corralling friends to haul logs, lumber and railroad ties to build the clubhouse he designed. He would see cranes building skyscrapers downtown, and he’d start sketching. Fortunately, North High School offered a four-year Architecture and Engineering program focused on residential drafting, designing & building a solar boat. “My parents pushed me to have big dreams and I knew architecture was it,” he said. His first completed formal project was a solar boat that was entered into a statewide tournament, and he was hooked.

Two of the more high-profile projects Mobilize has recently taken on designing an airy and artistic Hennepin County Human Services hub on Plymouth Avenue, and the Commons at Penn Avenue, at the corner of Penn and Golden Valley Road. This project is taking a blighted corner known for crime and vagrancy and turning it into commercial space topped with a 45-unit affordable apartment project. It was another man dreaming of a stronger North Minneapolis who pushed that project: former pro basketball player and Ford’s childhood friend, Devean George. Construction will begin later this summer.

Recognizing the early modeling and apprenticeship programs he was involved with that shaped the kind of man and architect he is today, Ford pays it forward. The Mobilize office is located on West Broadway in a building recognizable by its funky mural façade and tenants who are creative and community-focused. One neighbor is Juxtaposition Arts, a nonprofit that pairs driven, talented youth with professionals to learn such skills as production, marketing skills and architectural design. Ford and his partner David Witt are mentors to Juxtaposition’s young aspiring architects/designers. They have an open door policy and have even allowed these students to design features on some of their projects.

Ford’s first connection with NDC came in 2010 via NEON, Northside Economic and Opportunity Network that helped them get off the ground. NEON Executive Director Grover Jones provided support and made connections with potential clients, but also kept pushing Ford forward, encouraging him to make a difference in his hometown.

Ford took NDC’s Plan It! Entrepreneur Training program in 2012 through NEON, where he graduated with a business plan and greater marketing skills. One takeaway Ford got from that class was the value of building community and of creating future jobs through Mobilize. NDC was also able to provide Ford with a loan when it was needed most. He used it to cover the cost of computers and insurance. And true to form, Ford wants to help NDC. He’s offered his services to consult with entrepreneurs to decipher zoning and city codes or façade projects.

“The name Mobilize comes from the idea of mobilizing people through architecture and design… mobilize a community that’s been set back for many years. If we can begin to transition North Minneapolis, the city of Minneapolis as a whole will be a much better place, Ford said. “We want to drive that.”

Ford recognizes that fine architecture alone won’t ignite the needed changes in North Minneapolis, but it can be the agent that inspires energy and commitment in its residents: “Buildings don’t change communities, people change communities; MDA is a part of the change that our community needs; our presence, our commitment & our passion is here for the long haul.”