Winners of the “Homegrown Heroes” awards for 2014

“Unity will come to local farming, and prosperity will come to the local economy” Minneapolis Mayor Betsy Hodges said in her remarks at the Third Annual Homegrown Minneapolis Open House last Wednesday. The mayor added that “the thoughtfulness and consideration of all of you here helps make sure that everyone can do better, now and in the future.”

Council member Gordon noted that “There has been a breakthrough in how we see the culture of food production and distribution, and we now have bureaucrats and activists sitting down together to help formulate food policy.”

Council member Frey said there are over 700 empty residential parcels in the city and “even after accounting for sales for revenue, there are many potential new community gardens waiting to be utilized.”

The event was made possible by more than thirty sponsors and partners, including City Departments, and fifteen local organizations which had information tables in the hall, ranging from Youth Farm, a Twin Cities youth-leadership organization serving over 800 young people who cultivate local public gardens and sell their produce, to The Beez Kneezs, a collective for local “hive partners,” bee education (apiology) and honey production.

Homegrown Minneapolis, and its board, the Homegrown Minneapolis Food Council, are part of the City’s Sustainability Office. It was formed in 2009 as part of a citywide initiative to prompte urban agriculture, healthier food at local stores, resources for food businesses, and education for nutrition and food safety.

October 2014, the City Council approved changes to the 2008 Staple Foods Ordinance. These changes will increase the amount of healthy foods available in grocery stores. The changes expand required staple food categories and set minimum quantities. Some stores would be exempt.

Minneapolis is the only city in the U.S. to have staple food standards for licensed grocery stores.

Daniel Klein, chef and filmmaker for The Perennial Plate, screened clips from two of the fifty-two short films he and his co-producer Mirra shot in Minnesota in 2010/2011. One clip featured Andrew and Khaiti French, a couple who met at the Seward Co-op, married, and bought a farm in West Central Wisconsin to raise and humanely slaughter livestock and cultivate organic produce.

A second clip portrayed the Lee family, originally from Laos, who operate an organic vegetable farm supplying produce for farmers markets. Klein suggested that the difference between the two might be that the first suggests “culture as farming,” where the second shows that “culture is farming.” Both clips will be part of PBS’ “Victory Garden Edible Feast,” to be aired in January.

Winners of the “Homegrown Heroes” awards for 2014 were (in photo at top):

Capi-USA: An organization for immigrant outreach has marshaled over 200 Hmong residents to help found and maintain community gardens in South Minneapolis.

Ousman Camara: Owner of K’s Grocery in North Minneapolis, who was one of first to add large amounts of fresh produce to his inventory as part of the Healthy Corner Stores initiative. 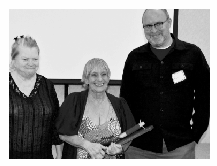 Adam Kay, Chip Small and students: University of St. Thomas professors and their students doing extensive research on the biology of composting.