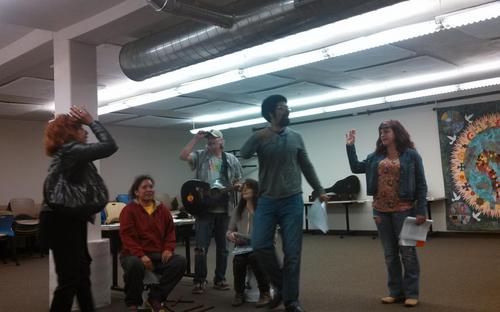 It’s a show of the people for the people. And it’s free. So there’s no excuse not to go and every reason to make the effort to see it; I know because I was able to catch part of a rehearsal last week.

Home Street Home Minneapolis is a play about the day in the life of downtown Minneapolis through the eyes of tour guide and street musician Zeke Cooper and the people he encounters. Director Maren Ward (from Bedlam Theatre) has led the troupe, many of whom have experienced homelessness themselves, through the process of writing and performing the show. They interviewed people who spend time in Minneapolis and drew from personal experiences to create vignettes from daily downtown life. The play will be staged in various popular places in downtown throughout the week.

The first reason to make the show? The voices! The show is musical. Tour guide, Zeke (performed by Richard Brinda) has a Minnesota-Bob-Dylanesque voice and pleasant demeanor. But it was the gorgeous, booming voice of the mayor (performed by Arminta Wilson) that knocked my socks off.

The show addresses some tough subjects thoughtfully, sometimes with humor, sometimes not. As Monica Nilsson, Director of Community Engagement says, “it’s an inspiring look at the resilience in the face of hard times.” The stories off the stage are as moving as the ones on stage. While I was there at least one performer needed to get a signed note to use when she returned to the shelter. That note was her reservation confirmation and meant a bed would be waiting for her. The night I visited was cold and sleety. They practice a few hours a night, a few nights a week. It’s the kind of thing most of us are hesitant to commit to doing, especially during a long harsh winter – yet here are actors with much greater concerns than many of us have signing on and showing up. That is inspiring!

The third reason to make the show? It’s the start of a conversation that needs to happen if we are going to consider a more livable Twin Cities. The mission at St. Stephen’s is to end homelessness. They provide emergency services and shelter to people experiencing homelessness and poverty – but they also strive end long term homelessness through education and support. The theater company fulfills part of the education mission; the goal of this show is to provide a chance for people who “live, work and pray” downtown to learn more about homelessness. They are also beginning a monthly brown bag conversation on homelessness downtown at New Century Theater in City Center. The first session is May 6 over lunch (11:30-1pm); attendees are welcome to come and go anytime.

“You can’t call someplace livable until everyone has a home.” A simple yet astute observation from one of the characters from Home Street Home Minneapolis, a production by zAmya Theater, a program of St. Stephen’s Human Services.