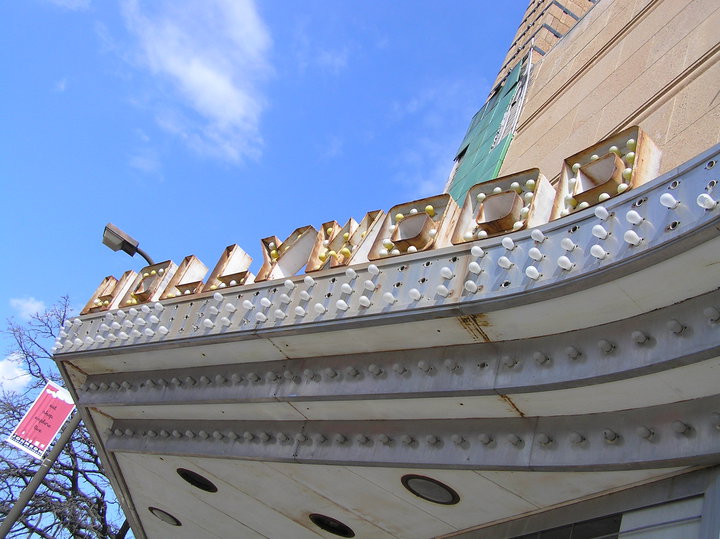 Ask any Northeaster of a certain age and you’ll hear a story—a first date, the lush décor, the classic movie featuring the glamorous stars of another day. Ask a 21st century newcomer and you’ll hear a story of a rundown eyesore covered with tattered placards.  Ask a preservationist and you’ll learn just why the Hollywood is an architectural treasure of historic import.  There are clear differences of memory—and opinion—surrounding the Hollywood Theater, 2815 Johnson Northeast in Minneapolis.

Check it all out for yourself at Johnstock , the annual celebration of Northeast marchants, artists, and family fun. On Saturday, June 2, from 1:00-5:00 p.m. visitors can tour the theater, inhale the history, and catch the spirit of preservationists, movie mavens, city planners, and neighbors who cherish and dream of what the Hollywood was and could be.

In its glory, the Hollywood, opened in 1935,  was a stunning theater with 1,000 cushy seats where movie buffs reveled in cinema classics. Passersby could only imagine the possibilities suggested by the soaring vertical sign that and unadorned Kasota stone exterior that mark the theater today. Set in a residential neighborhood rather than downtown, the theater unfortunately lacked the financial support afforded the competition.

Thus began a new era in the history of the Hollywood, an era marked by community pressure for re-use possibilities and political concerns about the cost and feasibility of renovation—a turbulent time still fresh in the minds of many Northeasters, preservationists, and film lovers.

The elegant architecture, known as Streamline Deco design, is the hallmark of the Hollywood, the feature that in 1990 persuaded the Minneapolis Heritage Preservation Commission to designate both the exterior and the interior for Heritage Preservation. The designation led to a decision by the Minneapolis Community Development Agency to purchase the Hollywood from a private developer in 1993.

Fast-forward two decades. Today the City of Minneapolis owns the Hollywood Theater. In an effort to support redevelopment of the theater the city purchased the property adjacent in 2008 with the intent that additional space would facilitate development of the theater by providing parking, service access, or related development. Asking price for the set is $275,000.  By any standard, the Hollywood is a fixer-upper with City Council and staff oversight of the buyer’s intended development and adherence to preservation guidelines.  There’s an RFP online.

Though the theater remains closed, the legend and the possibilities are alive.

And where there is life there is hope.  For example, last November Savage Umbrella breathed life into the Hollywood with a production of The Ravagers. Next month, on the evening of June 23, The Unsettled Foundation  will “bring storytelling to the semi-abandoned and possibly fully haunted Hollywood Theatre.”

Best of all, the Hollywood will share its charms with visitors to Johnstock.  On Saturday, June 2, the doors will open for prospective tenants—and the curious public—to explore the grandeur of this neighborhood and architectural gem. Free and open to all.

Visitors are welcome to explore the Hollywood with fresh eyes—to see the beauty of the stone exterior and the impressive “Hollywood” sign and then to step inside to experience the history and imagine the possibilities of this classic treasure.