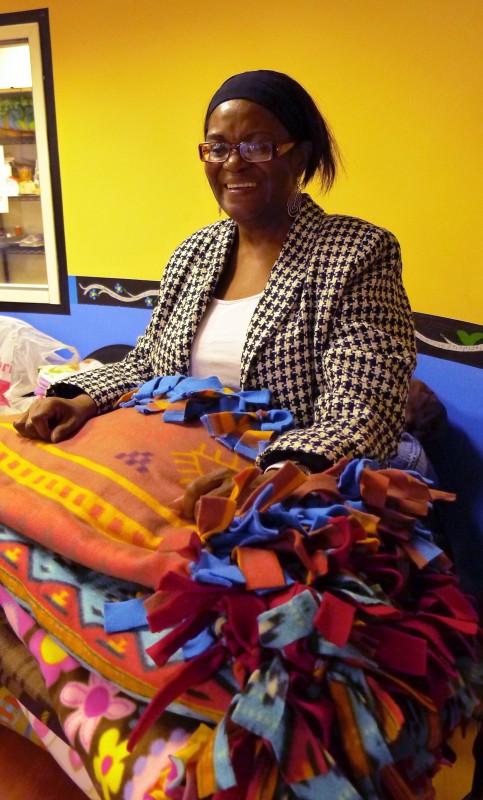 “Everybody deserves to have something for the holiday,” says Tonda Daggs.

On Wednesday, December 14, volunteers will prepare and serve a meal for approximately 90 women, many of whom have a decade or more of memories of having nowhere to go — not just for the holidays, but on a daily basis.

For more than a month now, Daggs and a group of dedicated volunteers have been making no-sew fleece blankets and jewelry to present as holiday gifts to women who have experienced long-term homelessness. They are looking for support from the community as well.

Over 10 years ago, Daggs was diagnosed as bipolar. As a way to deal with her mental health condition, she self-medicated and as a result became chemically dependent. Knowing that she wanted a different life, she went into treatment. She has now been drug-free for six years.

“People that I didn’t even know helped me. They believed in me and they stuck by me, and I just wanted to give it back,” Daggs says. She is now a peer support specialist for Women’s Housing Partnership (WHP).

WHP began in 2008 when Simpson Housing Services considered closing their women’s shelter. Affordable housing opportunities was just one of many services they wanted to offer women in the community, so collaborating with Spectrum Community Health they applied for and were awarded a four-year federal grant.

Paula Drain has been a participant in the program since 2009. In the mid-’90s, she got laid off from work and took odd jobs to try and make ends meet, but in 1996 when her daughter was killed, she says she went “wild.” What started with drinking heavily and using drugs led to 12 years of homelessness. 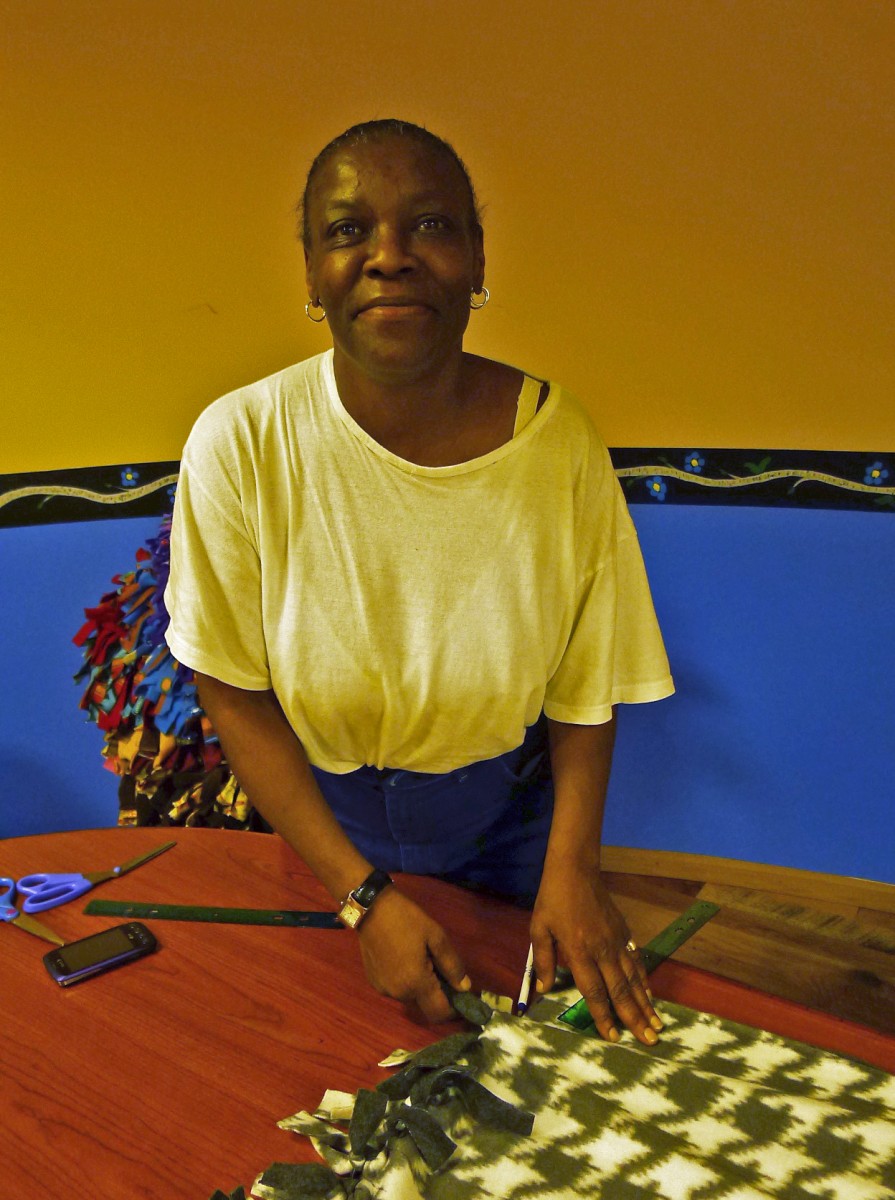 “It’s not a good sight,” Drain says about learning to live homeless. “[Before you’re homeless] you’re saying, ‘Well, why they out here?’ And then you are out there, and then you see why.”

Many women become homeless on the heels of a traumatic experience after which they use drugs or alcohol as a coping device. “I used to sleep outside in the summertime all the time,” Drain explains.

“A bunch of us ladies would be hanging out, and we’d sleep outside. But when it would get cold we would break our necks to find a place to get in so we wouldn’t be in the cold.” During the winter months there is often limited access to beds in overcrowded shelters.

Cara Miller brings her skills and interest in social work to her position of program coordinator at WHP. She explains that women are generally referred to them through shelters, street-outreach workers and therapists. For WHP to offer women affordable one-bedroom apartments, they must meet strict eligibility requirements for the federal definition of long-term homelessness 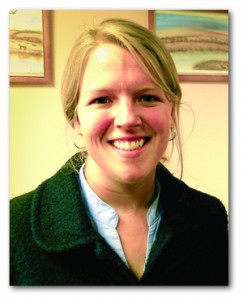 The program’s main goal is to help women determine what they want from life. This might include recognizing and addressing mental health issues, learning ways to socialize that do not involve substance use or abuse, going back to school or rebuilding damaged relationships with family members.

Miller says that most of the women in the program are in their late 40s to early 50s. Thirty-five percent are Native American, 40 percent are African American, and 20 percent are Caucasian with a small percentage of multiracial women.

A mental health diagnosis is required for program eligibility, and since women must focus on their own healing process, they cannot be in charge of raising a minor child. Approximately 70 percent of the women are also dealing with chemical dependency.

Most of the women in the WHP program have lived through homelessness and/or living in a shelter for close to or more than a decade. Miller says that she recently had a conversation with a participant who has been homeless since she was kicked out of her parent’s home. That was 25 years ago.

After years of learning how to avoid the life-threatening challenges that homelessness brings, such as frostbite and physical assault, Drain says many people simply become attached to a homeless lifestyle.

“Some people don’t like being closed in,” she explains. “It’s the way they’ve been dealing with life, I guess. They got tired of people telling them, ‘You can’t do this, you can’t do that.’”

Most shelters have a curfew, some as early as seven in the evening. “That’s why a lot of people are like, ‘Forget that — I’m grown,’” Drain says. “‘How are you gonna tell me I got to be in at seven?’ And if you ain’t in at seven, you lose your bed.”

Drain says that at one time she didn’t want to adhere to rules, so she understands why her friends remain homeless. What changed for her?

“I got tired of sleeping outside, for one,” she says laughing. “The cold — if you got to get up to go to the bathroom, you got to go find a bathroom.” Besides her health beginning to suffer, it also bothered her that her children knew that at night she was sleeping outside and were worried that something would happen to her.

Asked if her children offered her a place to stay, she laughs and says, “Oooh, I can’t do that. I done had them, I done raised them, I don’t want to live with them! That means I have to go by their rules — can’t do that one.” She has, however, spent an occasional night with her sister or with friends.

Support services for Drain include weekly visits at her apartments to determine how she is taking care of herself and to find resources for any problems she may be experiencing. Ten to 20 years is a long time to experience something as major as homelessness, so there is no timeframe for completion of the program and women can receive services for as long as needed.

Material possessions are almost nonexistent for women just beginning the program. What few they have often fit in a laundry basket.

“Material possessions are so appreciated because they symbolize a lot for people,” Miller says. “They symbolize having achieved something, and a success and stability that for the bulk of their adult lives they never experienced.”

“Living with people is fine, but sometimes you just want your own,” Drain says. “I wanted my own, so I’m like, well, I got to get up and start doing what I need to do to get my own.”

Daggs says the women enjoy monthly bingo games. Prizes include household items such as laundry detergent, dishtowels, shampoos, conditioners, body wash and even Ramen noodles. Though the program’s focus now is gathering donations for the upcoming holiday party, year-round donations of all kinds are welcome.

“Gift cards to eat a meal somewhere that’s not a shelter [or] a gift certificate to get their nails done” are Miller’s suggested donations.

Drain advocates for the program to homeless friends she still maintains contact with through shelters and places that provide free hot meals. One friend is currently working on getting into the program. “She’s at a shelter now… I told her, ‘Hang in there. Don’t give up. Things will get better.’”