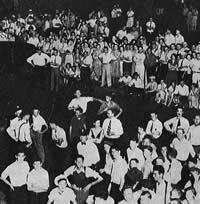 In 1931, postal worker and World War I veteran Arthur Lee moved into a new home in south Minneapolis at 4600 Columbus Ave. — where he, his wife Edith and six-year-old daughter Mary faced crowds as large as 4,000 people protesting violently to the presence of the young black family in what had been an all-white neighborhood.

The Lees did not face this ordeal alone, however: Arthur Lee’s fellow workers from the post office, joined by fellow World War I vets, came to the Lee home to stand guard to protect the family from the mobs outside.

In 2011, this story gained wider attention when the community organized an event commemorating the 80th anniversary of the protests and erected a plaque at the site of the Lees’ former home.

Now the Lees’ story is the subject of a historical exhibit, “A Right to Establish a Home,” which will be presented at the University of Minnesota in the HGA Gallery at Rapson Hall, 89 Church St. SE, Minneapolis.

The exhibition interprets the protests and responses in the broader context of race and housing in Minneapolis, racism in Minnesota, and the individuals and organizations that defended the Lees.

For more on the Lee family’s experience, see the July 2011 story from the Labor Review: www.minneapolisunions.org/mlr2011-7-29_lee_family.php.