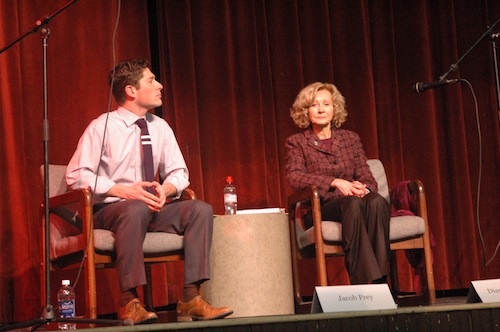 The Third Ward is one of the most disparate wards in the city, particularly after the new re-districting, which added the North Loop, Mill City, Downtown East and Downtown West into the mix. Somehow, the councilperson overseeing the ward has to juggle the needs of downtown with parts of North Minneapolis and Dinkytown. As my friend Chris Stellar put it, “It’s such a non-uniform ward, no end of it connects meaningfully with another. It seems like Yugoslavia or something.”

Diane Hofstede has been on the council for eight years, and prior to that she spent 20 years on the library board, and later as a library trustee, where she was instrumental in getting the downtown library built as well as Pierre Bottineau Library. She’s been a teacher at North High School and at Northeast Junior High, and was a curriculum writer for Minneapolis Public Schools, and also was a financial advisor. As a council member, she cites as her accomplishments being instrumental in improvements in Southeast Minneapolis, the Dinkytown Strategy and the Northeast Riverfront entertainment safety strategy.  “I’ve added 1,000 new units of housing,” she said, “and helped save the historic A Mill.” She considers herself a champion of the Mississippi Riverfront.

She’s challenged by Jacob Frey, a young lawyer at Halunen & Associates, who organized the Big Gay Race, to raise $300,000 to defeat the marriage amendment last fall. His pro-bono work has included helping North Minneapolis tornado victims, working with Somali women on health and empowerment and organizing around mandatory mediation for foreclosure victims. Frey was awarded Minneapolis’s first annual Martin Luther King Community Member Award, which recognizes “achievements in making Minneapolis no place for prejudice.” He also currently serves on the Minneapolis Capital Long Range Improvement Committee and is chair of the PAC for the gun-regulation group Protect Minnesota. In 2007, he finished fourth for Team America in the Pan-Am Marathon in Brazil.

Block E is a new addition to Ward 3, having previously been part of Lisa Goodman’s ward. The troubled development, which opened in 2002 with the help of $38.5 million from taxpayers, has seen a slew of large chain conglomerates close, including the Hard Rock Café, Hooters and an AMC movie theater. Bob Lux and his development firm bought Block E in 2010, and failed to entice the city to allow them to open a casino there.

“I don’t think anybody would argue with me that Block E was a total disaster,” said Frey at the debate on March 21.  His characterization of what happened was that the city got rid of “seedy joints” by “mandating a bunch of sports bars. Anytime you mandate sports bars, they fail.” He criticized the large square footage for each of the units. “The only institutions that can move in are giant conglomerations.”  He suggests decreasing the unit sizes, to allow for more locally owned units to get their “skin in the game.”  Occassionally that might mean some seedy businesses, but the important thing is diversity, he said.

When asked in a follow-up interview whether he would be open to a casino in Block E, Frey said he would need to look at it further. “I don’t care to comment on a particular development project before the proposal is in place,” he said.

Hofstede has good things to say about the current owners. “We have one of the most creative owners that owns Block E,” she said at the debate. The new Hennepin Arts plan, she said, includes development in Block E. Approved by the city council, the Hennepin Avenue Arts plan includes attracting families and teenagers to Hennepin Avenue by adding amenities and a new visitors’ hub that would sell theater rush tickets, and other strategies for connecting institutions such as the Walker Art Center to the river. Hofstede says she wants to make the Block E area of Hennepin “as exciting as the other side of the Third Ward,” she said. “I can hardly wait to get downtown to Block E.”

Both candidates favor more resources devoted to transporation, with Frey laying particular emphasis on streetcars. Streetcars provide benefits that buses do not, Frey said in an interview, because they are lower to the ground — so it’s easier for a disabled individual to roll on and roll off, they’re a smoother ride,  and there are wider aisles, allowing easier access. “But the main point, if you look at the ridership in other cities that have streetcars, it’s far superior to buses or high speed buses,” Frey said. “If we want to encourage public transit, then streetcars are definitely the way to go, not to mention other cities that have put in streetcars have seen one billion dollars worth of investments along those corridors. And the reality is, I think people just think they’re cool. Having streetcars would add to having a dynamic vibrant city.”

At last week’s debate, Hofstede talked about how for her annual neighborhood summit in 2008, she invited all the transportation partners to have a conversation – where they talked about having streets that were pedestrian friendly and other recommendations. She has worked with the mayor on the Central Avenue Trust and Hennepin Avenue transit, and  the possibility of obtaining bus rapid transit or a streetcar. “I fully support that,” she said.

“Many people like the idea of streetcars, and I think that’s a very strong recommendation,” Hofstede said in an interview. “People seem to like streetcars because they’re just different and it attracts a different user, at least that’s what our analysis has demonstrated. The frequency of users increases with streetcars. But I just want to say that’s a very robust transit area and we need to consider making it transit friendly for our pedestrians and bikers as well. And we need to have more bus service. So it’s not as if this one component will solve the issues of transit, it’s really going to be multi types of transit and of course encouraging people to use them including biking and walking.”

Getting rid of the Red Tape

At the debate, Hofstede said there are many more businesses in her ward than when she first started, and that she has welcomed them and advertised them, while at the same time revoking licenses of businesses “that did do what they said they were going to do.” She also touted the work that she and the city have done to simplify regulatory services to work better for businesses.

“The regulatory services was one of the largest departments- so it’s responsible for business licensing and a variety of other initiatives, housing inspections, working with the fire department in their role in inspections,” Hofstede said in an interview. “What we did was we looked at and analyzed what exactly the results were from the various regulatory services components and how we might restructure that to make it more of a seamless function. And so some of the services were moved to the health department, some of them to our planning and development, some of them were kept in regulatory services and so they were moved out depending on how we could create more efficiencies within the department but more effectiveness within our city and how we can really meet the needs of our constituents.”

Frey thinks that the businesses in the Third Ward want change. He wants to create a one-stop shop. “It’s end goal oriented as opposed to specific permit oriented,” he said in an interview. “So in other words, if you want to open up a restaurant, here’s where you go. If you want to open up a boutique and retail, here’s where you go to a different place. And I think that will help make the process more streamlined for a lot of these small, locally owned businesses.”

As Bill Huntzicker reported last week, some stakeholders in the Dinkytown area are concerned with too much development, to the detriment of the neighborhood’s character.

Frey is a proponent of density, but he says, “there are several ways you can keep the feeling of a district while also being a proponent of density.” One is providing set backs on the areas where you are building up. Another “is requiring some of these developers to provide some sort of amenity up front that allows for green space, or a fountain,” he said.

Frey says he’s in favor of a diverse ward, “that means in terms of race and ethnic background and socioeconomic status,” he said. “Affordable throughout the spectrum is important. We have students that are graduating from the University of Minnesota who are incredibly smart, who are upwardly mobile that we have an incentive to retain in our city and in our ward. But here’s the thing. Most of them will not get an $80,000 per year job right out of the blocks, so if we want to retain them, yes, sometimes it’s necessary to give them an option along the way.”

Hofstede also talked about the concern of the rising cost of rent. “I supposed whenever you have a shortage, which we do have, the rents do go up,” she said. “The economy has kept some of the rents not accelerating, as fast as maybe they would have. It’s certainly a concern that we always need to address.” In the Third Ward, there have been a number of affordable housing developments including an in-the-works artist lofts at the Pillsbury A Mill, which includes 250 units of affordable artist housing (at $800 for a studio, according to their website).

As has been noted in various articles, and by several people that I talked to after putting it out on social media that I was working on this article, there’s some concern that Hofstede isn’t very good at answering emails and phone calls. “She’s never returned a single phone call or email ever in history of time,” according to one constitutent/critic.

Hofstede responded to that criticism that “my intent is to respond to everyone within 24 hours,” she said. “That of course assumes that person is at that phone number and responds appropriately as well. It is absolutely my intent, and that’s what we strive to do every single day.” Hofstede does hold an annual neighborhood summit, and facilitates monthly CARE meetings. She’s also developed various work groups to engage community such as the University Avenue NE/SE Traffic Work Group, Move In/ Move Out and a Parking Evaluation Workgroup to evaluate parking needs of Nicollet Island/East Bank neighborhood and has helped formed partnerships such as the University District Alliance, the Stadium Area Advisory Group, the Riverfront Entertainment District and the Southeast Strategic Compliance Team.

As for Frey, he pledged at the debate last week that he would return phone calls within 24 hours, but also pledged to not only facilitate engagement but facilitate resolution by being an advocate for the community. “In some cases you are going to have people annoyed with you, but you have to take a stance,” he said.

CORRECTION: Block E is a new addition to Ward 3, having previously been part of Lisa Goodman’s ward.