The crowd at the bar seems a bit dull, almost disinterested. There’s an NHL hockey game on, but the place is evenly split between those who are silently mesmerized by the sweeping movements across the ice and those who have friends to talk to. And then, with one flick of a stick the puck flies past the goalie and GOAL! – the whole place erupts with the same cat-like reflexes as their heroes on ice. They were paying attention the whole time with eyes that took in everything.

The world of hockey is a bit difficult to understand at times, but one thing is certain – most of the fans are as intense as the players. It’s not just the sheet of ice that makes this a Northern game, born on this continent. Hockey people are tough and loyal, perceptive and quick, but also remarkably decent and civil. 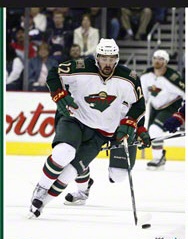 Hockey didn’t come naturally to me, having grown up in a land of perpetual sunshine and a tradition of piracy. It wasn’t until the Minnesota Wild came to the Xcel Center just four blocks from my house that I took any interest in the game at all. I took it all in as a blindingly fast form of soccer, a sport I knew well enough. It was enough to get me started.

Through the decade that the NHL has been in the neighborhood, the Wild have had their ups and downs. This year, with new coach Mike Yeo they lead the league at 18-7-3 and are a lot of fun to watch. There is always an enthusiastic crowd, even for away games, at Tom Reid’s pub – one of the great bars in the neighborhood. Tom is part of the Wild’s radio broadcast team and his place is almost a museum of hockey, full of memorabilia from Tom’s career and the last 50 years of hockey.

It was at Tom Reid’s that I learned what Hockey fans are made of.

One time a big group came in from Chicago to watch the Blackhawks, and not all of them could get tickets. They spent the game at the bar, cheering on their team in an hostile city. Generally, it’s best not to bring up either sports or food with Chicagoans unless you want a tough argument, so you can imagine that a group of them having dinner and watching the game got a little out of hand. By the end of the thrashing their team gave ours pretty much everyone was glaring at this group, ready to buy them all bus fare back down I-94. But once the game was over and the puck was off the ice, it all changed. “Can I buy you a beer?” “This is a great place!” “You guys are the best, I love this town!” Soon, I felt like I had new friends. These were hockey people – friendly and warm until that puck drops.

It’s easy to understand this in terms of the game itself, a full contact sport that requires intense concentration and amazing reflexes. What is less obvious is how much the game and the fans reflect the traditions in this part of the world. What you see in Hockey are all the skills that it takes to survive in a brutal climate that always provides – loyalty, civility, toughness, and watchful eyes that turn adversity into opportunity.

Minnesota, like any place in the USofA, has grown and changed over the years. It’s full of people like me who didn’t grow up in this culture and sometimes aren’t sure quite what to make of it, along technologies that make the winter less brutal. The fights in our Capitol spill over into permanent divides that don’t always make sense outside of a piece of legislation. Suspicion of outsiders grows along social divides, becoming permanent as people forget we are all in this together. The richness of the land is no longer something we share together, but something we grab and hold as if it were our own.

A great way to renew the spirit of a Northern people is in Hockey. Not just watching the Wild clip out another win on the road and enjoying our moment of fame, but really getting to know what makes the sport a way of life. It’s a metaphor of who we are as a people, written in small moments of remarkably intense emotion.

It’s worth getting to know, especially if the Wild keep up their amazing run. Go Wild!