Anyone angered by Coca-Cola’s Super Bowl TV commercial featuring a multi-language, multi-cultural version of “America The Beautiful” would be wise to avoid ice rinks in “The State of Hockey” these days. The face of Minnesota is changing, and so is the makeup of the young players learning the state’s beloved game.

“Pasalo! Mira!,” a Latina parent at Parade Ice Garden in Minneapolis called out at the rink on Hockey Day Minnesota last week. “Andale! Muy Bien!” Cheering for The Polars, a girls team mostly made up of Latinas and sponsored by the DinoMights. The mother’s Spanish cheers worked: The DinoMights won 10-6.

Started nearly 20 years ago with 12 kids from South Minneapolis, the DinoMights have grown to include 5 different teams for boys and girls of different ages, all coming from the Phillips, Powderhorn and Central Neighborhoods, some of the poorest and most racially diverse parts of the city. Aimed at providing inter-city youth with positive role models, the DinoMights program focuses on physical fitness as well as academic and spiritual mentoring.

Shelby Tuseth, a girls coach, is in her third year with the DinoMights. Tuseth played girls’ hockey in high school, in Minnetonka, and feels it’s a great way to build friendships. The team practices twice a week, and has one game, with additional tutoring and mentoring provided for the kids, aimed at not only the physical and academic well being, but also their spiritual health. Tuseth got involved with the team through the Kelly Phillips Foundation, one of the many partners of the DinoMights who help the organization going strong. 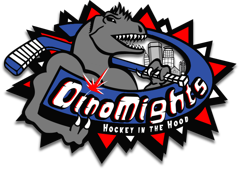 Charlin Dominguez, an eight grader, plans on trying out for the Novas, the Minneapolis high schools’ girls team, when she gets to Southwest High next fall. She joined the DinoMights because it seemed fun, and a way to meet new people. “I just wanted to be with my friends and play,” she said.

Kelly Haegle, a parent volunteer with the girls team, says that many of the kids on the team wouldn’t have the opportunity to play if it weren’t for the financial support the team offers, in the form of sliding-scale fees and free equipment use. On other comparable teams, young people pay up to $1,500 for equipment and fees, she says.

According to Harman, the founder of the DinoMights, John Foley, had been a youth pastor at Park Avenue Church, working with high schoolers. Foley realized that there needed to be something that served the kids from early elementary to high school, which was dedicated to long term relationships, Harman said.

Foley had met a group of kids at Central Park who were playing roller hockey. Meanwhile, he had a friend who went to seminary who gave him $5,000 to help him “do this hockey thing,” Harman said. 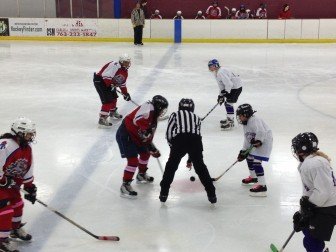 t: The Polars (in red) — the U12 girls team sponsored by the inner city hockey development association known as The DinoMights, squared off with an opposing team at Parade Ice Garden in Minneapolis on Hockey Day Minnesota. (Photo by Sheila Regan)

Youngsters come from the Phillips, Powderhorn and Central Neighborhood, and mainly were recruited from Green Central Park school and Anderson Open School. Since the DinoMights’ beginnings, the neighborhood has changed. “We’re much more Spanish-speaking that they were 15 years ago,” Harman said. Like the neighborhoods they serve, the teams have about two-thirds Latino skaters, and about 15-20 percent African American youth.

Currently, the DinoMights serve around 350 kids, with the central office still located at Park Avenue Church, though the nonprofit has always been independent from the church itself. Though the program offers spiritual mentoring, the youth are not required to belong to any particular faith.

The number one value, Harman said, for all staff and volunteers, is long-term relationships. “That’s how positive youth development happens,” he said. “Our mission is physical, academic, social and spiritual development with youth.”

In that vein, the tutoring program provides one-on-one homework help, but it’s also about building relationships. The tutors do homework with their mentees, but they also care about one another. “That’s really what makes it happen,” Harman said.

Meanwhile, the State of Hockey benefits by seeing the game being learned, and loved, by some of Minnesota’s newest families.

Or, as you might hear it said someday soon, at a hockey rink near you: