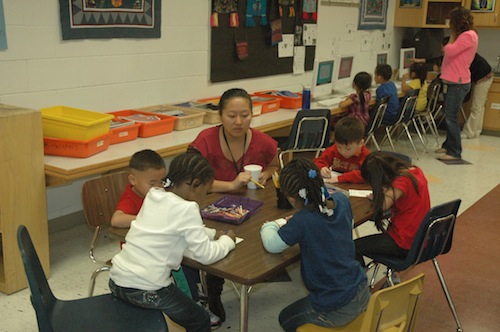 Hmong International Academy’s challenge is also its solution. The Minneapolis district school, which has struggled with low test scores from its inception five years ago, is a school, in part by design, that has an almost entirely minority population, and a very high poverty rate. But principal Andy Xiong sees the school’s focus on Hmong language and culture as a way to support its goals to improve what he calls “mainstream academics”— in other words, test scores in math, reading and science.

Hmong International Academy focuses on teaching academics through the lens of Hmong cultural heritage and language. It aims to address needs within the Hmong community to keep the culture alive, and to make sure that language and traditions are passed on to subsequent generations.

Hmong International began five years ago with 100 students, and after moving to different locations, finally settled on its currently location, Jordan Middle School. Last year was the first year the school was in a fixed site.

The school has also grown, from the initial 100 students to a current enrollment of 580 students total in various programs, including early childhood and High Five, with 480 of those students in K-8, according to Xiong. 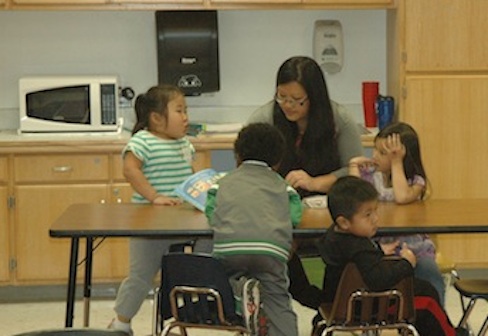 Xiong said students at the school follow one of two tracks. The first is the Hmong literacy track, and the second is the bilingual track.

“A lot of the kids have prior knowledge and experience in the cultural environment,’ Xiong said.

When Xiong began at the school, he established an honors literacy team. “Whether they are teaching in Hmong or not, the standard should be the same,” Xiong said. “

A main focus for Xiong since becoming the school’s principal has been in building connections with parents and the larger community. According to Xiong, many Hmong families are structured at a hierarchical level, and so relationship building needs to happen by first building relationship with family members. Once those connections are established, Xiong said, the school tries to reach out to the broader community, so that events are open not just to parents but to the Hmong community, and to the whole neighborhood.

Xiong also said there’s a transactional level of building those relationships. In order for parents to give up their time to come into the school, they “have to feel they are exchanging time to buy something else,” Xiong said. So for example, parents can earn scholarship money by taking adult learning programs, and can earn “points” by volunteering and being involved in the school, which they can exchange for various incentives, including drawings and prizes based on survival needs (such as a 25 pound bag of rice).  The school also collaborates with YWCA in its Beacons program. 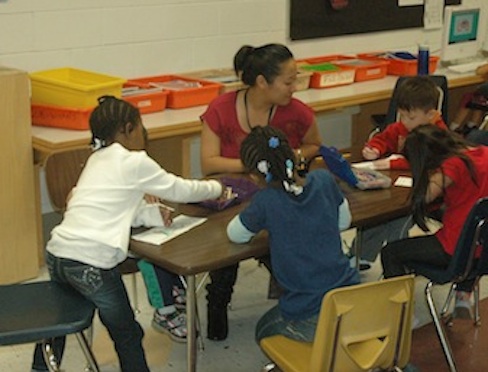 Last year, the school had a high rate of attendance, with only 40 dismissals and suspensions, the lowest in the district, Xiong said.

Va Vang is a parent with two children who attend the school, one in the High Five program, and one in first grade. “I’m very pleased,” she said. Vang attends the school when she is free from work, in order to observe the classroom. “The school is very good at helping Hmong parents like myself,” she said. Vang’s only complaint is that she wishes the cafeteria would serve traditional Hmong cooking. “This school is good for the Hmong community,” Vang said. She appreciates the community involvement that the school offers, and appreciates the education her children are getting, especially in the Hmong language. For instance, she’s pleased her children learned the Hmong names of different colors, which she didn’t teach them at home.

According to Family Liaison Kia Yang, there’s a high desire for many Hmong families to give their children a chance to speak Hmong in school, since many don’t use Hmong at home. The school’s ELL program, she said, uses English languages in reading and writing.

Yang’s job involves coordinating with the PTO to put on big events. She translates flyers for these events, she said.

For Yang, one of the difficulties with parent involvement is that sometimes parents don’t have a working phone, so if a teacher needs to talk with them about a child’s behavior, or not dressing in the proper attire, for example, that can pose a problem. 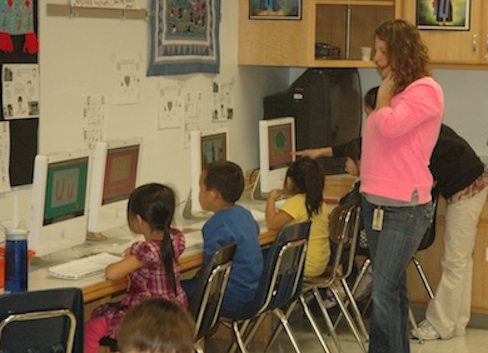 Though the school’s focus is on Hmong culture and language, it is also open to any family in the district, and there are students from the neighborhood, primarily African American, who attend the school.

Yang’s goal for this yea is to reach out more to African American parents, because there has been a lack of parent participation. “A lot of the parents want to be here, but they work, or might not be as comfortable in a Hmong-focused school,” she said.

Cicea Fletcher, an African American parent, was involved last year, and has attended events that were aimed at parents getting to know each other more, such as a field trip with parents to Orchestra Hall.   Fletcher has one child who went to High Five last year and is now in kindergarten at the school. “I thought it was excellent,” she said of last year’s experience. “The teachers were nice, and they help all the kids.”

Fletcher appreciates all the structure that the school has. In the long run, she feels having a bilingual education for a child will benefit her daughter.

Asked about disadvantages of the school, she said that she wishes there were more African American teachers, and she feels the class sizes are pretty large. In her daughter’s class, there are 22 kids and no aides, she said. While she really likes her child’s teacher, having a classroom with 22 five year olds can be a lot for anyone. “She’s just crazy at the end of the day,” she said.

Still, Fletcher is very happy with the school. “They’ve been very supportive,” she said. “Anything we needed was there for us. It’s a family oriented school and I like that.”

Academically, the school has some challenges. In 2010, it was identified as one of the state’s Persistently Lowest Achieving Schools, one of the bottom five percent of elementary schools receiving federal Title I funding with AYP status, according to MDE . It began implementing an intervention model during the 2010-2011 year, and has to submit quarterly progress reports and monthly updates to the state’s Office of Turnaround Schools. 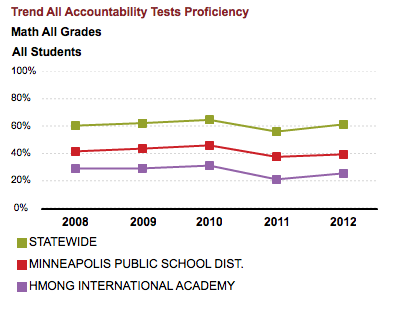 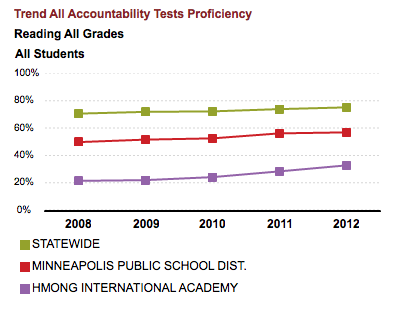 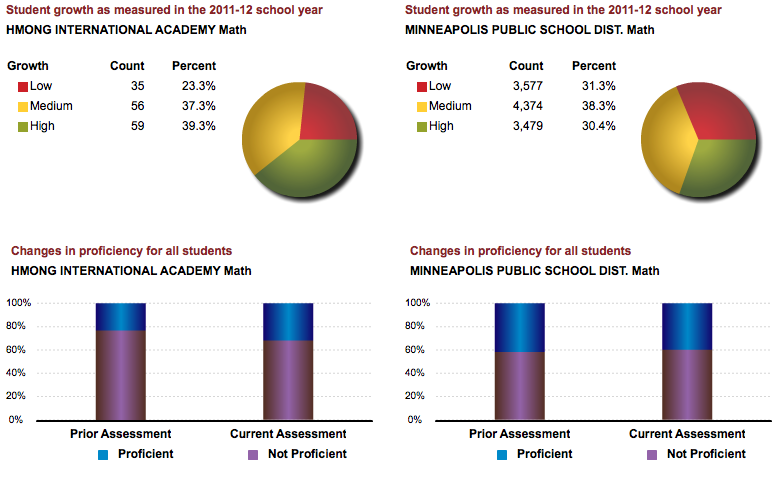 The school’s Multiple Measurement Rating (a measurement of school performance used for holding schools accountable under Minnesota’s approved No Child Left Behind waiver) has also gone up from 15 percent in 2010 to 28 percent in 2012, according to MDE.

Xiong sees the school’s focus on Hmong language and culture as a way to improve the school’s test scores and support the school’s improvement goals. “Whether teaching in Hmong or English,” he said, “the standard is the same.”