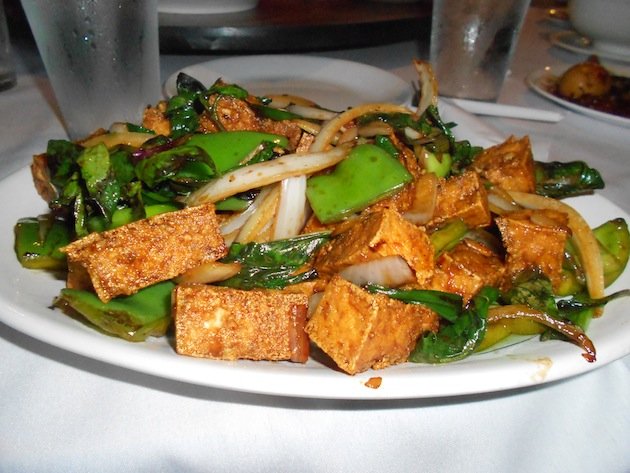 Hmong House transports the diner far from Minnesota by engaging all the senses. The wall-to-wall hand-painted murals of Asian landscapes are a feast for the eyes. The music, sung live during our meal, made us feel as if we were next door to a night club somewhere in Asia. We bumped elbows with hundreds of Hmong community members celebrating in the restaurant’s banquet hall, and enjoyed learning about their traditions from the restaurant’s owners, Kay Yang and See Yang. Most notably, the exotic flavors of the food transported us as well.

The restaurant has a 350-person banquet hall, which appeared to be filled to the max when my family and I recently visited the restaurant. Owner See Yang explained that a Hmong family’s children were throwing a party in appreciation of their parents, a “blessing from the son and daughter.” Our group sat in the adjacent dining room for smaller groups.

Hmong House features Hmong cuisine but also offers Chinese and Thai dishes. One of the favorite Hmong dishes in our group was the Five-Spiced Sweet Braised Pork, described as, “I didn’t know what to expect and it just has a very nice, rich flavor and I love the gravy,” “Love that Barbeque flavor,” and “It’s like Hmong stew.”

Another dish we enjoyed was the Khao Poon; curry noodles which were “lightly spiced with hints of ginger. Very rich.” The vegetarians’ favorite Hmong dish in our group was the Basil Stir Fried with Tofu, described as, “The best tofu I’ve ever eaten. Sometimes as a vegetarian eating out you feel kind of like you’re just along for the ride, but the meat eaters are really getting the better food. Not here!”

After our meal, I interviewed the owners about their restaurant.

TCDP: I’d like to ask about the food. Some of the flavors we recognized from other Asian restaurants, but your food seems to have a little different twist. Can you tell me about that? Who is the chef, and how did they develop the food?

HH: The chefs are relatives. They are George Yang and Thao Yang… In traditional Hmong cooking, we don’t have recipes. We just cook whatever comes out at the moment. But I had to come up with recipes to make sure it’s the same taste every time.

TCDP: How did Hmong House get started?

HH: I (See Yang) started in Georgia. In 2004, I opened a restaurant in Georgia for two years. We focused on mainly Thai food and sushi. I was rated “Restaurant of the Week” there. I was grateful to be able to put out good food. Then I divorced my wife and had to sell the restaurant. Then I remarried and came up here in 2008 and we wanted to start a restaurant. First, in 2010, we started a small restaurant in Hmong Village to test out the food. It took only a year and then we opened this restaurant in June of 2012.

TCDP: I first met you (See Yang) at Neighborhood Development Center’s 2013 Entrepreneur Awards, where you won the Community Impact Award. I’d like to know how this restaurant came to be a community gathering place. Did that take time to develop?

HH: Oh, no! The concept from the beginning was big groups. One of my challenges was to build this restaurant in time for the first event, Xiong United’s — a non-profit organization’s — fundraising event in the first week of June, 2012… I felt the need for a big restaurant like this because a lot of Hmong go to other restaurants and it’s not the environment they’re looking for. They don’t tailor the food like we can.

We want to cater to the grandparents because they won’t eat some of the more modern food. They will eat more boiled vegetables and a special type of rice that they want us to prepare in the “old style” and we can be flexible like that…

We also make a chicken and herb dish specially for women. One month after Hmong women give birth they can only eat that and steamed rice…

I want to tailor this food; not just to the Hmong community but to the whole community, to help them experience new food.

TCDP: Are there certain seasons when you are busier with community events?

HH: Constantly, year round we’re busy with some sort of event… blessings from the son and daughter, graduations, birthday parties, anniversaries, going away parties, New Year’s, Valentine’s Day, fundraising… just about any event.

CORRECTION: Removed “is” from first sentence – sorry! That was an editing-caused error, NOT the author’s error.