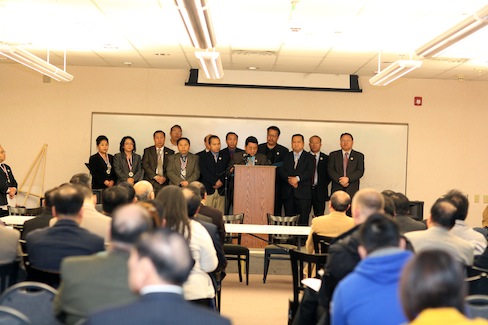 The Hmong 18 Clan Council standing before the crowd to issue a strong statement against violence and domestic violence. (Photos by Shia Yang)

The Hmong 18 Clan Council held an open community forum on Tuesday, April 8 to address recent incidents of violence that have alarmed the Hmong community. The forum, conducted in both Hmong and English, was attended by members of the St. Paul Police Department, the Sheriff’s Department, and Senator Foung Hawj, who joined more than 75 members of the community at Hmong Village in St. Paul.

Kevin Vang, President of the Hmong 18 Clan Council, began the forum by holding a moment of silence in remembrance of the victims of the recent crimes. On behalf of the council, Vang issued a strong statement against domestic violence. “We have suffered terrible losses,” Vang said. “Some say it’s an individual problem, but that is wrong. As a community I think we can solve this problem. We must work together to eradicate it around the nation.”

The two most recent cases of Hmong-on-Hmong violence were the killing of Panhia Yang, 27, and her brother Kong Meng Lee, 18, by Yang’s husband, Chue Lor, 31. Lor, who then killed himself, and Yang were known to be in an abusive relationship. The other incident happened outside Moonshine Bar on the Eastside of St. Paul, where Cher Lor, 28, was stabbed to death.

To the families of the victims, Vang expressed that the Hmong 18 Clan Council shared in their losses: “You are in our prayers. It is our hope that together will seek the help we need. We are here for you.” Vang also made a point of asking the community at large to not judge the Hmong community, as domestic violence is a prevalent issue in every community. Vang strongly urged anyone in a domestic violence situation seek help immediately through their families, resources, or through the help of the 18 Clan Council.

Both St. Paul Chief of Police Tom Smith and Ramsey County Deputy John Kirkwood spoke about how the St. Paul Police Department has been increasing collaborations and partnerships with the Sheriff’s Department and with the Ramsey and Hennepin county attorneys in order to best prevent more violent incidents from happening. Both shared information about advocacy programs including the St. Paul Intervention Project and Bridges for Safety, both of which have Hmong advocates. The 18 Clan Council also mentioned their newly instated crisis hotline at 651-489-8373. They said this hotline would connect callers to a designated member of the Council. 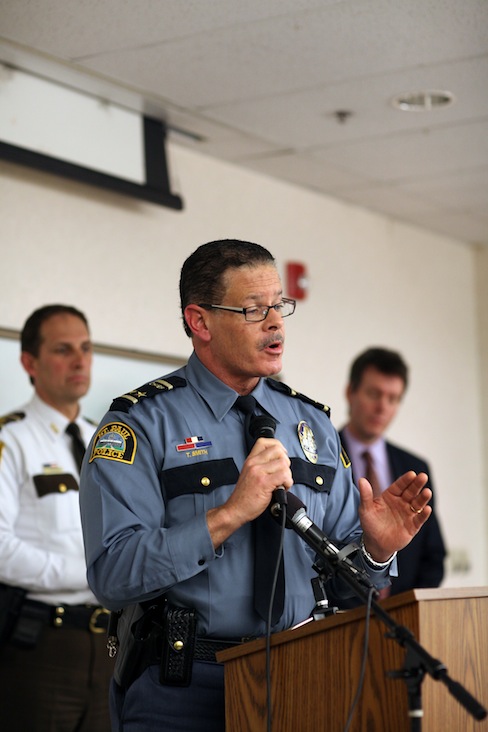 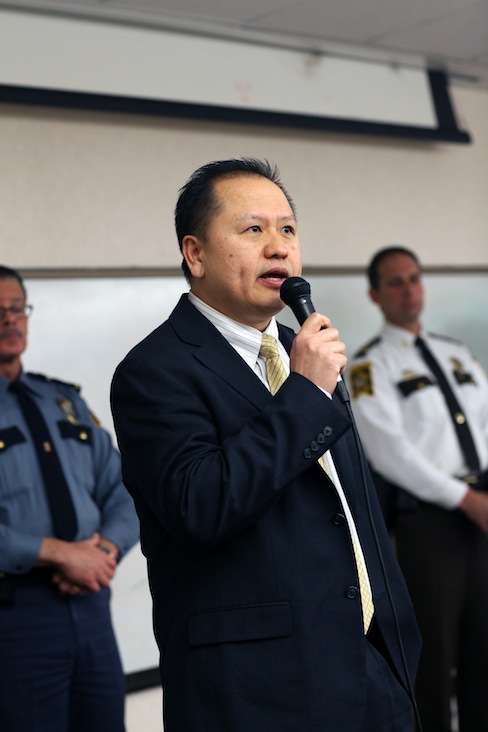 Left: Police Chief Tom Smith speaking to the community about prevention, resources, and expressing his condolences to the victim’s families. Right: Senator Foung Hawj attended the event, being a representative from the Eastside. He stated that his doors are always open to the community and to law enforcement.

During the forum portion of the event, many of the members of the community voiced their concerns, addressing an array of problems including proper financial resources, the prevalence of mental health and substance abuse issues in the Hmong community, and the lack of female presence in attendance and in leadership roles.

Ly Vang, Executive Director of the Association for the Advancement of Hmong Women (AAHW), inquired about the Hmong 18 Clan Council’s next steps of action, mentioning that since 1979, when the first case of Hmong double homicide was reported in Wisconsin, there was very weak action in addressing the issue. “You want us to be responsible for our families, but you are our leaders. Our leaders have not taken action–how can we help our people? What are the leaders going to do?” she asked.

“It’s not just a Hmong cultural issue, it’s a structural issue,” said community member Bruce Yang, a doctoral student at Mankato State University. “If anything is going to happen, it needs to be structural change. Our Hmong women can’t do it alone, and neither can our Hmong men. We need to come together as equals in order to move forward in this world. When we’re fighting against one another over trivial things, when we’re divided, we don’t stand a chance.”

Concerns were also expressed by community members about the lack of police follow-up in the case of Panhia Yang, some even saying this was a case of racism. Chief Smith answered that both emergency and non-emergency calls weren’t direct lines to the police, but rather to dispatchers handling cases based upon priority due to urgency. He stressed that callers should not be shy about addressing their needs in order to be placed with higher priority on the police responder list.

“Let us learn from this experience and take responsibility for our families,” Vang said. “We must help one another. We must do better than that. Stop the fighting and killing. These things are not important for the Hmong—ways of love and respect are.”