We have former President Jimmy Carter to thank for the rise in craft brewing, and the Venetians for our clear beer glasses.

Ryan Petz from Fulton Brewery and Bryan Ethier from FOCI Minnesota Center for Glass Arts came together to present a fact- and fun-filled salon at the American Craft Council Nov. 14. That’s “salon,” not “saloon,” though they treated about 75 attendees to beer tasting. There was also the opportunity to vote for their favorite drinking vessel handcrafted by various FOCI members.

Petz told how he and his brewing buddies started in a basement, moved to a garage and then a bigger garage. Finally, in spare time between business class sessions and lacking an internship, he pursued brewing as a business, taking the company to the point of contract brewing through a Wisconsin connection. Gradually, all four partners were able to make Fulton (named for their neighborhood) a full time proposition. They opened their own brewery and tap room near Target Field in October 2009.

They will be opening a new larger production facility in Northeast soon, though no tap room (the “Surly” law only allows one tap room per company). The expansion will allow more experimentation at the original location.

Most craft brewers started in their homes, a practice effectively outlawed until 1979 when (according to Wikipedia) “President Jimmy Carter signed into law a bill allowing home beers, which was at the time not permitted without paying the excise taxes as a holdover from the prohibition of alcoholic beverages (repealed in 1933). This change also exempted home brewers from posting a penal bond (which is currently $1,000) which had the prohibitive effect of economically preventing brewers of small quantities from pursuing their hobby.”

Craft brewing describes making beers that are more like what a consumer can find in other countries, or that use unusual ingredients to add flavors. For example, there are beers with a hint of clove or nutmeg from the type of yeast used. The four main ingredients in a beer: Water (Minneapolis water is great, Petz said), malt to provide the sugar content (any sprouted grain that’s been roasted; the degree of roasting determines the color), hops for aroma, flavor and bitterness, and yeast to promote fermentation (sugar into alcohol) and part of the carbonation.

Craft beers represent 6 percent of all beer sold in the U.S., Petz said, and the industry has created jobs. Fulton has 32 employees, 16 of whom are full time. “We keep good relations with other craft brewers,” Petz said. Rather than seeing each other as competition, “We grow the interest in what we do, constantly improve product, and create demand for craft. We’ll win by getting the other 94 percent.”

“The Sumerians were making beer 7,000 years ago” but it would be another thousand years before they’d drink it out of a glass (early vessels were pottery), FOCI’s Bryan Ethier told the group. In 200 BC the Syrians invented the blow pipe, used first to create bottles. That paved the way for clear glass drinking vessels. The Romans set up glass studios wherever they conquered, but when the Roman Empire fell, glass blowing was lost in those regions.

In Venice, however, “the capital” of glassmaking, they carried on, craftsmen passing down knowledge through generations, guarding their trade secrets. They had easy access to seaweed and plants for potash, and marble dust from marble stone, key components of “crystal.”

The first windows came from big blown cylinders flattened out and cooled off. Bottles, by the way, are now mass produced by dropping blobs of molten glass into molds and injecting air; they cool on the conveyor belt to the next step. And window glass is either floated molten on a sea of hot tin or pulled by surface tension on steel dipped in the glass.

Sciences such as chemistry and optics advanced because of glass; in fact it was often the glassmakers who were the alchemists, Ethier said. Where society needed windows and drinking glasses, science needed lenses for telescopes, and thermometers. The glass makers needed flasks to store the reactive materials such as colors they needed in their processes. “Glass is inert, it doesn’t react, except to hydrochloric acid.”

Ethier showed, from the table of samples created by FOCI members, drinking cones which may seem impractical to us, but useful to anyone out in the wild—they could just plant the small end in the ground between sips. Boots and cones were used in drinking games, wagers on drinking a whole “yard” of beer without dousing themselves. A wide Norwegian drinking cup looks more like a two-handled gravy dish. 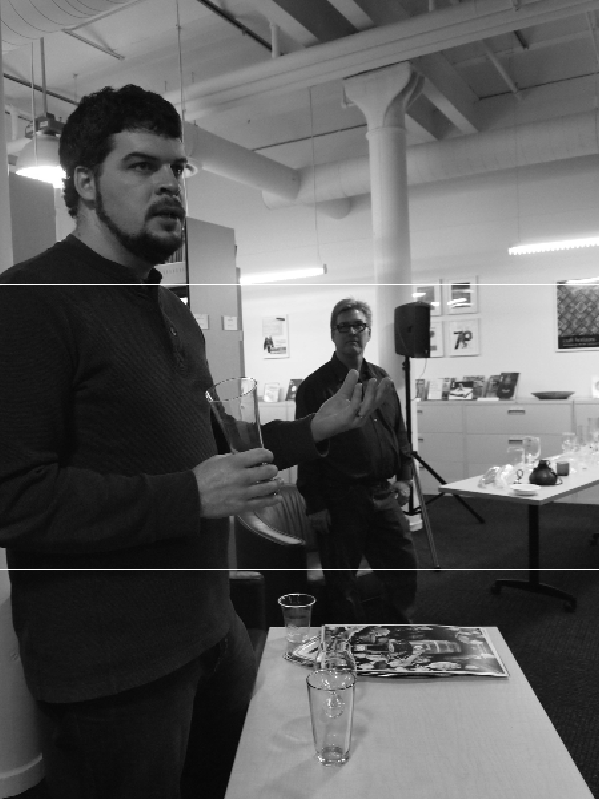 Does it matter what glass you drink your beer from? Not really, but there is some logic to three basic styles. The Pilsner glass, wide at the top and thin but solid glass at the bottom, helps keep beer at its ideal 38-degree temperature, as the drinker’s hand can’t transmit as much warmth through the glass. The shape encourages the carbonation to keep forming a head of foam, which maximizes the scent and gives a visual cue that it has not gone flat. “They say it’s also a feminine archetype, but that’s a little too deep for me,” Ethier quipped.

The standard 16 ounce bar glass is utilitarian, easy to stack and hard to break if it falls.

A tulip or goblet glass is perfect for a 10- or 12-ounce pour of a stronger beer or one meant to be consumed warmer. The shape encourages the user to cradle it in the hand, transferring heat which unlocks the aromas, and the narrowed neck concentrates the aroma.

Petz discussed brown glass, which filters out UV rays that would cause the hops to oxidize and make beer “skunky.” Clear and green glass don’t provide that protection. Light, heat and oxygen are beer’s enemies, working so fast that the last few sips of an ale consumed outdoors is going to taste different than the first few.

“Where did the term “growler” come from?” asked an audience member, about the half-gallon vessels a beer drinker can take home. Each told a story. Ethier: People used to take home two-liter pails of beer from the bar, and they would be growling about it if it wasn’t filled to the top. Petz (though he said he liked Ethier’s story better) said some of those pails had lids, and the carbonation would come out, releasing a growling sound.

The craft beer and craft glass talk was part of a salon series at the American Craft Council, held on the second floor of 1224 Marshall St. NE. For information on the Dec. 12 salon, on making fiber ornaments, go to the website, www.craftcouncil.org.