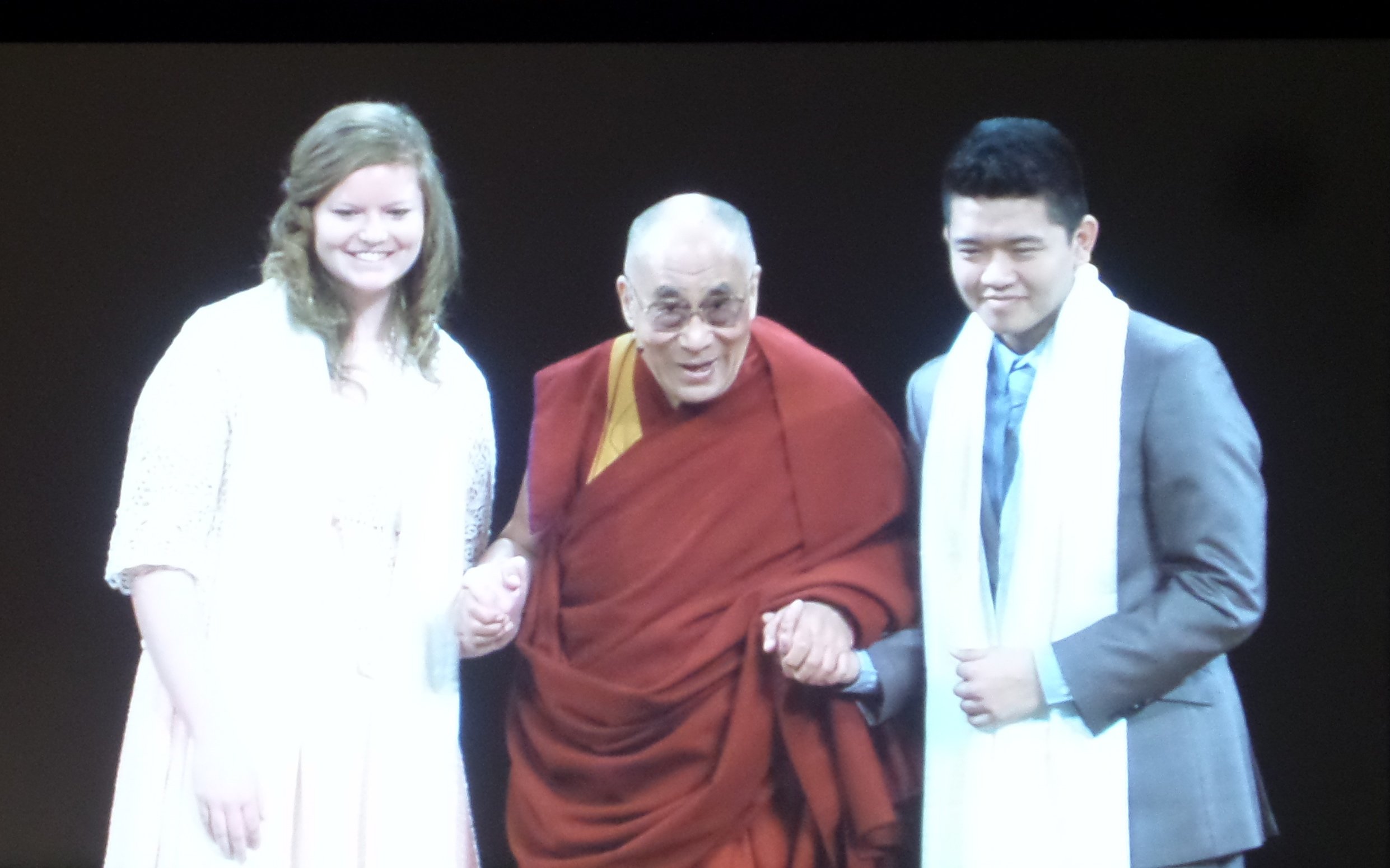 Give yourself a gift this week, and enroll for one or more days of the rest of the Nobel Peace Prize Forum at Augsburg College, Minneapolis MN (Friday through Sunday Mar 7-9). Here’s up to the minute information.

And since the Dalai Lama speaks from a global perspective, here are some interesting maps to help make a little sense of this interconnected world in which we live.

We went to Day One of this years Nobel Peace Prize Forum specifically to see and hear the Dalai Lama. The rest of our day was too busy with other events, so we were at the Convention Center for the morning session only…along with 3200 others there to share in a piece of history.

My meager efforts were to try to listen, observe and take a few photos, a couple of which follow.

Most readers probably have at least heard of the Dalai Lama. At this website, there is a link to the entire program we viewed in person. The program begins at 56 minutes with Tibetan dances, with the Dalai Lama speaking at 1:20. Give yourself a gift, and listen in. You, better than I, can interpret the meaning of the formal proceedings.

For myself, I found myself translating His Holiness’ words about Peace to those of us sitting in the comfortable seats of the Convention Center auditorium.

Anyone wanting to see the best of contemporary American society needed only to look at the very orderly throngs waiting to go through security. We lined up, snake-like, with no ropes, back and forth in the expansive lobby area. We moved slowly but steadily to our destination. More than once one of the security people complimented us on our group behavior. It was an opportunity to either be contemplative and/or to strike up conversations with nearby neighbors. In front of us were two folks from Bismarck ND, a Mom and daughter, who had driven several hundred miles for this event. Being North Dakotan myself, we had a common ground beyond the usual small talk.

Security was for a reason, and as informal as possible. Inside we took whatever seat was available, waiting for the program to begin.

In essence, this crowd practiced the ideals you can hear Dalai Lama speak about in his presentation.

After the obligatory introductions and opening remarks, came time for His Holiness to be introduced. A student from Concordia College, Moorhead, Anastasia Young, had the honor of introducing Dalai Lama. You will note a very moving and humorous moment as she is reading her introduction. An impish Dalai Lama was, in a sense, sneaking up on her from her right, and she wasn’t immediately aware of him.

It was a wonderful moment among many memorable moments.

At the end, shawls were presented to Dalai Lama, and he in turn presented them back, to Anastasia Young, and Tenzin Yeshi Paichang, student at Augsburg, who had delivered the questions to the question answer part of the program. The student had, at two years of age, played two year old Dalai Lama in the 1997 film, Kundun, about his life.

Enter Dalai Lama in your search engine, and you will come up with any number of items.

Later in the day, break out sessions talked about many aspects of Faith and Peace. Some weblinks that seemed interesting from the program booklet are these: Forgiveness 360; Nansen Dialogue Network; and the film, Ten Questions for the Dalai Lama. 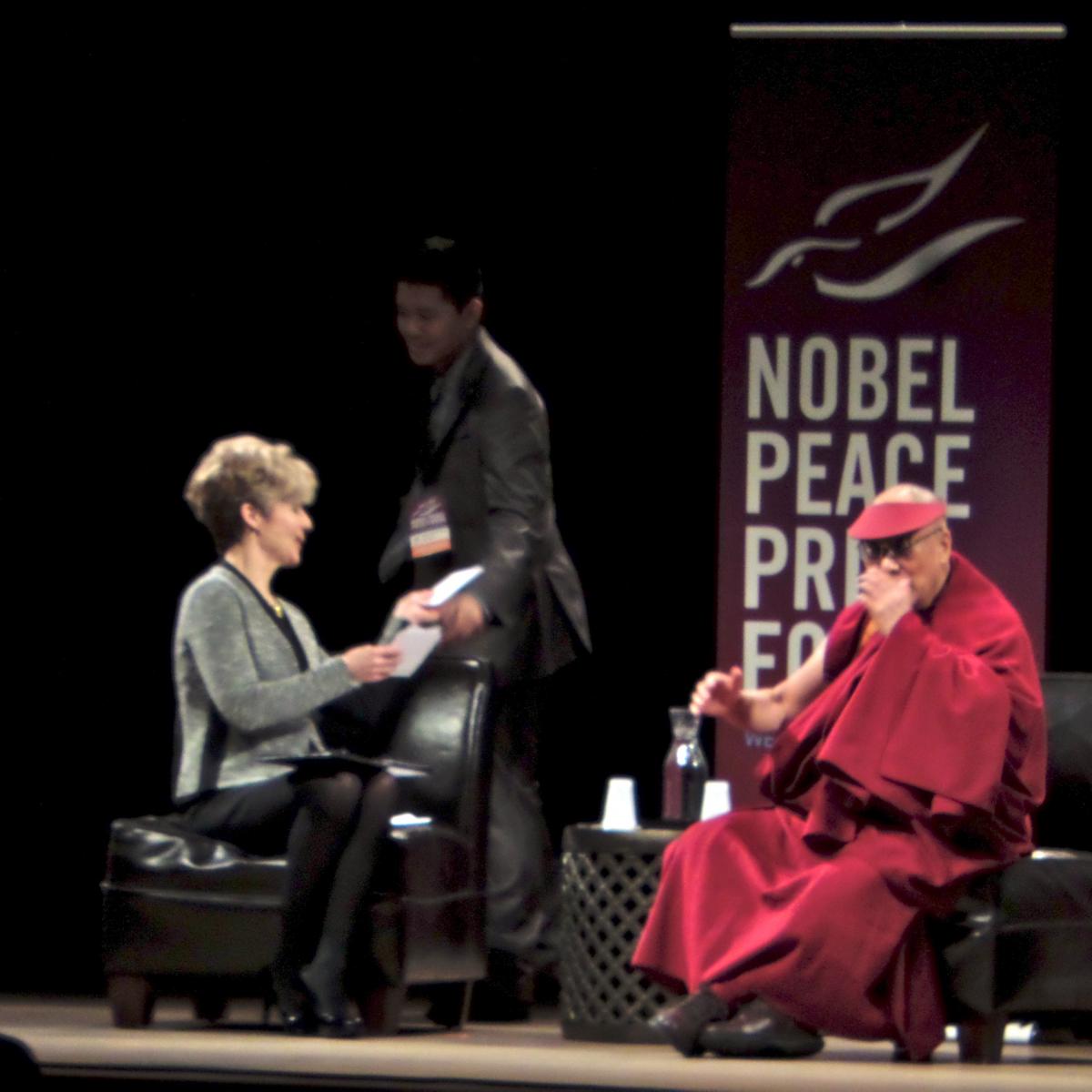 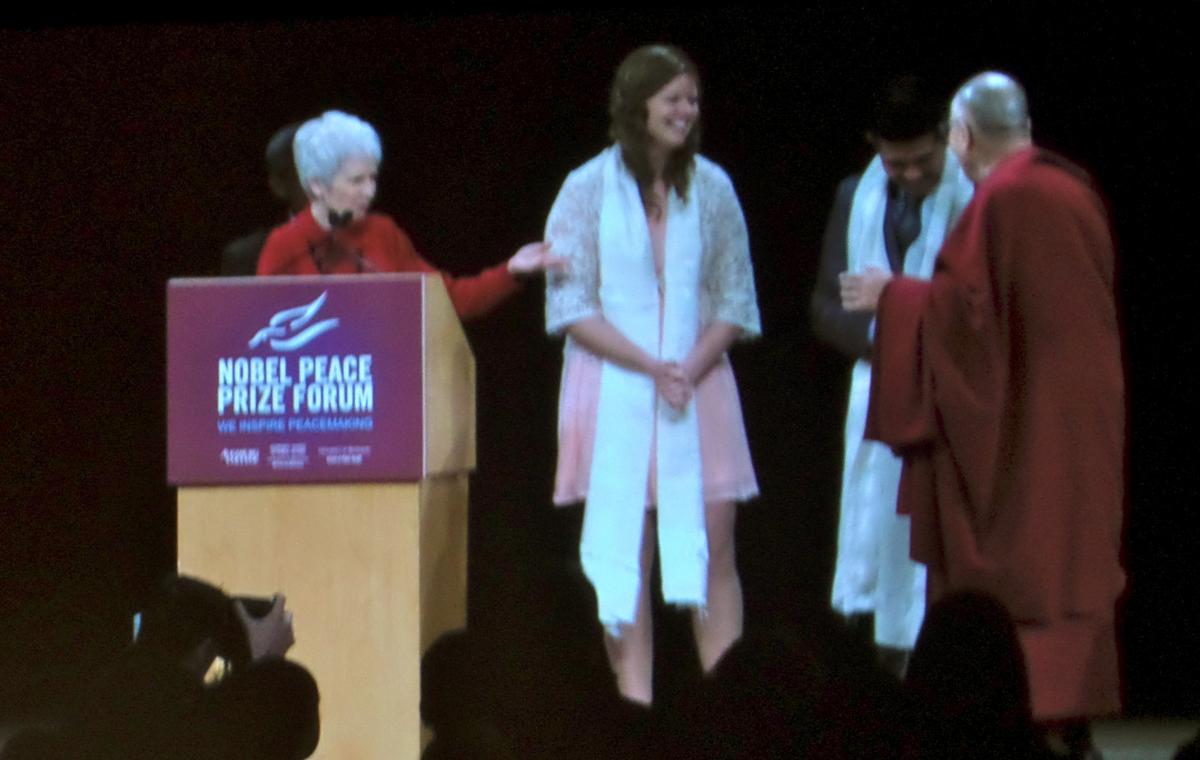 POSTNOTE: Changing the course of human violent behavior is as essential as it is difficult. Back home, preparing for another event in our home life, I watched part of two History Channel programs, the first about the end of the Vietnam War in 1975; the second about “Superpower”, the notion that America is the one remaining superpower, with a presence everywhere on the planet. In both cases, what came across clearly to me was not our omnipotence, but our impotence about controlling everything, everywhere, any more.

We live together, or we all are, literally, “history”.