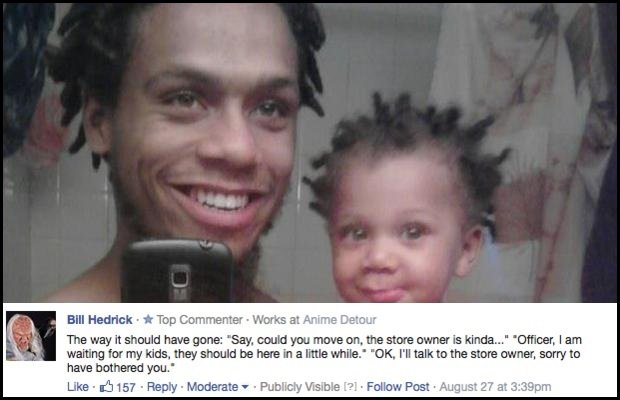 More than 800 comments poured in after video surfaced of St. Paul resident Chris Lollie being tasered by police for not revealing his name while he waited to pick up his children from daycare. Lollie is black and the three officers in the incident are white. Discussions on the article ranged in perspectives, but got heated as people discussed police brutality, experiences of racism, and the video-in-question.

Most comments fell into two camps: questioning the legitimacy of the video or the legitimacy of the officer’s actions. Others tried to make sense of the din, either sharing their own similar experiences, discussing the city ordinances of public spaces, or the motivations behind police actions or Lollie’s decision to post the video. Charges against Lollie were dropped in July and Lollie said he plans to file a federal lawsuit against the officers involved.

Comments from the article are highlighted below.

JM Griffin tried to understand Lollie’s potential motivations, asking why he had been “making it a race issue” in his video.

Jeff Bonczyk commented, saying he doesn’t believe Lollie’s experience was due to a race issue, rather a police problem.

Tiffany Vang, on the other hand, called out those who attempted to justify police actions, reminding people of the historic relationship between police and black men.

Johana Mitchell commented, looking for a way to act in support of Lollie.

Matthew Red expressed his understanding of the officer’s actions, calling others out for assuming the SPPD officers actions were racist.

While Glenn Hefley chose to see the glass half-full, albeit a rather small glass.

Do you see yours above? Have anything to add? Let us know below.