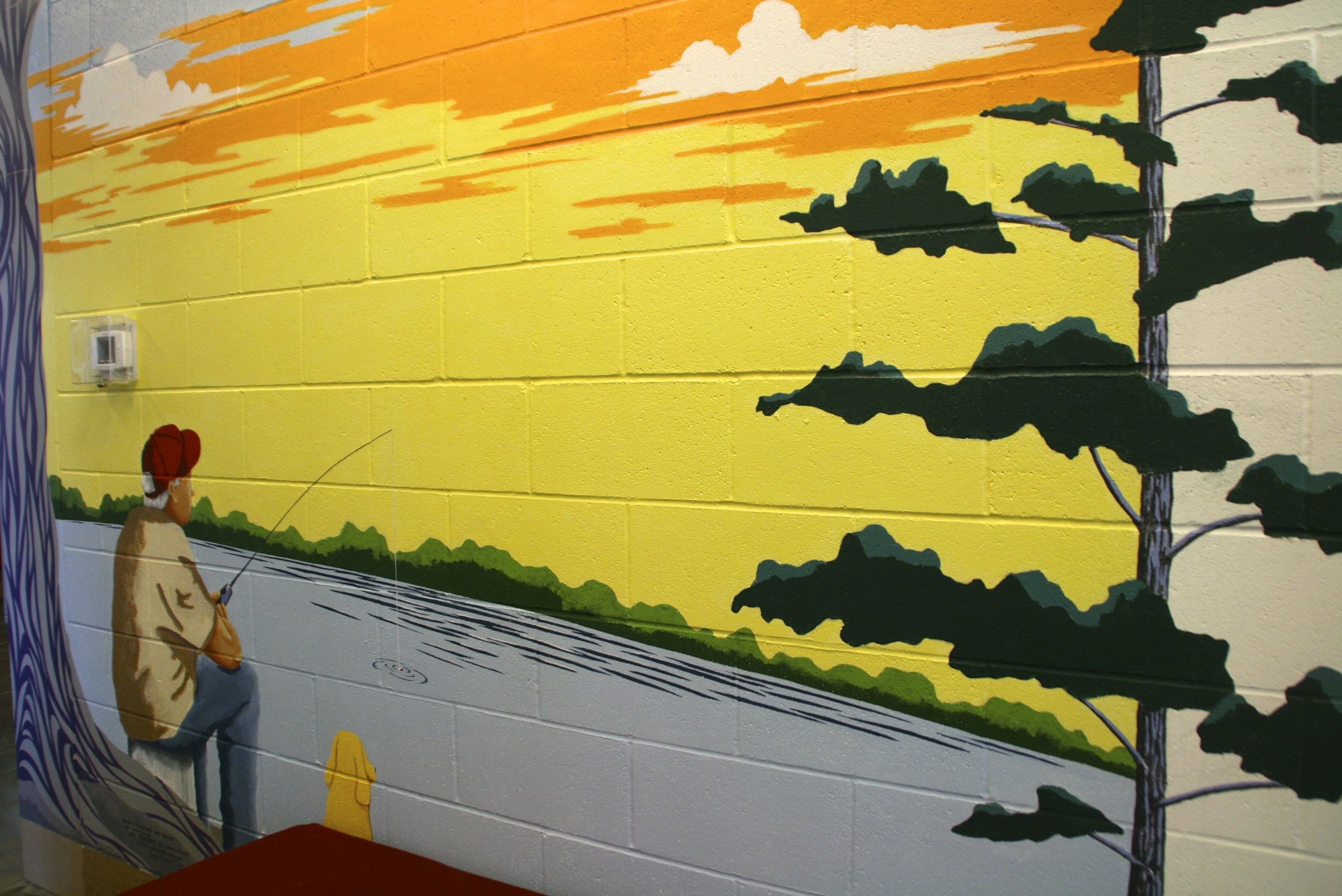 It was late morning at Higher Ground, Catholic Charities’ shelter for homeless men. The lobby was deserted, except for the woman running the front desk and my tour guide, client advocate Dan Lauer-Schumacher. The emergency shelter closes just after breakfast at 9:00 am and opens again at 4:00 pm in time for dinner. Other parts of the shelter are open throughout the day.

Higher Ground opened in June of 2012, built to support a new charitable concept – don’t just give the homeless a place to sleep, give them a way out of homelessness and poverty and help them become self-reliant.

The emergency shelter is just the beginning

The new shelter, a seven-story, $14 million building in downtown Minneapolis, is bright and sunny, with a lot of natural light, offering a sense of comfort along with a place to sleep. The men coming to the emergency shelter enter on the side of the building, part of the “good neighbor” policy to keep disruptions away from neighboring businesses and higher-end condominiums. The side door has a large awning to protect waiting men from the weather.

Located on the edge of downtown Minneapolis, Higher Ground has easy access to public transportation and social services, said Lauer-Schumacher . “A lot of shelters are hidden away, hard to get to for people without a car.”

The 120 beds on the shelter’s first floor – the emergency shelter – fill up quickly. There are bed linens for each man, a space at the foot of each bed for men to stow their possessions, and electrical outlets to charge cell phones to help look for work and connect with services.

In the old shelter, men slept on thin, bare mats laid out on the floor, a couple of inches apart, said Lauer-Schumacher. “It wasn’t dignified. The old shelter was in a building that never meant to be a shelter. The men had no linens, no pillows and had to sleep with their arms around their possessions to guard against theft.”

“At the old place, between thefts and fights, we’d have 40 to 60 incidents in three months. At the new place and in the same time frame, we had only three,” he said.

An estimated 25 percent of the men who stay at the emergency shelter have regular jobs. Others do pick up work when they can get it, but said Lauer-Schumacher , many are unable hold down steady jobs. “The biggest cause of homelessness is mental health problems,” he said. “They suffer from clinical depression or anxiety. Some are schizophrenic or have schizoaffective disorder. This makes up the vast majority of the long-term homeless.”

‘Pay for Stay’ is the first step out of homelessness

On the floors above the emergency shelter are other options, the next step in a path out of homelessness. Pay $7 a night, $42 for a week, to step up to the 2nd-floor “Pay for Stay” area. The money paid in is banked, the shelter returning up to $500 for security deposits when residents are ready for permanent housing.

Of these men, 75 percent have jobs and the rest receive social security or veteran’s benefits. “The idea behind ‘Pay for Stay’”, said Lauer-Schumacher , “is that it is hard to gain headway if you have to worry about where you’ll sleep tonight. The men on these floors are assigned a bunk with a locker and a key. Having a locker is critical. You can’t go to a job interview with three backpacks. It helps men get regular jobs or move from part-time to full-time positions.” There are also showers and a laundry.

“Pay for Stay” has a TV lounge, “to help the guys feel normal at work,” he said. “They can talk about shows or a ball game at work, just like regular people. Here you can reserve a bed, so if you work second shift like a lot of these guys, you don’t have to worry about getting off work and having nowhere to go.”

“A lot of them work warehouse jobs, construction, security and landscape or snow removal,” he said. “They work 32 to 40 hours a week, but they make less than minimum wage. There’s not much affordable housing for them, but two-thirds of these men will eventually be moving to market rate housing, most within the 90-day time limit.”

Even for the long-term homeless, there is dignity

“We have client here who’s been homeless for 22 years. He’s schizophrenic,” said Lauer-Schumacher “We can’t even find a real name for this man so we can’t make a social security match. He’s had some arrests, mostly for things like loitering. He thinks that someone is out to get him. We’ve even checked with the FBI. We can’t find anything,” he said.

Here, clients live in dorm-like settings, with small 15 ft. x 18 ft. private rooms and a community area that includes a kitchen with dry storage, an oven and a stove. The private rooms are fully furnished, including a mini-fridge and a microwave. There is a free laundry room and a TV lounge here, too. A separate entrance, on Glenwood allows men to come and go as they please and pick up messages and mail from family, friends or a prospective employer. It’s a place where grandchildren can come to visit without fear or embarrassment.

A real place to call home

Take the elevator to the seventh floor and you’ll find 11 efficiency apartments with stunning views of downtown Minneapolis. Some who live here once had very different lives. It’s the only area at Higher Ground that includes women. (There are other shelters serving women in Minneapolis.) One woman, “Julie,” had been a bank vice-president and a mortgage lender for more than 20 years. Because of a series of bad breaks, she ended up homeless, living with friends and on the street until she found a place at Higher Ground.

She said that her apartment is a place where she can live a normal life, a place to call home. She hopes that some day she can get another job and a have chance to pay it forward.

The units cost 30 percent of residents’ income, often derived from Social Security or other benefits. Of the people living in these apartments, 25 percent will probably leave for traditional housing within a year. Another 25 percent will move, but will still need help with basic life skills before they’re ready. “The rest will stay, in a place guaranteed as long as they have a need,” said Lauer-Schumacher. “We’ve learned a lot in the past year. I’m glad we can do this. It’s important to help these people make better lives.”

A mural in the lobby area of Higher Ground.

A view from the 7th floor studio apartment area.

An address means a legal home.

Higher Ground is a new concept in helping the homeless.

Lauer-Schumacher stands in the new emergency shelter area of Higher Ground. Men will start arriving and claiming beds at 4 pm.

TV rooms make life a bit more normal for homeless men who stay at the shelter.